BBC4 had a Blackpool night recently. The place appeals to me in the same way as David Thewlis described it in the programme in which he was filmed visiting old haunts in his native Blackpool: kitsch, thrill-seeking, superficial (knowingly so and loving it), a bit like a cheap version of Hollywood or Coney Island.
I captured these images of Sixties girls on Blackpool rollercoasters: 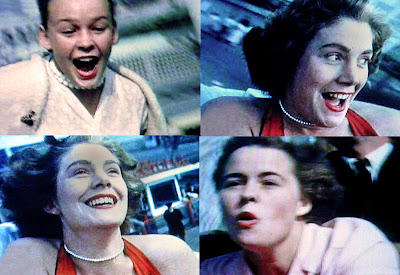 Blackpool has a special place in my heart at one remove, because my granny was obsessed with it and I've inherited her scrapbooks full of photos and postcards of the town. 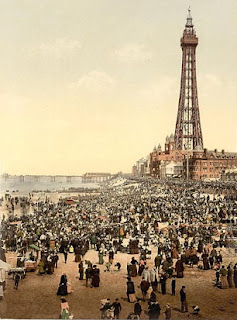 Wow, I've just discovered from Wikipedia that Blackpool was the first town in the world to have electric street lighting. Its love of artificial light and the desire to stay in the vanguard of electrical wondrousness must have grown and grown until it became the surreal excess of the illuminations. 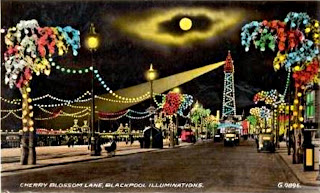 When we lived in Hebden Bridge, a few years ago, I'm sure I remember the (wonderful) local baker's still closing for a 'Wakes week' each year, the traditional week in each mill town when the factories would close and all the workers would head off on holiday, a huge number of them to Blackpool -- even if the weather was often awful: 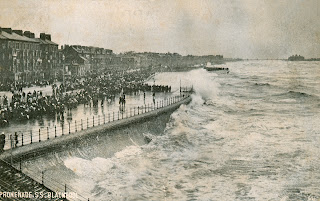 In its heyday, up to seven million people a year went there for their holidays. It hadn't quite reached that zenith when this photo was taken in 1907, but the flying machine looks scarily ahead of its time. 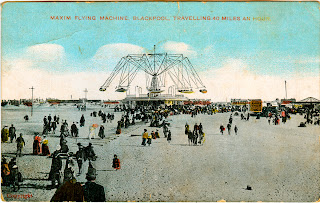 I only ever went on holiday to Blackpool properly once, with my granny and her second husband (I wasn't allowed to call him 'grandad' as my mum disapproved of him). We weren't the sort of family who went on holiday together, so it was quite a big deal. In fact I didn't want to go at all, being a highly snobbish child and having picked up on the idea that Blackpool was somehow 'common'. But I think my mother must have asked them to take me because she was going through a rough patch with my dad and needed a bit of breathing space -- that's my theory anyway.
This is my granny in Blackpool at about that time (maybe a tiny bit before), the late Sixties: 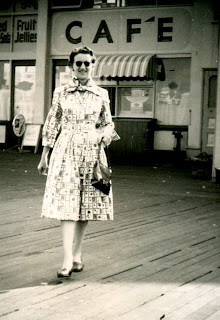 I must have been nine or ten. I have only patchy memories of the holiday. I remember the drive there over the Pennines from my home in the Yorkshire Dales and the first sight of the magical tower. I remember a new pair of purple Crimplene trousers. We stayed in a classic lodging house but I can't remember what our specific accommodation consisted of. Surely I must have had to have a room of my own, but that's almost unimaginable.
I must have been a strange child to take on holiday: refusing absolutely to go on any rides, sitting reading Puffin after Puffin on the beach. Oh, I've just remembered that we went to the pictures to see the Steptoe and Son film and I was horrified and thrilled at the scene where Steptoe has a bath in the sink -- and I've just discovered that film was released in 1972, so that confirms the year. 1972, and I was ten. Oh, we also went to Louis Tussaud's Waxworks and I shuddered thrillingly at the anatomical section with its opened-up women and graphic illustrations of the ravages of syphilis -- I'm sure I read that the Yorkshire Ripper was disturbingly influenced by the same exhibits.
In the course of our week away I became fixated on a little agate heart in the window of an antique shop near our lodgings. Yes, that's how strange a child I was. I had to have this little heart, and in the end I summoned up the courage to ask Granny if I could go into the shop and ask how much it was. I seem to remember it was rather expensive but I bought it with my holiday spends. I've still got it: 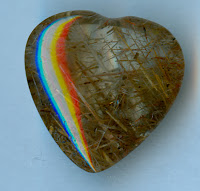 The coloured stripes are just from the scanner. It's made of 'hair agate' or possibly 'maidenhair agate', not quite sure. It's 1.25cm across. I still like it and feel it's a sort of talisman.
My granny had a penchant for saucy seaside postcards which she collected in a big album. There were two still in this wonderful paper bag that I found recently. She'd written her name on the bag too. 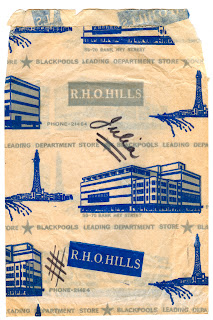 I'm absolutely positive I would have deeply disapproved of those cards if I'd known she was accumulating them.

I recently found a book that belonged to my granny. It was a novel set in Blackpool about music-hall singers and actresses. She had covered it, amazingly, in a fluorescent poster for a Blackpool show and all through the book she'd stuck in bits cut from brochures about Blackpool -- pictures of donkeys, of the promenade and so on, as well as affectionate descriptions of Stanley Park and the South Shore. It's quite an extraordinary object and I've discovered that this process of adding to books has a name -- Grangerising -- named after the Rev. James Granger (1723-1776), who promoted the idea of do-it-yourself illustration and a lot of use of the gluepot. I can't lay hands on this book just now, so it will have to wait for a later post. Finding out that there was a word for what she did made me ridiculously happy. 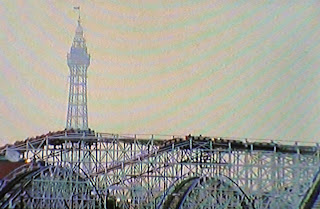 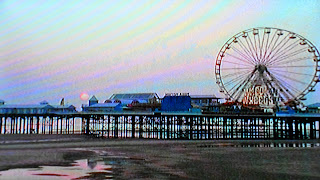 What a wonderful post! Absolutely fascinating reading about your granny and just how lucky are you to have so much of her memorabilia!??? Wishing I had "x-ray" eyes so that I could look inside that paper bag...... :O)))))))