Well, I'm just starting to question my motives in writing this blog a little bit. As usual, I'm conflicted. I am hoping to keep going and build this up, ideally acquiring some followers along the way. Naturally I want people to read what I've got to say and to like it enough to come back again. But at the same time, I'm more than aware of the public nature of such an undertaking. I should take a degree of care not to make a fool of myself or embarrass myself at work or with my family. My son has just started a blog, and I've said to him to imagine his headmaster and his granddad reading his posts -- if he wouldn't feel ashamed of them reading what he's written, I reckon he'll be okay.
My dad wouldn't be quite the right arbiter for my blog though -- he's too often puzzled by my enthusiasms. I've never forgotten when I was 17 and an au pair in Paris. I asked him to send me a cassette of Asylums in Jerusalem by Scritti Politti and he was very disturbed by the lyrics.  And he asked me, much more recently,  what the difference was between my 'mixed-media artworks' and 'colouring in'. What do you think? 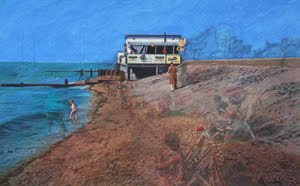 So I want it both ways: to be read but not to be laid too bare. It's a bit like the urge that propelled D and I to put ourselves up for Collectors' Lot a few years ago and, worse, when we went on Trading Treasures as well.
Collectors' Lot was, in theory, quite good fun. The episode we were on was a Christmas special and was being filmed at Gray Joliffe's house near Henley. Gray's Wicked Willie money had bought him a jolly nice house full of expensive 1980s glass furniture (it was the 1980s so he wasn't going in for a period look or anything). Alas, D got a stomach upset just as we arrived and was thus less ebullient in his presentation of our collection of miniature toy tellies than he might have been. As it was Christmas, I was doing my collection of cracker toys and had researched the history of Christmas crackers by contacting Tom Smith, the company that's been making crackers since 1847. I had all the facts at my fingertips. Alas, again, our show wasn't being presented by lovely Sarah Greene or lovely Sue Cook but by Bill Oddie, who seemed not at all interested in my cracker toys, or only in the tiny binoculars with the minuscule naughty pictures of ladies inside them. He had a huge Disney elastoplast on one of his fingers, and when he held my toys to the camera in the palm of his hand, all I could see was the plaster, like a giant blue tent. They did a take and I spewed out my potted history of crackers. Then they said they'd do another, so I moved on to something different, thinking it would all be edited together later. No, there was no editing together: the second take simply replaced the first, so my history of crackers never saw the light of day. I compounded the growing misery of this experience by falling over our box of tellies as we packed them away, cracking the screens of several and breaking off one or two legs. Awful.
As for Trading Treasures, the less said the better. We had the crew round to our house and they poked through our bits and pieces -- we quite enjoyed that. But the second half of the show was when we had to try to sell them at a car boot fair. As we had bought most of the things we were selling at auction or at fairs, everything was topsy turvy -- we were now trying to reverse the natural selling chain and sell back down to car-boot-sale buyers. It was hopeless. Our prices were far too high but we didn't want to give our nice things away for nothing. In the end, the retired headmaster and his wife (as I recall them) with their collection of metal things did far better than us. I think the fleeces they made us wear sapped our confidence.