Three years ago (three years already!) I went part-time for a year so I could do Art Foundation. Even though everyone else on the course was eighteen and I was in my forties (meaning, of course, that they mostly ignored me), it's probably the best thing I've ever done, making me feel at the time that I was finally taking the path I'd always wanted to take.

Sadly, the path didn't go anywhere much, due to reality putting up one of its little fences. I wanted to go on and do a Fine Art degree, and I had a place at the local uni, but it would've meant going part-time permanently and, things being what they are, that was too much of a risk (kids needing shoes, crusts, etc).

So the status quo prevailed, but I told myself I'd keep everything going by myself, I would be an art student in all but name. I would keep writing up the 'logs' of everything arty I did, with its columns for 'what I learned' and 'how I can develop this', and I have done. But, year by year, the logs are getting less and less interesting, with increasing gaps where I haven't filled in 'what I learned' yet. I'm not learning or developing very much any more. Sometimes, if I can't sleep, I try to think myself back into the state of mind I was in during the course, which was very stimulated, really helped by the modular structure and the achievable goals we were set. Everything flowed from looking at art then distilling out fresh ideas and realising them yourself.

Last November I went on a one-day course in 'image transfer'. This is something I've been trying to find out about for ages -- methods of transferring existing images onto paintings or fabric (a la Rauschenberg, amongst others). Experiments with thinners or sticky back plastic hadn't really brought the results I wanted. I thought I was finally going to be let in on the secret, but when I got to the course it was actually a machine-embroidery class. The teacher was into the idea of using iron-on T-shirt transfer sheets to capture photos and then stitching bits of them onto collages. It wasn't what I was expecting but I threw myself into it anyway. (Actually it was a bit odd because I was the only person who'd signed up for the class -- my only companion was the studio-owner's mum who was just joining in for the hell of it -- but I got a lot of one-to-one attention that day so can't complain.) Apart from putting the sewing-machine needle through my thumb nail at one point, it was a good day. I did this:

You can't really see all the machine stitching in this photo. Everything is traced round with stitching, and the 'nets' at the bottom are stitched. I got very excited about this new method and decided to buy a sewing machine so I could do more of it. Just after Christmas last year I bought a machine -- not top of the range but a couple of hundred quid. I thought it would be fine as all I'd be doing was freestyle stitching.
The first time I threaded up the machine, I got some wadding and a couple of bits of fabric, just as we'd done on the course, to test the tension of the stitches. As soon as the needle hit the layers, I knew something was wrong. The needle wouldn't gallop over the cloth the way the one on the course had: it was sluggish and unwilling. I felt the needle would break if I carried on. Once again, bitter disappointment and that awful sense of having made a mistake because you didn't know what you were really doing. Instead of pressing on, trying a different fabric combo, persevering, I just gave up. And I haven't really done anything creative since then.
It's been a bad hiatus. There's been other stuff going on -- won't go into it here -- but I do mark that moment at the sewing machine as some sort of defeat of the spirit. A quite unnecessary one, but when were spiritual defeats ever logical? The fact is I've done nothing for nearly a year.
It's got to stop. This blog is a good stick with which to 'encourage' myself, if not beat myself up. I think I will try to do some Christmas card artwork as a doable project.
These are my Christmas cards from two years ago: 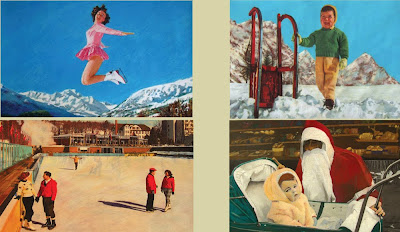 PS: I did eventually find out about a way to transfer images -- you paint over the image you want to transfer (or a copy of it) with a few layers of clear acrylic 'medium'. When it's completely dry, you soak the whole thing in water then rub away the paper from the back of the picture and the image is left behind on the dried acrylic sheet. Bit tricky but good effect.
Posted by Jane Housham at 09:09

possibly daft comment but you might just have threaded your machine up wrongly, or left the bobbing winder setting on?? i was heart broken when my new machine 'broke' after a few weeks only to ring the shop and feel a fool!
Get it out and have another try.

Yes, you could so easily be right, Becksini. I really should give it another go. Thanks for that.
Jane