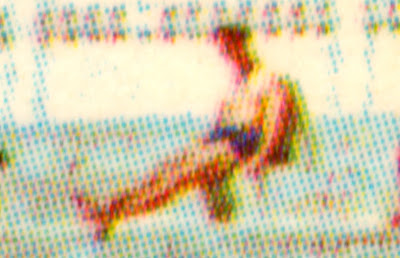 One of my favourite games is finding 'hidden' people in old postcards, like the chap above, who must just have been minding his own business by the pool when this postcard photo was taken in Portugal in the Sixties: 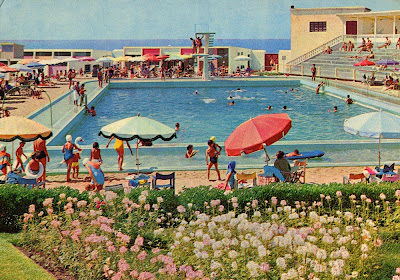 I like to imagine the moment when the shutter clicked -- all those people on holiday, having fun, unaware (almost certainly) that they were being captured on film and that their images would be sold in due course.
Here are some more 'incidental' characters from postcards:

It would make me really happy to think that I had stumbled on some private drama going on while the photographer snapped people unawares -- just like Blow-up!

Perhaps the child in that first image is lost, or the couple two along are meeting to plot a murder? Probably not.

Is that a ball game on the prom in the first picture, or a disturbing confrontation? Are those two ladies tussling over the picnic basket? I love the two girls with their lilo.

When you scan at 2400 times the size of the original, to ferret out these tiny figures, you get the dot pattern of the litho process in all its glory, which I also really like. I like it when the image pretty much breaks down altogether into fragments of colour, as in the first pic at the top.
Here are some of the cards these people were discovered in:

I have never looked at postcards in this way.... how FASCINATING! My other half was "caught" by Google when they were doing Streetview. He is there, on screen either opening or closing our wheelie bin! :O))))))))))))))))))

Love these images! I've been having fun blowing up vintage packaging images to reveal the dots. I love that effect.

I liked your speculating about the murder plot. It seems to fit, partly because the grainy images look like surveillance photos, but also because they have the look of 1960s films like Charade, or Hitchcock films. I'm sure Tippi Hedren is in there somewhere!

@MM Oh, I'd love to be 'immortalised' on Streetview (I think -- unless I looked grotesque, which I probably would). It would be like being 'eaten' by the internet.

@K&CElaine Yes, Tippi Hedren is definitely in there somewhere, carrying a lovely purse with a little gun in it. Would love to see your blown-up packaging -- can you blog it?
Jane