Ever since I discovered the Swedish Wallander series on BBC4 I've been getting keener and keener on Sweden. Then there was the Stieg Larsson trilogy and the great film adaptations made by the same Swedish production company that make Wallander. The Swedish settings of all this crime just looked so beautiful. I started learning Swedish in my car on the way to work ("Så gå vi på berg-och dalbana") and planning the perfect holiday in Sweden.

We were planning to go this summer, but just around the time when we were thinking of booking, the Icelandic volcano put it all in doubt. Being a naturally cautious person, I believed reports that said the volcano might go on spewing out ash for up to two years. We took the ferry to France instead. Hopefully it'll be Lund, Malmo and Skane next summer, and then maybe Stockholm the year after.

But my obsession with Sweden needs feeding, so I've taken to watching the country via its live webcams. This provokes a very conflicted response in me. On the one hand the idea of peering into another country in real time really appeals to me. On the other hand, taken together, Sweden's webcams don't seem to capture the beauty of Sweden, managing, somehow, to make the country look like it toils under the fag-end of Communism. Here's a selection of screenshots from live Swedish webcams this morning: 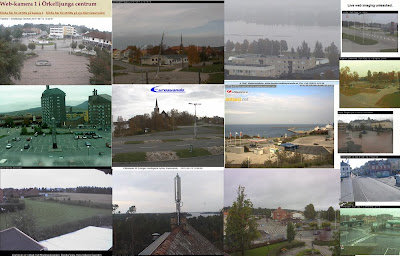 You won't be able to make out much detail, but you'll get the overall idea: empty car parks, deserted squares, grey playing fields. This doesn't square with my idea of Sweden but it's still kind of addictive. This is my favourite webcam:

The tide comes in and goes out; sometimes kids come and bounce on the trampolines in the middle distance or climb on the pirate ship. I've never seen anyone playing crazy golf. But this webcam has been frozen since August 28th so the wind no longer ruffles the bushes, no one bounces any more. I miss it. In fact I wass missing it so much that I emailed Skelleftea Kommun to ask them if they could possibly mend it. I was so pleased to get a reply: 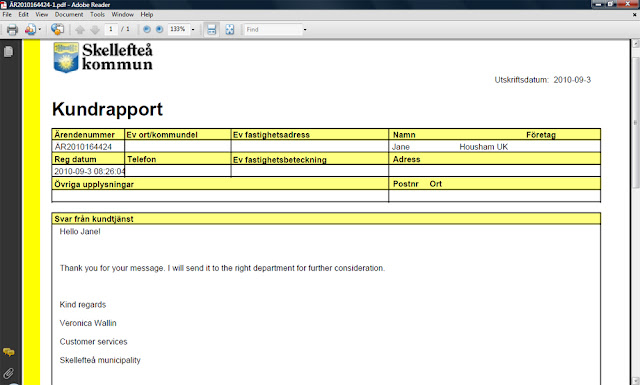 And then another one, from Roger at the Leisure Centre this time: 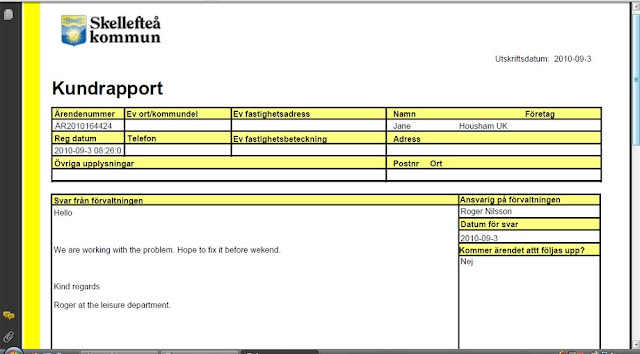 It's such fun! But, alas, the webcam is still broken. I check every day to see whether the live picture is back.

I still need my Sweden fix. My latest idea is to 'drive' round Sweden on Google Maps. This, admittedly, is a little bit tragic. I imagine I've flown to Copenhagen and have hired a car. I drive across the Oresund Bridge and into Southern Sweden: 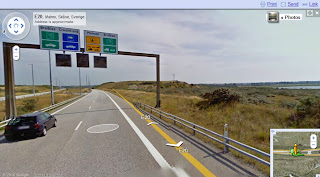 I spot Olafur Eliasson's 'Movement Meter for Lernacken' up on the hill to the right of the road: 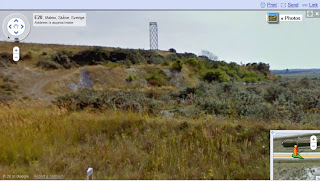 I recently found an article by Eliasson that really brings his art to life for me. I had never really 'got it' before. This tower works as a meter because it changes colour according to how far away from it you are.
Anyway, the journey continues: 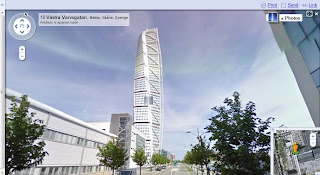 I reach Malmo and go to see the Turning Torso. It's kind of cool, but the truth is that 'travelling' in this way actually makes me feel travel sick. If you keep clicking on the arrows in Google Street View, you lurch forward along the markers, but it only takes a couple of minutes of that for me to feel completely nauseous.

So Sweden will have to wait for next year.
Posted by Jane Housham at 12:19

Isn't this just THE most wonderful era to be alive? To be able to "travel" via Street View etc? I found myself looking at our local church and found out via google that it has an "interactive churchyard". An enquiring mind had me clicking on it and being able to view it arielly and view gravestones and locations from the air and even pinpoint specific graves!

Yes, it really is a most wonderful era and it doesn't do to take it for granted. I feel mealymouthed, now, for admitting that wooshing around on Street View made me feel a bit sick (although it does!). It's a great privilege to be able to peek into so many places in the world. I have various places I 'visit' -- future posts, I think.

Foundation is a wonderful course, isnt' it? I'd love to swap notes with you about it some time. In a way, I think it's almost better to do it at our age because you bring more knowledge to it, but, at the same time, I'd have given anything to be 18 and just starting out.
Jane