Pleased to be Blease

Yesterday one of the blogs I follow (H is for Home) had an interview with a designer called Jane Blease.
As I'm a Jane and Blease is one of our family names, I paid special attention. Perhaps we're related? I like Jane's cool designs and her use of some interesting materials, including recycled early plastics:
Jane's website showcases all her designs.
When I looked online for Jane, I immediately found a rash of other Bleases. I'd always thought the name was very unusual and, historically, in my immediate family, we always said it in a slightly funny voice. Now Bleases were coming at me from every angle and there seemed to be a preponderance of highly creative Bleases.
Gillian Blease is a wonderful illustrator who does a lot of work for the Guardian and masses of other publications. Then there was Matt Blease, another fantastic illustrator and designer:
I also found Joan Blease, a photographer, Jenna Blease, a dancer, Tracy Blease, a jewelry designer, and Adam Blease, an actor.
I wonder whether we are all distantly related? I got in touch with Jane, Gillian and Matt to ask them if I could reproduce some of their work. They all replied in a most friendly way and I felt very buoyed up by the idea of a great diaspora of creative Bleases.
My Mum (Audrey Carr) was also highly creative: 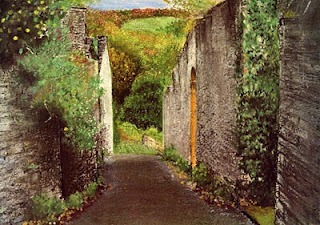 This is her painting of the top of Lombards Wynd in Richmond (Yorkshire). This was the way down to my old school near the river. 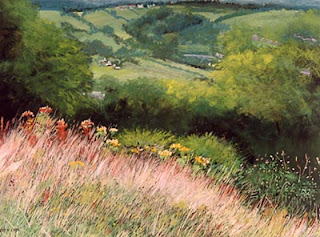 This is another of hers, a pastel, of the field just along from our old house in Richmond.
In her email to me, Gillian told me that the name Blease means a 'bright and shining light' -- the light that falls on hillsides between clouds. How beautiful! And I especially love that sort of light. Indeed there is a Blease Fell in the Lake District, on Blencathra:
In my online investigations, I also found alternative meanings for Blease. It's a flaming torch, a 'blaze'. And, fascinatingly, it's a corruption of Blaise, from St Blaise, derived from an old Roman family name indicating a defect of some kind, usually of speech or gait (from the Latin 'blaesus', meaning stammering, and/or the Greek 'blaisos', meaning bow-legged). St Blaise was martyred in Armenia in 316AD. He is the patron saint of wool carders because he was 'carded to death' -- my mind flinches from imagining that.
I don't actually know much about the Blease side of my family, going back. My grandmother had remarried by the time I was born. But I'm certainly looking on the name with renewed affection now. Long may the Bleases flourish!
Posted by Jane Housham at 07:05

Email ThisBlogThis!Share to TwitterShare to FacebookShare to Pinterest
Labels: Blease

Gosh, what an interesting post Jane. All these Blease's are very talented, and your Mum, WOW, what brilliant painting.

What an incredible post Jane. I love that six degrees of separation idea where one person knows another or is related in some way. This is kind of similar and there has to be something intriguing in so many talented people sharing such an uncommon surname. Equally fascinating is the origin of place names etc. Great stuff. Lesley

Amazing! I wonder whether we are all distantly related...

I hope you don't mind me asking but your mother Audrey, was her father called Thomas Edwin blease by any chance?

Hi Jane - you may remember me from school - your mother was an inspiration to me and improved my English skills no end.

Jane, I adored your Mum, an amazing and inspiring teacher.