Yesterday I was in London. I was invited to one of my oldest friends' birthday lunch (for a 'big' birthday) so, being me, thought I should make the most of the train fare and fit a couple of other things in as well. 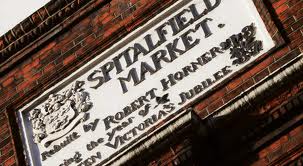 I was at Spitalfields Market by 9am as the stallholders were actually setting up. I think I need to go on a Thursday as that's the proper vintage day. Sundays seems to be more vintage clothing, handmade clothes and jewelry, and lovely foodstuffs. Well, I'm on a diet, so the foodstuffs were out. Part of the reason I'm on a diet is that lovely vintage things most usually seem to have been made for tiny prehistoric women. And I'm a bit funny about handmade things because I have a bad habit of thinking, 'Ooh, I could do that,' when I almost certainly couldn't, but it works very well as a discouragement to buy. So Spitalfields this time at least was a leetle bit of a disappointment.

But not to worry -- there was Plan B. I hotfooted it to Bloomsbury and the monthly vintage postcard fair, held in a room in a huge hostel-like hotel there. I've been once before, years ago, so knew what to expect.
It attracts, on the whole, a quite particular sort of enthusiast of the, shall we say, trainspotterish inclination. There must be literally a million postcards, if that's not too wild a guess, all sorted into shoeboxes and marked by topographical or subject markers.
I must say I enjoy going to places where a particular culture and language is observable, it brings out the amateur anthropologist in me. So it was fun earwigging on the conversations going on around me. There were many references to the 'topo's' and many boxes of 'glamour' cards for the discerning gentleman. One man came up to a stall while I was browsing and asked the stallholder whether he had 'anything nice' for him. I was riveted at once. The stallholder said, 'No, sorry mate, nothing nice today,' and then he said, 'Oh, but isn't it you who's interested in Warhol? Something's just come in that you might like'. Woo! I got even more vicariously excited then, if such a thing is existentially possible. The man bent down and hunted through a box on the floor. When he stood up he was holding a contemporary reproduction of a Warhol Marilyn, such as I own several of myself. I couldn't believe such a thing could possibly be considered 'nice' and, indeed, the chap was visibly disappointed and said, 'Oh, no thanks, I think I've already got that one'. 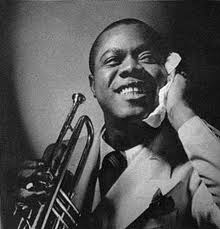 I saw someone else writing out a cheque for £600 for three photos of Louis Armstrong (and I don't know who else). I think they must have been signed. It was all fascinating.
And exhausting -- what with the strange smells coming from some of the customers (I'm not kidding), and the strain of staring down into the boxes for a couple of hours and the nervewracking etiquette that had to be observed. Seriously. It was like the Big-Enders and Little-Enders from Gulliver's Travels: some dealers stack their cards in front of the subject markers and some dealers stack their cards behind the markers. It was obviously very very important to observe this difference and never to replace cards you'd been looking at behind the markers of a Front-stacker or in front of the markers of a Behinder. Stern notices everywhere exhorted you to 'Put cards BEHIND markers' and so on.
Most of the postcards for sale were much older than the ones I normally buy. The stock is really fantastic and a treasure trove for serious collectors but perhaps not so good for people like me who have many not very serious enthusiasms. I didn't get very far with my requests for cards showing pylons, though I did happen upon some lovely oil derricks in a 'USA' bundle. There were great images of New York but not so many of Coney Island, another passion of mine. Festival of Britain, good, Butlins a little bit harder to come by. I think cards from the Sixties onwards may count as 'modern' and today I found out that there are separate 'modern postcard' fairs, which I would like to go to. 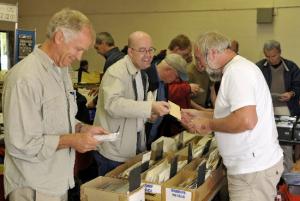 At the last stand I had time for before I had to go to the birthday lunch, I hit paydirt with a big stack of 'cars in towns 50s/60s' postcards. That's how they were categorised, but I love 1960s townscapes so was happily leafing through them and had pulled out one or two to buy. Then a chap came up to the stall and asked if they had any 1960s cards. 'She's got them,' was the answer. This man looked so like the comedian Charlie Higson that for a second I thought it was him -- 'Here, these are the ones I've already looked at,' I said and handed over half the stack. So we were both standing there, looking through strange images of Swindon and Birmingham and Preston. He shows me 'a nice one' he's found; I admire it and show him my one of Sparkbrook, Birmingham; he says he knows it well as his grandad used to live there; I find a nice one of Skegness, show it to him, and he says he's afraid I'm 'stripping out' all the cards he'd like to buy. Then he pays up and leaves the stall. I say to the stall lady, 'Oh, there goes a kindred spirit -- there can't be many people interested in old postcards of ring roads'. She is just agreeing with me when she sees him leaving the hall -- 'He's going! You should go after him! It might be destiny.' I laugh and go along with the joke, saying something like, 'Oh, I'll never meet another one like him...'. Then I have to leave too, so I'm just walking through the foyer of the hotel when I hear a voice shouting, 'Madam, excuse me, Madam!' So I look round and it's the stall lady who has run out after me; she's looking very excited. She cries, 'He's come back in, he's in there now! You could come back and claim him!' Okay, perhaps she didn't say 'claim him', maybe it was more like, 'find him', but this is actually what happened. So ... gentle reader ... I'm afraid I didn't turn round and 'claim him', for I am a married mother of two, but I just said, 'Ah well, thanks, but I've got to go...' and I think she was really disappointed. That's what happens when you try to make a living selling postcards.
And when I got outside, a huge wall of scaffolding had just collapsed onto a very posh Audi car right opposite the hotel and there was a lot of excitement and fire engines and so on (no one hurt, though), so obviously the earth had just moved ... or something.
Posted by Jane Housham at 18:18

Jane,
Shows you've still got what it takes girl but I notice you didn't actually say how old this chap was and what he looked like? Most important question was was he wearing an anorak and did you steal that view of Skegness out from under his nose? That's an eclectic range of topics of interest you have there. You've given me an idea for my next blog post! Lesley

What a fantastic account of your adventures yesterday morning. And you pulled at a vintage postcard fair, how random is that?!! (as my teenage son would say!).

I must remember the 'anything nice for me?' request - I might sidle up to people and ask 'anything nice?' Who knows what I might be offered!

I didn't pull!!! It was all in the stall lady's mind! The guy resented me for getting to the cards he liked first. Honestly, that's why it was so funny... Me, pull, as if...

Ignore those two, they are just downright jealous. Now, you can tell ME what REALLY happened ......... ;O)

I've just landed here from Lesley's Printed Material blog. I always like a good rummage through a postcard box if I see them in charity shops. They're great records of social history.