My last hunt for clues to the people in my old photos (from the collection of Henry Fitzgerald Reynolds) and their families focuses on Nancy Hamilton, seen above in the photo taken on Brean Down on 19 September 1931, when she was 23. Nancy's grandfather was Henry's uncle (he was one of Henry's mother's brothers) so I think that makes her his first cousin once removed.
Nancy was born on 30 June 1908 in Ulverstone, a small town on the north coast of Tasmania, Australia which had only really started to develop when the railway had arrived there less than twenty years previously.
The story of Nancy's family -- her grandfather in particular -- is incredibly interesting but it has already been thoroughly researched by one of Nancy's distant relatives and it wouldn't be right to claim any of her research as my own. Anyone researching the Hamiltons of Fintra online can't fail to find her research, which she is incredibly generous about sharing (I'm not sure if she'd want to be named online). Suffice it to say, in brief, that Nancy's grandfather was Richard Hamilton, born in Ireland in 1826. One interesting little side story that I've discovered myself concerns Richard's aunt Isabella (his mother's sister) who married a gentleman called Thomas Moores, a cheese and ham wholesaler in London with a house at 90 Farringdon Street. According to the 1841 census, Richard went to live with this aunt and uncle at Farringdon St, almost certainly in order to study. He would have been fifteen then so he probably stayed there for a few years until he completed his studies. They had no children of their own.
On Thursday 24 September 1846 a very curious thing happened at the house. It was still owned by the Moores but was unoccupied for a period (perhaps while they travelled abroad), so they had left it to the care of a couple, Mrs and Mrs Taylor. On this Thursday an aristocratic lady drew up outside the house and made inquiries there about a child that she had heard about. Mrs Taylor went off to fetch her daughter from Chandos St -- she did in fact have a three-year-old son (who was illegitimate). She sold the child to the lady for a down-payment of half a sovereign. Not long afterwards the woman came back and showed them the boy, who was now sleeping, stripped of his ragged clothes and 'now superbly clad in new clothes, and hat and feathers of the most tasteful and expensive kind'. The woman promised to return five days later to give the mother more money, up to a total of £5. This story was told in the Sunday Times but I don't know if there was any follow-up -- if there was I haven't found it.
So, back to Richard Hamilton, who joined the navy before marrying a girl from very close to his home at Fintra, Alicia Barrett. They went to live in South Africa where Richard wanted to be a farmer. Sadly Alicia died giving birth to her second daughter. Her two girls seem to have been sent back to Ireland to be brought up by their aunt Clara Barrett. Meanwhile Richard married for a second time, a woman who had been born in England but who had also emigrated to South Africa, named Margaret Mason. Richard had a chequered career in South Africa, trying his hand at a number of careers, including diamond-mining, but eventually returned to Ireland to try to raise money against his future inheritance from his mother (who had the Fintra estate in trust) in order to fund a new venture in America. While he was detained at Killybegs (where the Fintra estate was), it seems he may have fathered an illegitimate child with his dead wife's sister Clara -- a boy named Douglas. While his wife and children waited in South Africa for him to send for them, Richard set off to San Antonio, Texas without very much money, intending to work for a couple of years, learning the lie of the land, until he could realise his assets in Ireland. Sadly, he never made it to San Antonio as he died on the train journey from the East Coast, possibly of alcohol poisoning.
Nancy's father was Richard Robert Ernest Hamilton, the eldest of Richard's eight children with Margaret Mason. He was born in 1865, the same year as 'my' Henry. In 1881, according to the census, he was staying with his great-aunt Isabella Moores, just like his father before him. By now she was living alone (her husband Thomas had died in 1870) at 129 Holland Road, West London, with just the services of a cook and a housemaid. Richard was studying Law while he was there. Once qualified, he emigrated to Tasmania, settling in Ulverstone near Launceston, Tasmania's second town. 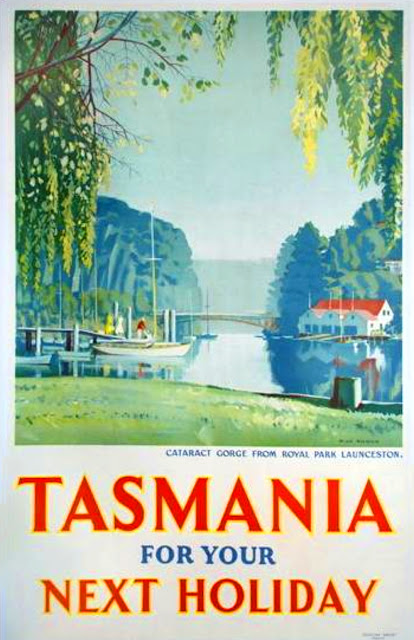 He married Margaret Phillips in November 1895 and I believe this was their house, in New Street: 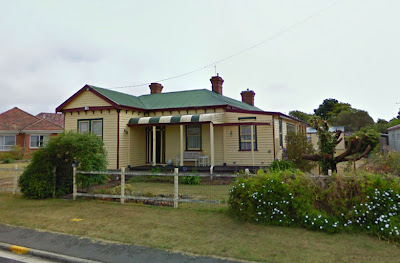 It doesn't look as grand as I expected but it's on quite a big plot of land. Richard was quite a key player in Ulverstone, carrying out business functions solidly for decades. He was an estate agent with an office in Ulverstone's main street, Reibey Street. He was also a government valuer, chairman of Ulverstone Football Club and secretary of the Leven Marine Board for just short of forty years. He didn't seem to do anything glamorous, just solid, money-making ventures and some property development.
He and Margaret had three daughters, Connie Loo (born 1897), Jessie Fintra (born 1902 -- I love that they named her after the ancestral home) and Nancy (born 1908). In 1904 Richard also fathered another child who was named Robert. Robert's mother was Rhoda King, who I believe was a servant in Richard's household. The illegitimate child was fostered out to a local woman, Mrs Greeney, who fostered a great many children both privately and for the state. She was a good woman. Robert was renamed Eric Reginald Greeney by his new guardian and later he changed his name again to Reg Greer. He was Germaine Greer's father and she wrote an excellent book about her search for the key to the mystery about him, Daddy We Hardly Knew You, published in 1990. She is an amazing genealogist. She's also 'my' Nancy's 'half-niece'!
Unlike some of her relatives, Nancy does not seem to have had an exceptional life. She evidently took part in lots of school activities and sporting events as she grew up. It's possible to track her through mentions in the local newspapers. For instance, on Thursday December 20th 1923 Nancy played Catherine Parr in a 'spooky sextet' of the wives of Henry VIII at the end-of-term speech day at Church Grammar School, Ulverstone. 'Each child in turn delivered a little speech very effectively'. As part of the same event Nancy played a Huguenot, the Comte de Caerhout, in the closing entertainment, 'The Trap', about the Huguenot Massacre on St Bartholomew's Eve. Her character-acting was 'outstanding', the paper said. Nancy won prizes for arithmetic, sewing and popularity (the latter voted for by the other pupils). She played a lot of tennis.
Nancy was soon to leave to go to finishing school. When she came back to Ulverstone she threw herself into the local social scene. She was named Belle of the Ball at more than one of the many dances and balls that took place. The papers lovingly described what seem like all the ladies' outfits so that we know that Nancy wore 'black georgette with inlets of lace' on one occasion and 'satin-trimmed net' on another.
At the end of March 1931 Nancy travelled to England on the SS Mongolia, disembarking in London on 3 April 1931.
Almost all we know of her adventures in the old country is that when she first arrived she stayed at St Christophers Buildings, Wigmore St and that she visited her cousin Henry and went for a walk by the sea near Weston-super-Mare. That must have been towards the end of her stay as two weeks later she had embarked on the SS Strathnaver, a brand-new ship making her maiden voyage to Australia. The ship sailed on 2 October 1931. Here's the page from the passenger list showing Nancy's name: 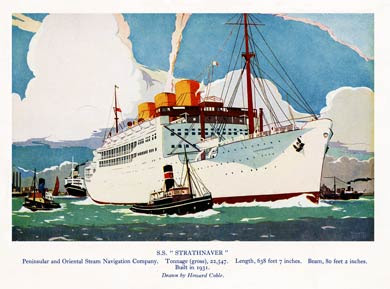 The Burnie Advocate noted her safe return on 18 November 1931:
Of course it was expected that Nancy would marry and she duly did. She married Henry Charles Room, scion of a local family. I don't have a photo of Henry but there's one of some of his family, taken in the 1910s, when Henry must have been a child:
I don't know the date of their wedding, but it must have been before 1935 as on Wednesday 6 November 1935 the local paper noted the following:

A few years later there was a mention of a visit home from the mainland with a little girl called Margaret. Trawling through the Australian census records it's possible to glimpse the family, moving from home to new home, some of them back in Tasmania. Henry was a bank clerk. I've only really found one interesting trace of him which is that on Friday 8 January 1954 Henry knocked over a cyclist (17-year-old Arthur Pyers) in his car on the street where their current residence was, Goldie St in Wynyard, a little town along the coast from Ulverstone. The poor boy suffered 'severe abrasions to the head' but there doesn't seem to have been any sort of court case.
Apart from that, Henry is elusive. I haven't found the date when he died but Nancy seems to have outlived him by a number of years as she appears on her own in the censuses for a long time, right up until 1980 when she was living in a small house in Auburn Road, Hawthorn, a suburb of Melbourne. Again, I haven't found the date of her death.
Nancy wasn't famous or extraordinary, but I have hugely enjoyed hunting down all the little mentions of her that I've been able to find, in an effort to bring her to life. This post concludes all the stories that I've been able to squeeze out of those photos found in a flea market in Brighton. Well, almost all of them, but those lesser tales may have to wait.

I desperately need a family tree for these people! Or I need to start back at the beginning and draw one for myself.

That piece in the paper about the poor chap with head abrasions - how miraculous that you have unearthed that incident. What happened to him I wonder.

I visited Tasmania a few years ago and it reminded me very much of England. However, there was not a single mention in the East London Advertiser when I arrived home.

me again - Richard Hamilton (who died on the train, was also related to Louisa Hamilton, who married Captain Cator who was father to the Texas Cators, and so on and so forth ... see how they're all intertwined!! I think but have not confirmed it, Richard was Louisa's brother, and was on his way to catch up with the Texas Cators ... I've really enjoyed your blog by the way and just discovered today

And I am a descendent of Margaret Mason and Richard Hamilton through Margaret Ruth Hamilton born 1872 in Natal. Richard Hamilton is my great great Grandfather. I wonder if you used my daughere's research into Richard Hamilton. she is Shannon Adams and added it to Ancestry. Regards Anne Chappel, Australia. chappels@bigpond.net.au