A moment of passing time captured 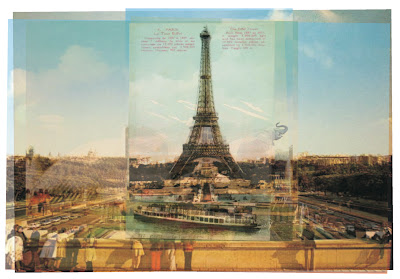 When I was trawling through images of the Eiffel Tower recently for my attempt at a digital print,
I noticed that two of the postcards I'd got were almost identical but not quite: 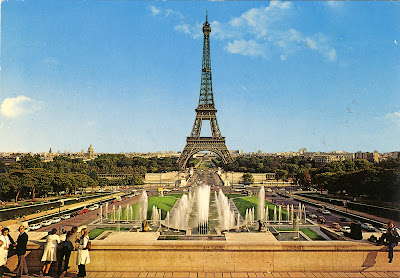 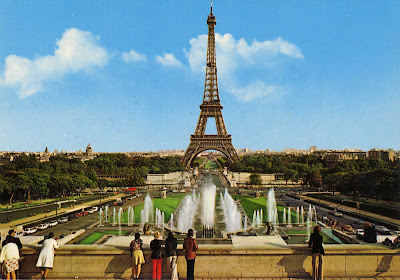 I bought one from Spain and one from Portugal and neither of them had been used, so they must have been bought in the 1970s, from the look of the clothes, by foreign visitors to the city, kept pristine for decades, only to end up for sale online and bought by me. 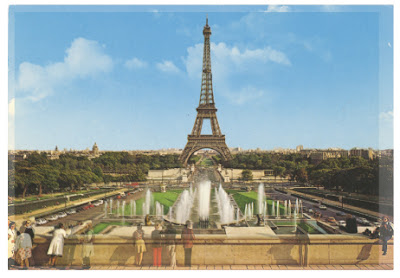 It's not an earth-shattering event, these two shots taken one after another one bright day in Paris. Their serial numbers on the back are 104 and 105. I just very much like the fact that if you lay one on top of the other with some transparency, you can merge the two moments into one. Only the woman in the white mac on the left and the woman on the far right sitting on the wall are constants, The other people have moved on. It would be lovely to find other images from the same sequence of shots, but I doubt whether the postcard company needed more than two near-identical shots of the Eiffel Tower in a single period. But the two postcards taken together seem more than the sum of their parts.
Posted by Jane Housham at 12:07

I really like these overlapping moments, the way the clouds have moved on, the obvious repitition of the sequence of spurting fountains, the stability of the woman in the white mac, all against the solidity of the tower itself, and the coincidence of finding these two postcards. Precious.

Only you would find 2 near identical postcards like this! They look quite ghostly when overlayed, great effect.

x
ps I've got some catching up to do on your blog - I'll be back later!