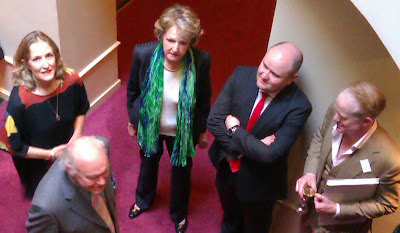 To the London Palladium, my dears, yesterday morning, for a glamorous event, the Theatre Book Prize 2013. Our lovely author, Margaret Leask (above left, with prize judges Penelope Keith and Henry Hitchings, winner Ian Kelly and, in front, Timothy West), was shortlisted for her biography of Edwardian actress and proto-feminist Lena Ashwell. 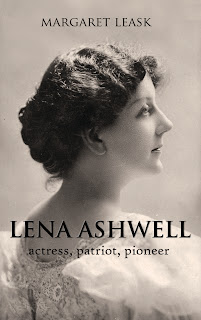 We were thrilled to hear Penelope Keith call Margaret's book 'a real page-turner' in her presentation before the winner was announced. Sadly, it was not our book, but Ian Kelly's biography of Samuel Foote, a one-legged comic actor in Georgian London, that won. Many congratulations to him.
Everywhere I go these days I'm dogged by Fenella Fielding! 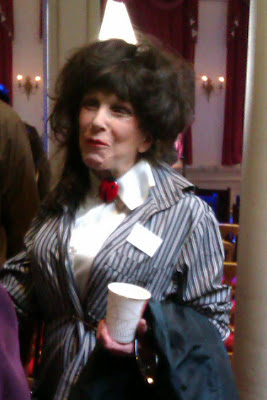 There were lots of other wonderfully mature actors present, all ever so slightly 'on'. Even my mobile phone provoked straightenings of the spine and a proud lifting of the chin in several. 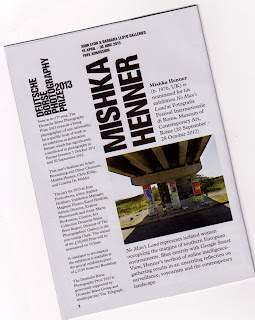 Afterwards I nipped along Oxford St to see the Deutsche Borse show at the Photographers Gallery. I found this very exciting and inspiring because, of the four shortlisted photographers, only one, Chris Killip, takes conventional photographs. While these were excellent (of places that I know from my North-East childhood), it was the other three who really gave me food for thought. Adam Broomberg and Oliver Chanarin had 'invaded' a book by Bertold Brecht from 1955, gluing their own found imagery (which was closely linked to the originals) over Brecht's photos to profoundly shift the impact of the text. It was a really interesting 'altered book'. Cristina de Middel mixed fact and fiction in a very funny and wry project on Zambia's ill-fated bid to join the space race in 1964.
My favourite of the four shortlisted photographers was Mishka Henner who, like me, is obsessed with Google Street View and has used it to track down sad glimpses of prostitutes in Italy standing by lonely roadsides. It was amazing to see the phrase 'shot entirely with Google Street View' in the brochure accompanying the show -- almost suggesting that Street View is some sort of camera that allows viewers agency. It seems to legitimise the use of Street View shots (as did Jon Rafman's show at the Saatchi Gallery recently, The Nine Eyes of Google Street View, which I also enjoyed) and makes me feel much more confident about my own use of Street View. 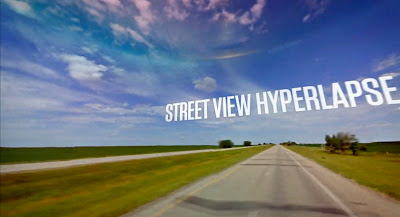 But absolutely the BEST Street-View-based art I've seen recently is this video by Teehan & Lax Labs. Please watch it -- I just love it. This is my dream! To travel the world through the portal of Google Street View and this film seems to bring it closer to reality.

Back soon with more on my old-photograph family...
Posted by Jane Housham at 12:04

The film was dizzying.

Oooh, I could do with a bit of glamour. Life is terribly dull at the moment.