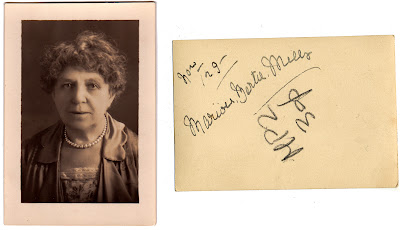 This rather sad-looking woman is Marion Bertie Mills. The photo is another of those I found in Brighton, part of the collection of Henry Fitzgerald Reynolds, who you'll hopefully remember from my earlier post. Marion was Henry's cousin, the daughter of his mother Matilda's sister Louisa Hamilton. Louisa Hamilton was born in 1832, the fifth child out of ten born to James and Ann Hamilton of Fintra House, Donegal. She married Sir John Bertie Cator in 1849 when she was only 17 and he was 29. They made their home at the Grange in Swanland near Hull.

Sir John came from near Doncaster in Yorkshire and was a captain in the British Navy. He had already fought in the Chinese Opium wars and only a year or so after his marriage to Louisa John captained a steam tender, Intrepid, one of four ships that set out in search of the doomed expedition of Sir John Franklin to find the Northwest Passage, one of the most famous disasters in exploration history. At the Scott Polar Research Institute there are two sketches made by John whilst on the journey. You can see them by clicking on the link (can't reproduce them because of copyright restrictions) -- one shows his ship breaking through the ice to join the other ships in Melville Bay on August 3rd 1850 -- you can see the steam engine toiling away.
Louisa, only 18, had had two children by the time her husband's expedition returned (one must have been born before he left!). These, the first of the seven children she would eventually have, were Arthur John Locke Cator and James Hamilton Cator. Marion, above, was the fifth child, born in 1857.She was, unusually, given her father's middle name of Bertie -- John and Louisa's youngest child, a son, would be christened Bertie Osbaldeston when he was born in 1863 (we'll be hearing more of Bertie O Cator later on...). 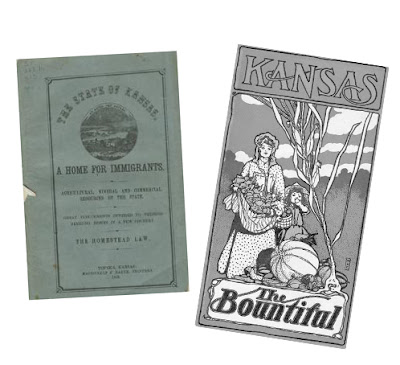 By the time his two oldest sons were reaching their majority, Sir John was focussing on their future careers and taking steps to try to ensure they would be successful in life. Ironically, in view of what they went on to do, he felt that a career in the Navy would be too dangerous and he had them trained in engineering and draftsmanship. He wrote to the American consul in London to ask about opportunities for young men in the less settled parts of the United States and in 1871, after hearing glowing reports about Kansas, he sent James and Bob there to strike it rich as farmers. Kansas had only joined the Union in 1861 and had been caught up in the American Civil War. An indication of how wild it was when the young men arrived there is that in 1871 Wild Bill Hickok was the mayor of Abilene, Kansas.
Arthur and James couldn't settle to farming, however, and I've read that they were 'scorned' by the other Kansas frontiersman (perhaps they spoke with an upper-class British accent that made people laugh). However, they managed to transform themselves into men of the Wild West, becoming known as Jim and Bob Cator. They turned their hand to hunting buffalo, a highly profitable trade at the time (before the buffalo were hunted almost to extinction). WIth their first earnings they bought a wagon with mules and horses and set to hunting with a vengeance. At one point they employed seven skinners. 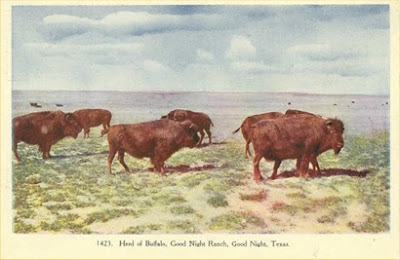 At a certain point, when the price of buffalo hides dropped, the brothers turned to killing wolves and coyotes, but soon returned to hunting buffalo. In the late autumn of 1873 Jim and Bob moved into the Texas Panhandle where the animals were still abundant. The winter, when it came, was severe, and the boys had to hunker down and wait it out. They camped in North Palo Duro Creek and made themselves a crude dugout of branches and hides. 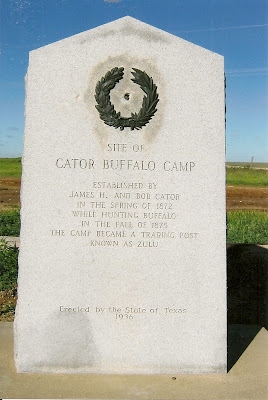 Today a waymarker records the place where the Cators made their camp (the dates on the stone conflict with other accounts I've read..). From a longer shot, you can see that the landscape is still pretty empty: 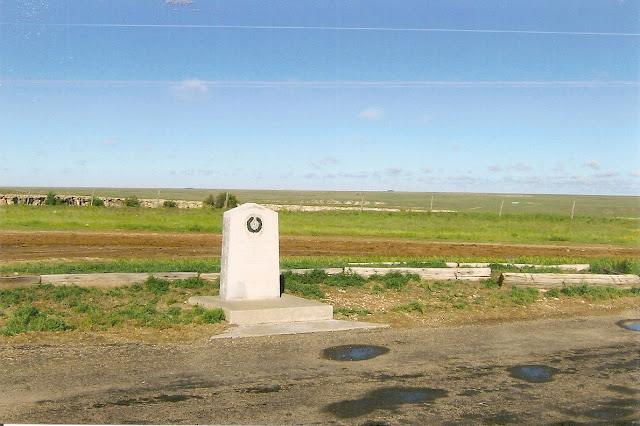 The Cators are famous in Texas as some of the earliest 'Anglo' settlers there. There are lots of accounts of how they first established themselves, many with conflicting dates, perhaps reflecting the lack of documentary evidence. They carried on hunting buffalo for several years, until the dwindling numbers of animals prompted them to try their hand at ranching. They had maintained their dugout in the Creek as a base all this time and now they herded the stock they had bought from a ranch about 100 miles to the south, in Potter County. Their dugout perhaps looked something like this one, a far cry from the Grange, Swanland: 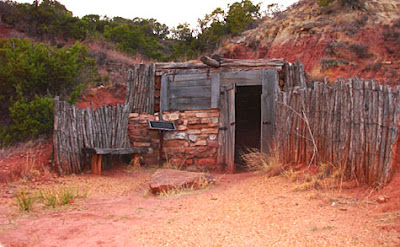 By 1877 Jim and Bob were well-established in Hansford County and they built themselves a far superior home which they named Zulu Stockade (a few miles from their first place. The name was a nod to contemporary British military efforts in Africa and their sense that Texas was just as wild as Africa). By now there was a regular route through their part of Texas, from Dodge City, Kansas, to Fort Bascom in New Mexico. The Cators turned their hand to supplying goods to passing traffic and the stockade became a store. 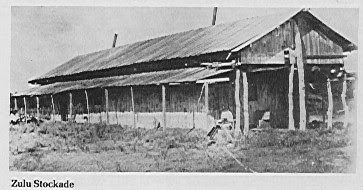 In 1880 they also got a license to run a post office there, with Bob as postmaster. Another waymarker records where the Zulu Stockade once stood: 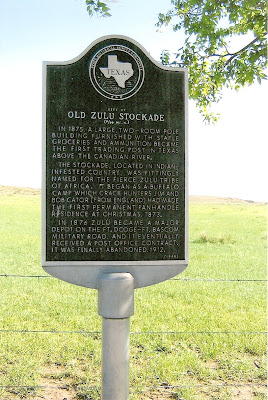 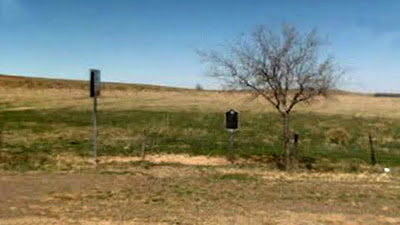 As you can see from the Google Street View picture above, nothing remains of the Stockade today. It was abandoned in 1912 -- the coming of the railways took their business away. But the Cators were well and truly established in Hansford County, Texas and their success tempted other members of the family to come out from England to join them.
Their sister Clara and much younger brother Bertie O came out to join them in 1879. Clara would have been 24 and Bertie only 16. Another young woman came with them called Jennie Ludlow and in 1882 she married Bob. Clara and Jennie were among the first white women to settle in the Panhandle. They tended the store. Jim Cator had been back to Hull in 1879 (perhaps his siblings then travelled back with him to America) and had met a girl called Edith Land. But it wasn't until 1887 that Edith came out to the States (travelling with her brother Arthur). Jim went to meet her in Dodge City, Kansas, where they got married. By this time Bob and Jennie had moved away to Oregon after a particularly hard winter in 1886 had nearly wiped out their herd of cattle. But Clara had married a local schoolteacher, Clayton McCrea (known as 'Clate'), and they took over the running of the stockade. The last sibling apart from Marion, Leslie, came out to Texas not long after the others, bringing his bride Bessie Donelson with him. Here's an amazing picture of Jim and Bertie Cator in their cowboy prime: 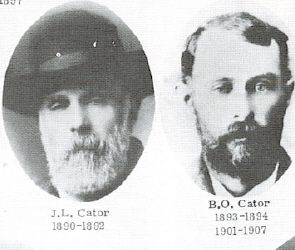 As Texas was progressively settled and developed, the Cator family were right in there at the heart of it. The town of Hansford, close to their ranch, was laid out in 1887. Both Jim and Leslie Cator served as county judges and Jim's brother-in-law Arthur Land was the first county treasurer. Bert established a timber and grain company in Hansford and twice served as county sheriff. Jim and Clate were the first farmers to introduce alfalfa as a crop in their county and Jim also set up the first local bank, in 1907. Jim died in 1927 whilst Edith lived on in the house he had built for her until 1950. The town of Hansford was overtaken by another nearby settlement, Spearman, which was on the railway. Hansford became a ghost town but many of the original Cator settlers are buried in the cemetery there.
Bert O's son Marshall was born in 1902 and lived to be just short of 100. A statue of Marshall was erected in 2000 at a museum in Canyon, Texas: 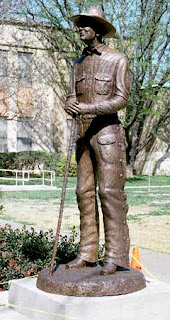 When Marshall died in January 2002 he too was buried in Hansford cemetery.
It seems that Marion was the only Cator sibling not to emigrate to Texas. I wonder what her feelings were about the steady disappearance of her family across the Atlantic and whether she was tempted to follow them? However, I think perhaps Marion did go to America after all. In 1883 she married a local gentleman in Hull, Arthur Richmond Mills, but Arthur was, like Marion's father, a man of the seas, and seems to have spent his professional life as the captain of ships sailing to and from New York. It seems he was naturalised as an American citizen and they may have had a home in New York. I have one other photo of Marion from my Brighton finds. She's standing with Arthur and the shot was taken by Henry, her cousin, in Southampton in 1925 -- it would make sense that they were in Southampton, if they had just come in from an Atlantic crossing: 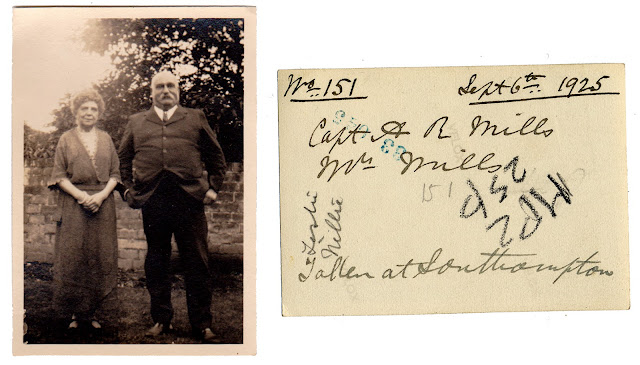 What a paunch on Captain Mills! Somehow I don't feel Marion can have had much say in the direction her life took after she married him (pure speculation, of course). She does look somewhat meek in her photos. It seems amazing that all her brothers and her sister went off to the Wild West from Hull.

The next 'chapter' of the investigation will focus on Henry's Reynolds ancestors...

After I've read yet another comfort crime novel, I dream about becoming a private eye. When I do, I', going to offer you a job as your investigative skills seem second to none.

Such a strange journey these people had, like something from an Annie Proulx novel.

very interesting read - but you left out another brother, one who didn't go to Texas but followed in his father's footsteps and was a merchant seaman going back and forth from India to England and other ports as well. He was Charles Frederick Cator (3rd son after James Hamilton) born 1854. Charles married Emily Elizabeth Swain in India, where they were based - together they had 6 children, losing one son at the age of 2, the other remaining son in WW1 (unmarried and "without issue" as they say) leaving 4 daughters. Charles died in Calcutta, India 1897

Thanks very much for all your comments. I don't think I can reply to you directly as you're not registered on Blogger. Do you have a family connection to the Hamiltons?

So very interesting! So glad I found you!