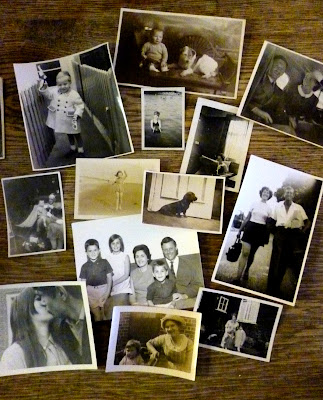 Recently I signed up for a print swap organised by Lesley. I put myself in for this in much the same way that Jaz volunteered to be Project Manager in the first episode of the new series of The Apprentice, ie without thinking first -- and we all know what happened to her in the boardroom...
There was quite a good reason why it might not have been possible for me to do the print swap. I currently have nowhere to do art and no art materials to do it with. You remember my mad little office?
I also had a table in our sun room to do art on but the roof leaked onto it and things kept getting spoiled. Something had to give so we have bitten the bullet and are having a posh hut built in the garden. That meant my office had to be emptied:
Then this happened to it:
Then we were boarded in -- no light for us for a few months (or a lot less, anyway). We've become hobbits. 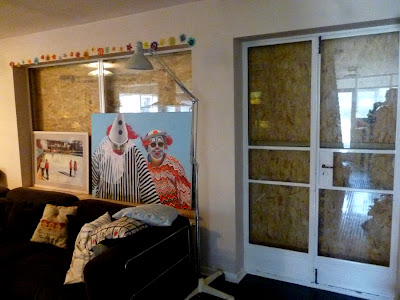 And beyond the chipboard this has been going on: 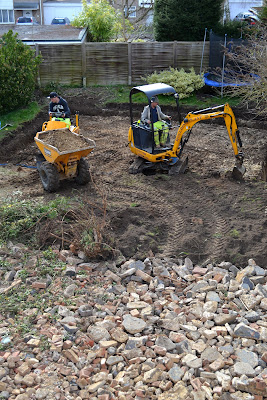 So no space for me to be creative and all the stuff for being creative with is in storage. Hmm. All I've got at the moment is my computer (perched at the bottom of the stairs -- can't complain, though) with a lot of images saved on it and a paper bag containing the old photos I've been buying lately. You can see some of them at the top of this post. I absolutely love these old images and my first (and only) thought was to do something with one or some of them. I suppose I could have done just a really high-quality scan of one of them and printed it nicely on some good paper. Maybe this one: 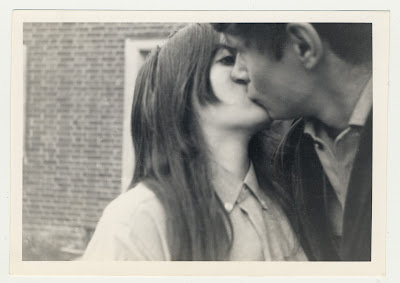 Or I could alter the colour: 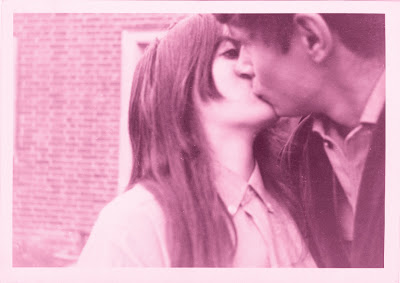 Or I could add some text: 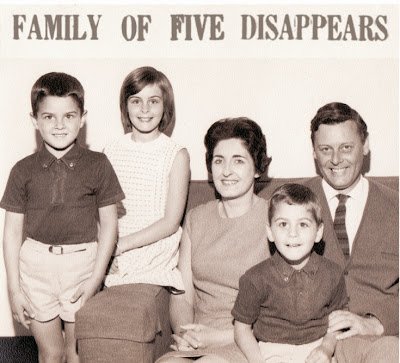 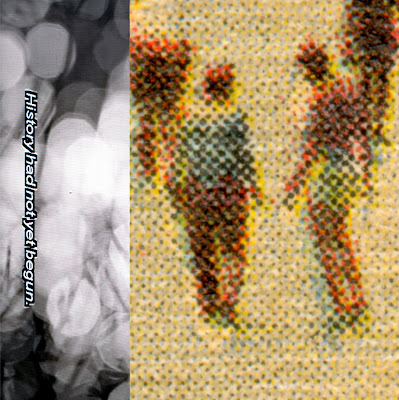 By this time I was getting a bit frustrated with the old photos, lovely though they are, so the above idea combines two other sorts of images that I really like -- images captured from television and blown-up details from old postcards. They don't work very well together, though -- or not here. I decided to focus on the old postcards. I've quite often isolated little scenes in very animated postcard views where something seems to have been unintentionally captured by the photographer. I've blogged about it before here. I started off by isolating this woman from a much busier scene -- I tried various colourways: 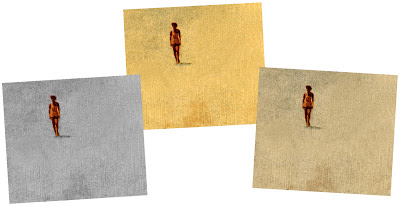 The woman comes from this postcard, below, and I love the way she seems to be all alone in the scene in spite of the other people around her: 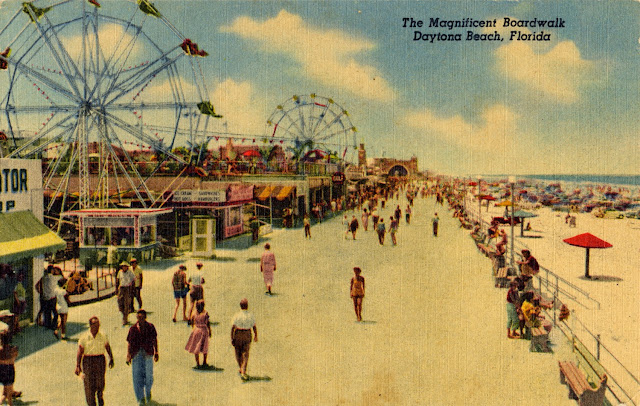 But the idea was going nowhere. So I switched to a different postcard: 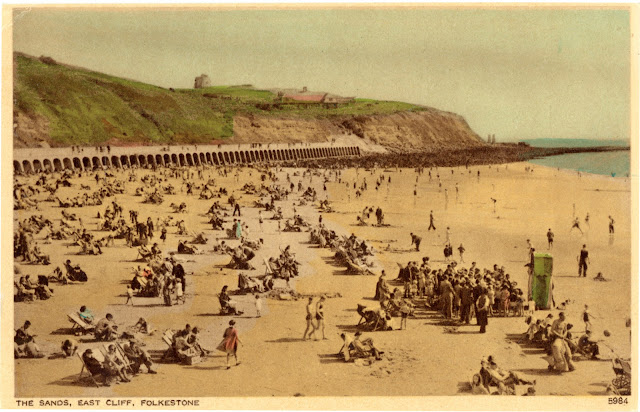 There's so much going on in this one, but one area in particular caught my eye: 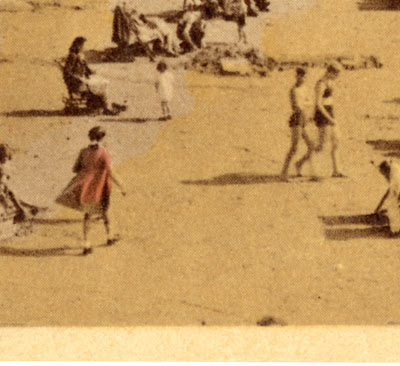 What is this young girl doing striding along the beach in a red coat? I like the two tall boys as well. My first instinct was to isolate them 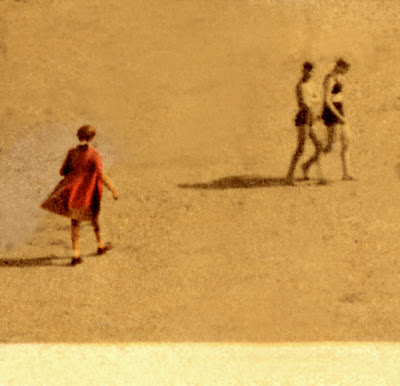 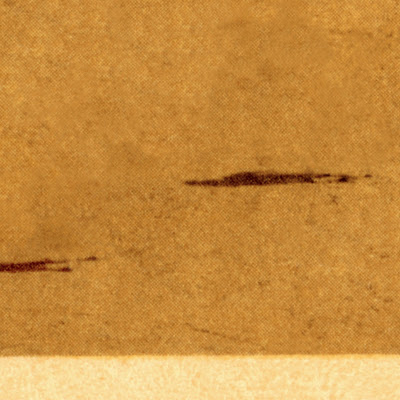 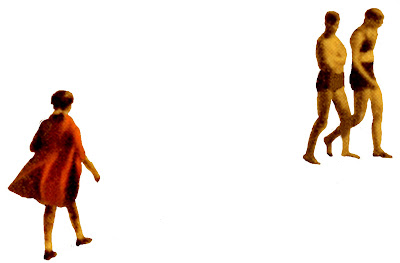 It was suprisingly difficult to cut out the figures as they blended into the background so much and they ended up looking fat somehow. Then printing on two different printers was a nightmare! So difficult to get the feet and the shadows to line up exactly. But I quite liked the test prints I did. I also added some text... 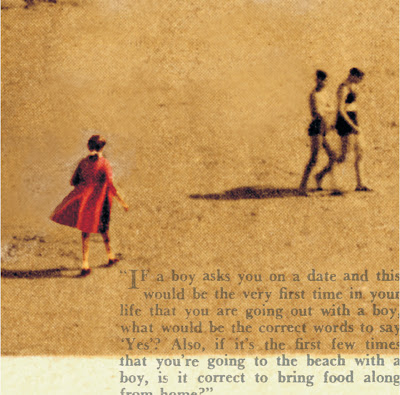 This was going to be my print. The main element of interest was the contrast of the shiny-surfaced figures and the matte background. Here's a picture to show that: 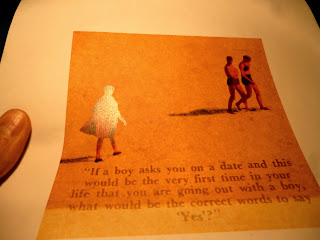 I liked it and it seemed to make doing a digital print have some raison d'etre -- you couldn't easily get this effect any other way.
The final step of the process was to buy some nice thick paper and make my limited edition of ten prints. Unfortunately, this is where the whole thing fell down, because on the posh paper the laserjet didn't print shiny. There was barely any difference between the two surfaces -- not enough to make it the key 'selling point' of a print. At that point I decided to start again almost from scratch. I tried to think of another characteristic of digital images that would make a print special. I decided to focus on variable transparency. I collected various sets of images and overlaid them with varying degrees of transparency. In fact the set I tried first turned out to be the one I liked best but I also tried:
You need a fixed point that can anchor all the different images so that it appears at 'full strength' whilst all the other elements are more gauzy. In the end, this is the print I went with: 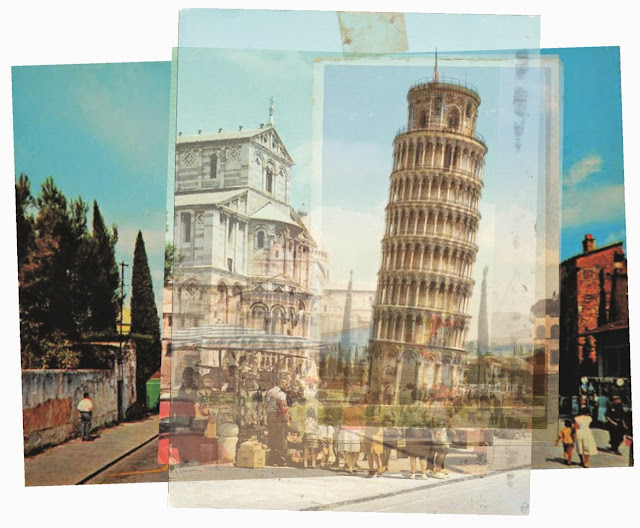 The picture makes itself, in a sense, because the position of each layer is fixed around the anchor point. You can alter the order of the layers and make some of them less or more see-through but the overall shape can't change. I like the Pisa one because it has the most interesting overall shape and I like the strong splashes of colour at either side. The choice of subject is not so much because I have any strong love of the Leaning Tower of Pisa but because it's an iconic image that has been reproduced countless times in postcards more or less since the advent of photography and from many different standpoints. A combination of eight of these images, all with the Tower as a common element, makes for an intriguing print and fulfils my main criterion of making an end-product for the swap that could only have been done with the tools available to me.
I must thank Lesley for coming up with the idea of the swap because I've really enjoyed doing my bit for it. I haven't been doing much art for a while, mainly due to my new obsession with genealogy -- this project got me thinking visually again and was an interesting exercise in process -- each step was taken in response to some lack in the previous stage until I arrived at something I liked.
Posted by Jane Housham at 14:01

The end result is fabulous and I love my print. Now I've got to be brave and post mine!

I thoroughly enjoyed reading your thought processes as you worked through to your final design. (The text about going on a first date was a wonderful touch). I was interested to read that the different printers gave a different finish..........

Reading how you worked through ideas to the final print has made it even more wonderful to have. I envy you your skill with whatever programmes you're using. I love layering images and isolating things but would never have thought of using old photos or postcards in this way. I think I will be looking at postcards with a new eye from here on in. Like Gina, I love the finished result and can't wait to see your 'studio' when it is done. Can only drool with envy....