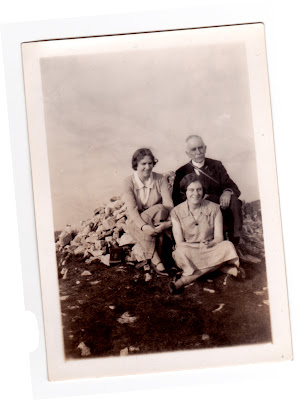 Here's another of the photos I dug out of the box in Snooper's Paradise in Brighton (Here's my earlier post on this if you're interested). This is the back of it: 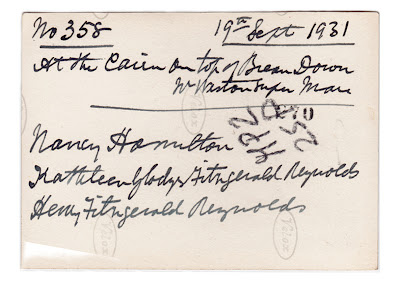 What a wealth of information on the back of a small photo! The person who wrote it was evidently  extremely organised as they have numbered it as part of what I assume must be their entire collection -- and yet even that diligence has not been enough to stave off the forces of chaos, for it ended up in disarray in a flea market.
It says:

One can only wonder at the sort of mind that writes full names out on the backs of their photographs.

Since I wrote the above, a couple of months have passed. I continued researching the people in the photo and got completely caught up in their family history. It turns out that Henry Fitzgerald Reynolds, the gentleman who appears in the photo and who also wrote all the information on the back was himself an extremely keen genealogist who carried out the most rigorous research into various families in Ireland (mostly linked to his wife's family, the Hamiltons) and, through the work that he published in the early twentieth century, has actually helped me to research his family all over again.

The people in this first photo are Henry, born 1865, his only child Kathleen, born 1912, and his great-niece from his wife's side of the family, Nancy Hamilton, born 1908. His wife Gladys must have been behind the camera, I think. She was born in 1882. 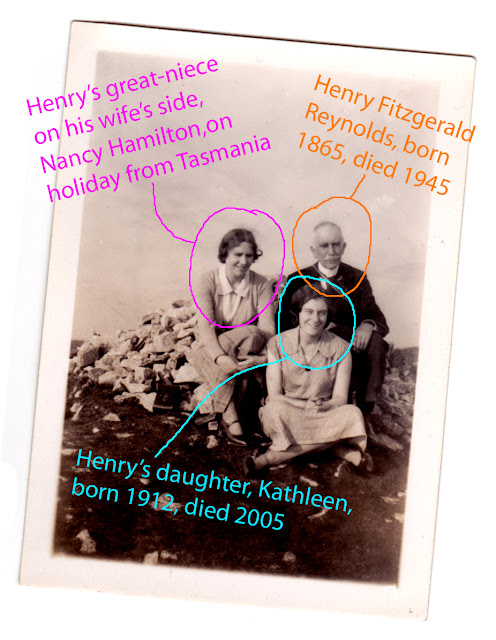 I've done a lot of research into Nancy, although I haven't really been able to find out very much about her (in terms of solid facts). I thought I had found an autobiographical memoir that she'd written (I was so excited when I thought I'd come across that) and I arranged to borrow it from the National Library of Australia. I thought it would fill in all the missing details of Nancy's life but, sadly, when it came, it was by a different Nancy Hamilton with no connection to 'my' one. I'm going to save Nancy's 'story' for a subsequent post.
I do feel as though I've started to 'own' the Hamilton and Reynolds families, purely as a result of focusing so intently on them, but in fact there are lots of people researching them, many of whom actually have family links to them. My only links are through these few photos I now own (22 in all -- I went back to Brighton and found more, as you may recall).
I've now followed up so many different branches of the family that I scarcely know where to begin to write it all down. There are stories of pioneering in America, of diamond-hunting in South Africa, of crime (though not committed by an actual member of the family but one of their employees), of illegitimacy, celebrity and betrayal. This family is so much more compelling than my own! All this to come in future posts, but for now let's start with that first photo taken at Brean Down near Weston-super-Mare, which you can see above as it is today.
When the photo was taken, in 1931, Henry and Gladys were living in Cardiff at 59 Westville Road (of which more in a moment). But they seem to have taken their holiday in Weston-super-Mare that year. Here's another photo of them from a couple of weeks earlier, with their friend Peggy (Margaret) Freeth:
There's another photo of the three women, taken on the same day. They're taking the ferry across the River Axe at Uphill, which is on the way to Brean Down from Weston-super-Mare, so it was probably taken earlier in the day (or conversely on the way home):

I love the way Fred Patch the boatman is the main subject of the photo (who knows whether this was by design, perhaps not). Even though the image is out of focus I love it.
The next day, the holidaymakers went to Cheddar Gorge. Here are Henry and Gladys standing in front of the waterfall there. Perhaps they asked Peggy to take the photo for them: 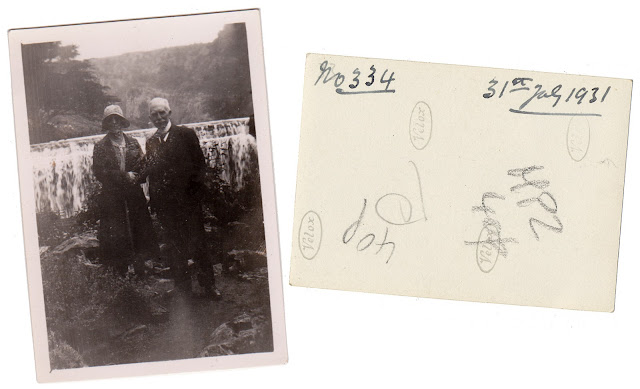 This is what it looks like today:
Henry was an engineer and analytical chemist. Beyond that, I don't know very much about his career. I'll go back through his family history in a later post, but for now, this is the house at 59 Westville Road, Cardiff, where he and Gladys were living in 1931:
Here are Henry and Gladys looking rather happy, on what is probably the back doorstep: 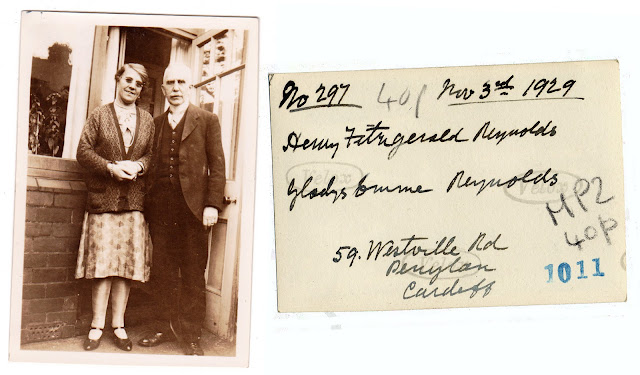 Here's another of Henry's photos taken there, in the back garden: 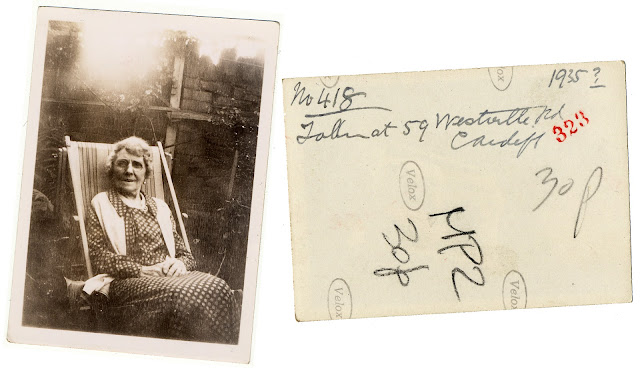 I'm afraid I haven't been able to identify the lady. It isn't Henry's mother or mother-in-law. I can't decipher the name on the back of the photo -- can you?

Henry and Gladys must have been very fond of Weston-super-Mare because they moved there a few years later, to 4 Malvern Road. This is the house today, another lovely, solid late-Victorian house:
This is Henry's photo of the rear garden there: 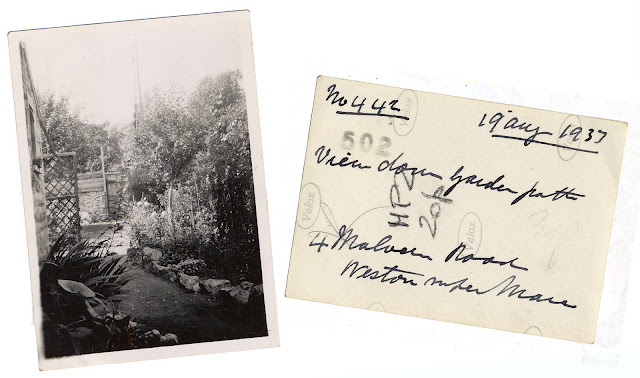 I really should stop for now, although I've hardly scratched the surface. To finish, a photo of Henry's daughter Kathleen in 1938 when she would have been 26. She is in the garden of a house called Park View in Minchinhampton. I like to think that she had perhaps got married, or at least was living happily there.I don't know anything further about Kathleen except that in later life she lived in Barnet, Hertfordshire and supported wildlife causes. She looks like a jolly good sort, don't you think? 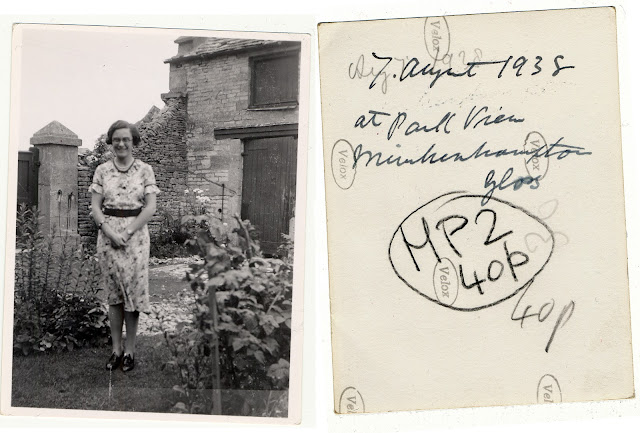 Here are her parents, who were visiting her, looking very relaxed in Kathleen's garden in Minchinhampton, although Henry is, as ever, in his Edwardian 'uniform' of three-piece suit and stiff collar and tie: 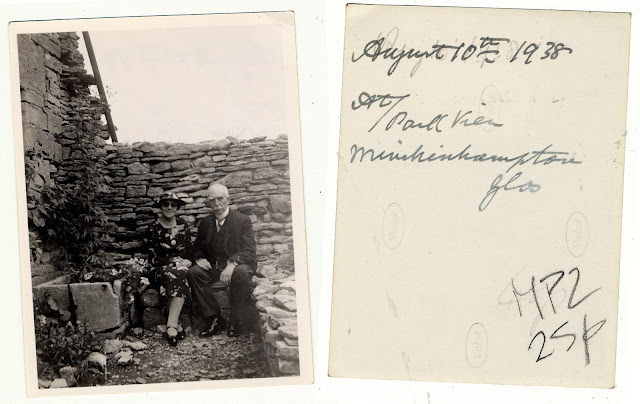 Come back soon for lots more about this family's forebears...
Posted by Jane Housham at 14:17

Absolutely fascinating! Can't wait for the next instalment.

WOW!
Jane, it is absolutely incredible what you all find out of a box of foreign (am I right) photos. Not only that the pics are just wonderful, but the story is totally incredible - what a family!
I really admire what you've already found out. I think this is a story to be told, you should write a book of that. If you don't get to know all facts, it doesn't mind you can mix up reality and fiction to a wonderful and fascinating family story! Go, Jane, go!!
Barbara

I'm intrigued by the indecipherable name. Could it be a T or L? I even looked up Welsh names beginning with those letters.

You've hooked us too.