Trying to be creative

Lesley often has great videos on her blog, and her 28 December post had a great one: 29 Ways to Stay Creative.  I like the style of this animated graphic and I like the 29 commands as well. But I found myself questioning whether I am likely to carry out these instructions for real. As we're just about to launch a book at work about the benefits of 'Doing Something Different', I feel pretty well informed about the benefits of changing what you do, but how hard is it to go against ingrained habits? Also, what if you already follow the instruction anyway?
Let's take those 29 Ways in turn 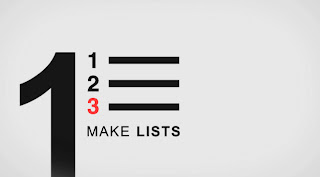 1. Make lists.
Yes, well, I wouldn't be functional without lists. I'm increasingly reliant on lists and I wouldn't be surprised if by the middle of 2012 my daily 'to do' list goes something like:
I love looking back at old lists as they often reveal quite startling levels of self-delusion, as with this list, written on one of those days when doing one's 9-5 job until one is 70 (or whatever the retirement age will be in a few years' time) seems unbearable: 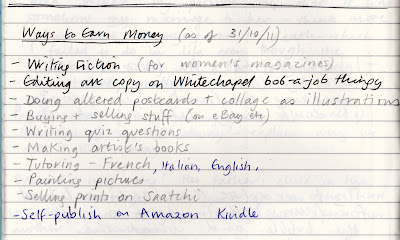 This list is embarrassing but not as embarrassing as the others I've just been looking at (I tend to make lists in notebooks so they are kept for all time) and which have made me want to go outside right away and throw myself under a bus (one advantage of living on a main road). The main problem is that so many items are never cleared from the list but merely transferred from the old list to the new list. Some items on my 'things to achieve in 2012' list have been on such lists for years, decades even.
In fact many of my lists have persisted since childhood. Here's my list of 'holiday ideas' from about 1974 (aged 12) -- I wouldn't be averse to doing most of them now. Is that bad?

2. Carry a notebook everywhere.
Absolutely. I am never without a notebook. Usually two or three. The trouble is I now have about 36 notebooks full of a mishmash of work stuff, 'creative' stuff, shopping lists, plans, curtain measurements, and so on, not by any means all dated, so extracting the good stuff is quite difficult. A sample page, hopefully not too embarrassing -- these are opening lines for novels, written very quickly for a writing workshop... 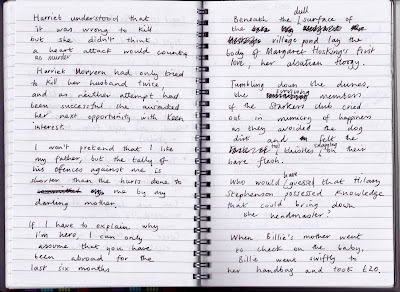 3. Try free writing.
Oh dear, oh dear. This one is very dodgy. I've tried it in the past and it's completely weird. Not sure I should go public with this stuff... 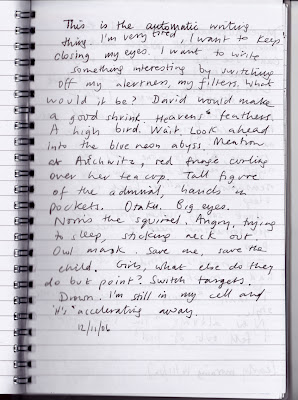 I'm not convinced that anything very inspiring comes out of automatic writing, but when I tried it (a few times), I quite enjoyed the sense that it was possible to switch off one's normal inner monitor. So perhaps it would be possible to start with an actual idea and then let the words flow uncensored. But without an idea (as above), it will mostly be just drivel, I fear.
4. Get away from the computer.
Ha. Ha ha. I can't step away from the computer because it's my brain. It's my head and my outside world and my sketchbook and my magical answer-machine. I do go away from it sometimes, as earlier this afternoon when feebly trying to do a bit of my new painting, but it soon calls me back. I will try to get away from the computer. I have a plan to sort out all the photos and documents I have relating to my family history ... but then I'll probably scan them.
5. Quit beating yourself up.
This is a good one, because who wants to suffer the Dantean levels of self-flagellation we inflict upon ourselves? Could I really stop berating myself for not publishing at least one novel, not winning every competition I enter, not getting up while it's still dark to jog round the garden (no way I'm going public), not doing all the other thousand things I had every intention of doing when they first entered my psyche (probably in around 2002)? And if I could, what would happen? Would I achieve anything at all? Perhaps if I cut myself a little more slack, it might result in less time wasted feeling guilty. Or it might result in complete indolence...
6. Take breaks.
I do like to keep busy. I also waste an awful lot time playing games on King.com and I don't think that really counts as taking a break as it makes your eyeballs feel like frozen sprouts. I will try to stir myself more often. Look, I will go and check on our tea right now...
7. Sing in the shower.
I absolutely believe in singing at every opportunity. I favour the Marseillaise which I know in French without ever having knowingly learnt it (this spooks me -- I suspect a previous existence as a Revolutionary). I also like to sing Jerusalem and Downtown and Monsieur Dupont. I also love to sing carols and hymns, favouring descants, but have been warned by my children not to do this at any school event.
8. Drink coffee.
No, coffee is bad. Drink Dragonfly Eary Grey Rooibos tea instead. It only smells slightly of fish and won't keep you awake at night or make you feel as though your heart is making a bid for freedom through your ribcage. 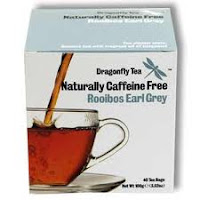 9. Listen to new music.
Yes! I completely endorse this one. It's very stimulating. To show willing I have just this very second downloaded Quisiera by Raul Orellana from iTunes, a masterpiece of Spanish house music from 1990. Oh, those tinkling milk bottles (that's what it sounds like to me). I loved this back in 1990, all too briefly, and have been trying to remember what it was for, oh dear lord, 21 years.... By sheer mind power, I have tracked it down. Hurray! (OK, so it's not completely new to me, but it's not my usual thing and my memory is very bad ... does that count?) 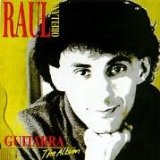 10. Be open.
I feel I've got this covered. I'm about as eclectic as it's possible to be without exploding, I think (perhaps I exaggerate a little). I like ... Proust, Big Brother, aubergines, washers, Spongebob, Mike Harding, Dickens, Dvorak, Puff the Magic Dragon, Project Runway, Freud, bagels, starlings, true crime, Melvyn Bragg, pork scratchings.... What do you like?
This exercise is taking on a life of its own so I'm going to stop there for today. More soon...

10 down and 19 to go! Jane, I'm telling you that you must try and get published in 2012 because I've been hanging on to every word and nodding and laughing... even at this ungodly hour of the morning when I've got up early to jog around the garden...... and of course now I'll have that damn song of Monsieur Dupont ringing in my head all day. Something I'd forgotten about but which has now risen to the surface of my memory with a vengeance. As for me, I must consult my list to see what I'm doing for the rest of the day... Monsieur Dupont la la la la.... was that Sandie Shaw? Now I'll have to google it to find out. Curses Jane!!!

What a brilliant post - With love another listaholic! x

A non-listaholic here: I daren't do them because, I think, I would be confronted with how little I achieve...........

Am also sitting mentally singing "Monsieur Dupont"....... perhaps I should go to Tesco's, stand on a conveyor belt and belt it out loud and long to a captive audience .........?

PS: I adored "Project Runway"........ ADORED it, especially the series that had the chap with the tattoos all around his neck! I was secretly in love with him.

I also had to Google:

Fabulous post Jane... can't wait for the next installment.

A void in your life and enough talent to fill it... it worked for Lowry

Has anyone written a novel in list form? It could be an evolving To Do list, a sort of Bridget Jones for the would-like-to-be-better-organised-but-know-it's-hopeless generation, if such a thing exists...

Loved the NY posts by the way - took me back (sigh)

All so true, so very true. Although you're wrong about your lists being embarassing. The 1974 one is sweet and brilliant - so many ideas and plans. That's made me think - I don't think I ever wrote lists when I was young, but I do now. Did I just get on do stuff when I was younger? Maybe I just never made plans?

I don't remember Monsieur Dupont, and just had to check it out on Youtube. Hmm... it's no 'Chirpy Chirpy Cheep Cheep', is it??

Oh my stars! That list for the holidays. Why are you not running the country? It is so ambitious, so full of verve, so totally together.