Charles and Camilla in the frame 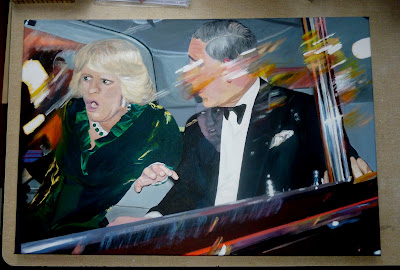 I've finally finished my painting of Prince Charles and Camilla Parker-Bowles in their car on the way to the Royal Variety Performance on 9 December 2010 (I can't believe it happened so long ago already).
I did the painting as a kind of 'homage' to Richard Hamilton and his painting 'Swingeing London 67' which shows Mick Jagger and the art dealer Robert Fraser handcuffed together in a police van as they arrived at court on drugs charges in 1967. I've always loved that picture which actually exists in six different versions and is a mixed-media piece with screenprint elements and even metal handcuffs embedded in at least one version. Whenever I see it in an exhibition, it always makes me happy.
So that's why I tackled this one. It's acrylic on canvas, about 30 x 20 inches. It was very exciting to paint. I did C & C inside their car first as they seemed to be one level of 'reality' in the picture. Then I did the weird reflected faces of the 'attackers', one of whom seems to be embedded in Charles' shoulder. Finally I did all the strange dashes of reflected light on the various windows which I really enjoyed doing.
Quite often when I'm doing a picture, thoughts occur to me about it that I hadn't had before I started but which seem to reinforce the 'interest' of the picture for me. In this case, I thought of C & C in their perfectly lit 'cage' of a car and how this could stand for the Royal Family as a whole, kind of caged by their position in society where they're both protected and curated and, of course, hugely privileged, but also restricted and frozen by protocol and history and all the ridiculous fanfare that surrounds them. Meanwhile, the rest of society is moving on, breaking up and turning nasty every so often, changing, dazzling, evanescing, but the Royals just have to keep on doing their royal thing like waxworks. I'm not a Royalist, by the way, far from it. But I was very struck by this image and the understandable fear on C & C's faces. They were very vulnerable in this situation, in spite of all their bodyguards and bullet-proofed car. The car got separated from the rest of the cavalcade, a window was broken and Camilla was poked in the ribs (no doubt as hard as possible) with some sort of stick. The 'mob' were chanting 'Off with their heads!' -- was that a wittily historical reference or kind of obvious? The two of them must have been terrified.
But beyond all of that 'meaning', I was really most interested in the intense colours in all the reflections.
Posted by Jane Housham at 12:49

Fantastic take on the Richard Hamilton Jane. I am sure the significance of the image is what drew you to it and its parallel to the original's social commentary.
Congratulations are also due on your Sketchbook project review, richly deserved. It is a very moving document and deserves recognition.

FAS-TAS-TIC! Brilliant artwork, and interesting to read your thoughts about the image and how it symbolises the monarchy and society as a whole.

Wow, brilliant! I love the reference to the Hamilton painting (I didn't know there were so many versions of it - thank you once again for some art education!).
Your description of the royals as waxworks in a glass case is so perceptive.
One last facetious thought - I've just realised that Camilla is very reminiscent of Grayson Perry!

Really interesting choice of subject, insight to your inspiration, and the creation of connections that undertaking the work stimulated.

Very much enjoyed reading your creativity posts too.

Very hard to choose exactly the right grey on the Unicef website though...

What a masterful use of colour and tone. I love this but wish Elaine had not mentioned Camilla looking like Grayson Perry. I think that thought is going to stay with me. Which gallery is this heading to?

In terms of the painting, I envy you your ability to have painted that green satin ruffle.