Welcome back to my very personal 'interrogation' of the 29 Ways to Stay Creative featured recently on Lesley's blog...

So far we've reached No. 11: Surround yourself with creative people.
Truth be told, I'm a rather solitary person, having grown up as an only child and become very used to finding ways to keep myself occupied (viz yesterday's childhood activity list). My mum once published, long ago, a short story in The Lady which was about a young mother with a horror of other people's children and who preferred her little girl to amuse herself safely at home alone. That was just a character trait of the main character and not the actual subject of the story but that was the element that struck me when I read it years later and remembered how few birthday parties and sleepovers I went to -- the story was almost pure autobiography. I also remembered that the number of times people came to the house was so few that these occasions had mostly been elevated to the level of family legend by the frequent retelling of the 'terrible' things that had happened when children were rashly admitted to the house. A little Scottish boy called Nigel White came with his parents, just before Christmas one year in the late sixties. He became famous in our house for running up to his mother at one point and crying out in his little Scottish voice, 'Look, Mammy, a feeeeeee-ry' [a fairy]. Then he uncurled his little Scottish fingers to reveal one of our beloved glass Christmas baubles crushed to glitter in his little Scottish hand.
Life has gone on and I have been through intensely social periods but, since we moved down south a decade ago, I am not surrounded by very many people at all, alas, creative or otherwise. That's entirely my own fault and I vow right here to do something about it. My closest creative companions are you, my blogchums, out there, and I'm very glad to have you.
No. 12: Get feedback.
This leads directly on from No. 11, I think. But lovely blogfriends are probably not the best people to ask for feedback because they are too kind and encouraging to say, 'That painting's not so great, have you thought about taking up gardening?' One probably needs the kind of ego-crushing criticism you supposedly get from your fellow students at art school. Actually my husband is brilliant at pointing out the key thing that needs to be done to improve my paintings and the like, so I rely on him for an honest opinion (and I can take the criticism too, it's just nice and warm in the cupboard under the stairs. No, I'm not crying and poking my eyes out with a paintbrush, really, I'm not...)
13. Collaborate.
Oh dear, we've hit a bit of a dry patch here. No creatives, no feedback and now precious little collaboration.
Collaboration is probably the thing I find the most difficult as I'm very good at thinking I know best. When we have training days at work where we have to go in groups and make teddybears out of paper (we actually had to do this once), I'm usually the one that wants to give it a go and has a good idea for mass production of paper teddybears, which then turns out to be the antithesis of the team-work solution we were supposed to find. It isn't teamwork, it's a dictatorship, and a misguided one at that.
I also have problems with ownership when it comes to collaboration. If a group of people collaborate on a single piece of work, who will 'own' the piece when it's finished. Truly collaborative people don't even think about such things, I'm sure -- the satisfaction is in the joint endeavour itself.
I've just remembered a single collaborative project from when I was doing my foundation art course a few years ago. In pairs, we had to dress a mannequin in an Elizabethan costume made from scrap paper. As I was 'old' and everyone else was 18 or 19, I was the class pariah and I'm sure no one particularly wanted to be my partner (it was just like waiting to be picked for the team in PE ... sob) but I did end up with a very nice girl and I remember I enjoyed it a lot -- a mad afternoon creasing and crinkling paper and making with the staple gun. 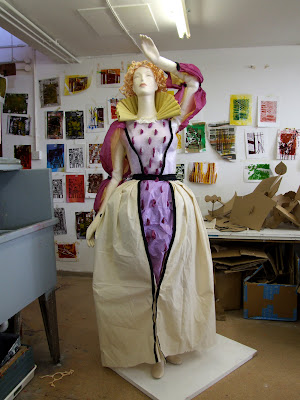 OK, so more collaboration would be a good thing.
14. Don't give up.
I think I'm OK on this score, just about. Look how many goes I had at getting just the image I wanted from some old footage: 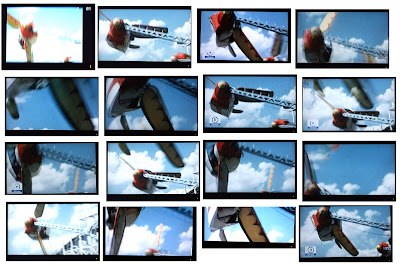 ... before I finally got the one I wanted: 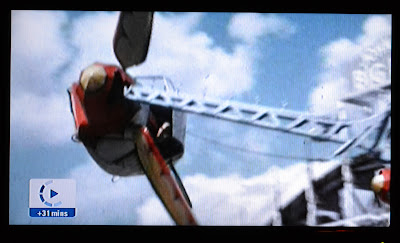 However, I did give up my printing class out of frustration at how bad my prints were: 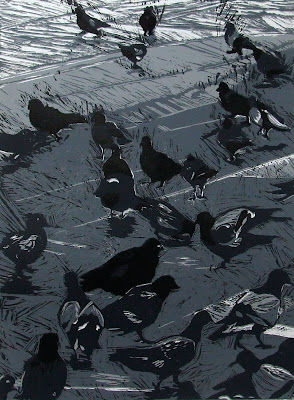 Sometimes I think my 'giving up' is disguised by my starting on something new, which doesn't feel the same at all. So perhaps this is also one for me to work on.
15. Practice, practice, practice.
I practise SO hard on my king.com games. Does that count??
16. Allow yourself to make mistakes.
Oh I hate this one. I absolutely hate making mistakes. I'm trying to think of something where I made what I considered to be a mistake and then it magically turned out better than intended... 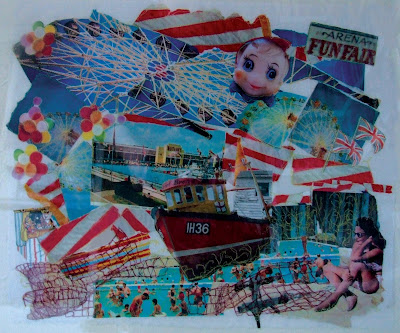 The only thing I can think of along those lines is the above stitched collage which I did on a one-day course that I thought was going to be about 'lifting' images using solvents and the like but wasn't. Once I'd realised that I'd misunderstood, I just got on with it and really enjoyed the day.
17. Go somewhere new.
I totally endorse this one, but does going to a new village five miles down the road count, or do you have to go to Uruguay or Krygystan? I love adventures but prefer 'safe' adventures (it's not boding well for no.20...). I had a lovely day out in Essex a couple of years ago, where the highlight was Wivenhoe.
I'm stopping there for today as we have borrowed the boxed set of The Killing series 1 and are watching three episodes a night. Completely addictive.
Posted by Jane Housham at 20:50

I won't do a huge comment here. I could because I love what you've written - so eloquent and so true. I can understand your need for 'ownership' of a collaborative project - but that to me signifies that you've put something of yourself into the project.

But (here comes the bloggy-positive comment) in every image, all I see is originality and creativity. If you can do all this on your own, imagine if you had one or a few muses to inspire?!

I was also a bit of an old-aged pariah at Uni last semester. It was a shock to my system, as I think I'm pretty funny and no one was interested, or they didn't understand what I was saying to them because of the generation gap. Shocked.

oh Jane, you know when you read something and you wonder if the person writing it is actually inside your own head?! only my game is Tetris... cant beat the classics!

Fabulous entertaining writing again Jane. I smiled when I recognised that dictator in collaborative efforts as me. And what is wrong with your printing... looks quite exciting to me!

Love your writing and can identify with so much of it - but I think my rule is avoid rules as you end up obsessing about them instead of your work - well I do. The best quote I came across last year came from Chuck Close a disabled painter - he said "Inspiration is for amateurs, I just get to work". This has seen me through many down spots, when I just get on and do something even if it is sorting or tidying.
And I agree with Gina that print is stunning! Have you tried using bright colours to give it a more abstract feel?

That print is absolutely fantastic and that is not a blogchum just being kind for the sake of being kind. I loved this part two and now I have to look at this king kong stuff to see what I'm missing ... but I don't need another obsession... Joanna is right, you write like you're reading it aloud inside my head. It flows, it is eloquent, it is funny and it's also heart wrenching at times. Some phrases tug at my heart strings for some reason. You paint pictures with words as well as paint Jane. Just fabulous to read.

Like your other commenters, I'm really enjoying this 'exploration' of yours. I'm not sure that collaboration should be considered compulsory. It works for some, but not for everyone. It can help you get out of a rut, but so can a lot of other things.

But being a bit solitary myself, maybe I'm not the right person to comment. It's difficult to know if other people can really help. I always think I want more feedback, but I know that what I really want is praise and encouragement. Mr Kitsch is always positive, but quite frankly, I feel that's his job - to praise me at all times! But that does mean that I can't trust him for an honest opinion. And, as you say, online feedback is difficult, because no-one wants to offend anyone else.

But, if bloggers don't like your work, they just won't say much, whereas, we all keep telling you (sincerely) that your work is amazing. So I think you're being quite critical enough by yourself!Maybe you should believe the good stuff. What was that one about not beating yourself up??