Day 5 and the art was really ramping up now. We headed straight for MOMA, first thing. I can't begin to capture MOMA in a blogpost, but will just touch on a couple of things. I was tickled by the work, above, which was pulsatingly red/orange and both beautiful and funny (I thought). It dates from the late Sixties, when the 'death of painting' had been confidently declared, so although Arman (not come across him before, but he is a good one to Google for images - he loved accumulations of the same object...) was still using brushes, he wasn't painting with them.
This small work by Hannah Wilke caught my eye because it used a vintage postcard. The 'kneaded erasers' are possibly standing in for gum. There was a whole room devoted to Wilke, who seems to have straddled many different art disciplines. She died far too young.
Another artist who died too young is Felix Gonzalez-Torres. I'm only finding out all this information about these artists in retrospect, you understand. Gonzalez-Torres died in 1996 aged 39. When you come across this silver sea of sweets in the context of a serious state gallery like MOMA, it's very thrilling to realise that you won't be penalised if you take some of the sweets. You will be 'stealing' the work, but in a sense that act of stealing constitutes the work, or is a vital part of it. It's such an incredibly simple thing and yet the act of taking the sweets galvanises the relationship between the artist and the viewer, making the latter feel as though they're crossing boundaries (of course they're not, because the 'stealing' is permitted, and the card on the gallery wall said that the sweets were 'endless', so they are just replenished all the time). For the last few decades, a lot of modern art has been trying to undermine the various ways in which 'art' is venerated and taken so seriously and this piece succeeds in this aim better than most. My kids exulted in eating their little bits of 'stolen' art. I brought mine home and they're here on my desk, still 'vibrating' (for me) with my experience of seeing them in situ, bending down, daring to grasp them and stowing them in my pocket. 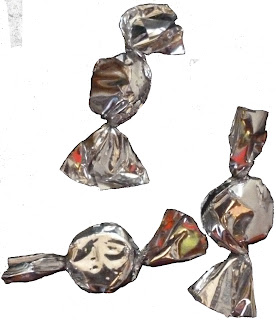 Talking of eating the art, the weirdest experience we had in the Museum of Modern Art was Rirkrit Tiravanija's Untitled (Free/Still). It consisted of a kind of 'soup kitchen' in the middle of the gallery where delicious Thai vegetable curry was being served to all comers, for free. This was the art. 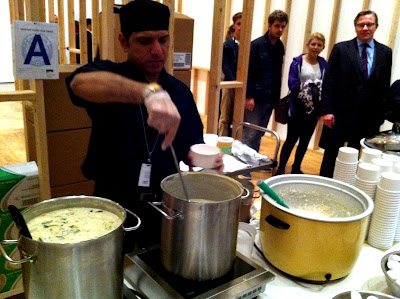 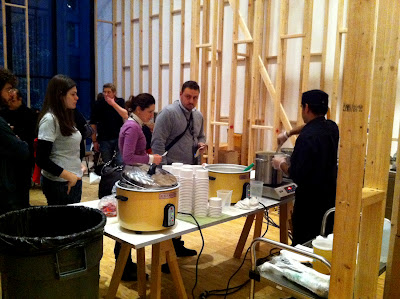 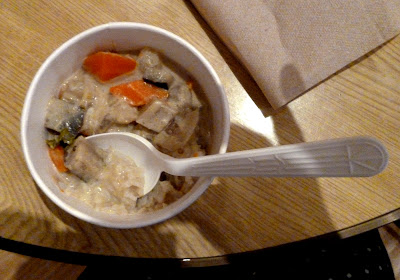 Here's the blurb about it, from the gallery wall: 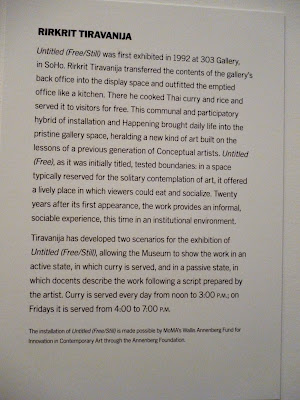 I guess this works in much the same way as the sweets. It was very exciting and transgressive to be sitting eating curry in the gallery and I guess that we became part of the exhibit for as long as we were partaking. People were very curious and couldn't quite believe that they were allowed to get the food and eat it there. I'm so glad the curry itself was so tasty. It wouldn't have been the same if it had been horrible. 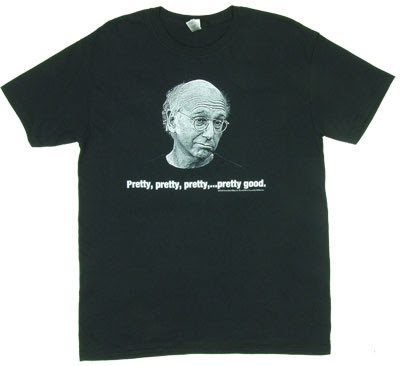 After MOMA (no need for a lunch stop now!), we walked down to the International Center for Photography, taking in the HBO shop on the way in order to pay homage to our beloved Larry David of Curb Your Enthusiasm (I forgot to include Curb on my list of Top TV for 2011; the latest series has been wonderful). At the Photography Center, there was a big exhibition of photos remembering 9/11 which was very sobering. We had decided not to go to Ground Zero because it seemed a bit ghoulish but these images seemed a fitting way to acknowledge the city's terrible wound. 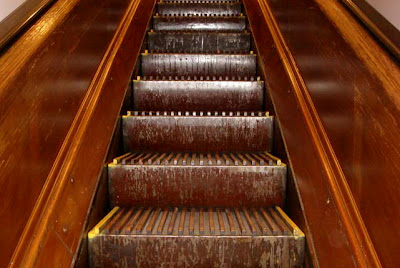 Getting tired now, but for some reason one of our number (no names) had become fixated on Macy's, so we trogged to Macy's and it turned out to be rather limp and weary (like me). The knackered old escalators were something else. It was good to visit another iconic NYC place but not for very long.

I just have to mention the pizza place we went to that evening: John's, slogan 'No Slices'. We just picked it more or less at random but it was fantastic, housed in a big converted church with a huge stained glass dome. If you didn't have a table (of course we didn't), you had to stand in the bar until your number came up on a digital board, which was quite exciting (for a while). The pizza was really good and it turns out that the place is well known and has hosted the end of series parties for The Sopranos (another of my absolute fave shows) so who knows, maybe I sat in the same chair as Tone!
This was the night that the lucky males in our party went to see Stephen Merchant's stand-up show but it was too naughty for the girls (well, maybe I could have taken it...), so Dora and I went out on our own and hung out in Times Square, which we liked so much. We went to M&M's World where you can fill a bag from the vast selection of colours you can see some of above. All around us people were loading up with great sackloads of M&M's, but we managed to stop at only a relative few (it was the same syndrome you get in a bead shop when you can hardly bear to stop picking colours).
Then we went back to the hotel and watched the (grim) final of American X Factor. It was only good for staying awake until the men came back.
Posted by Jane Housham at 18:00

Loving all these posts about New York! I'm impressed by how much art you fitted in. And even more impressed that you had the energy to go out again in the evenings!

Loving how much you crammed into your visit. I can understand why! Culture at all levels and I am thoroughly enjoying reading your posts, although I do feel my own knowledge has enormous gaps.

Another action packed, food rich and culture drenched day in the Big Apple. Am off to find out about Hannah Wilke. A name I've never heard before but I like the concept so must try and see more.