The House at Green Knowe

Last Sunday I had a magical experience: I walked inside one of my absolute favourite childhood books: The Children of Green Knowe by Lucy M. Boston.
In fact I loved, and still love, all of the Green Knowe books but the first one is extra special. Lucy M. Boston lived in the Manor at Hemingford Grey, a very pretty village near Cambridge and at the weekend I went to see it with two friends. We were shown round by Lucy's daughter-in-law Diana Boston (whose late husband was Peter Boston, Lucy's son and the illustrator of all the books) who was extremely likeable and certainly seemed to exist almost wholly in the service of the amazing house, which is the oldest inhabited house in the country -- the first parts of the house were built in Norman times. 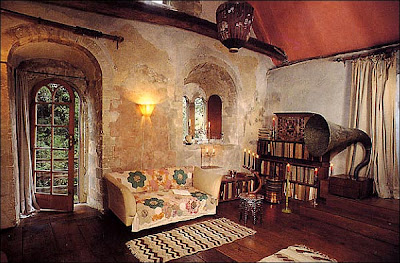 You couldn't take photos inside the house so this picture and the next are borrowed from the Green Knowe website which also has details of how to visit. This is the sitting room upstairs, at the heart of the oldest part of the house. The gramophone that you can see still plays, beautifully, with bamboo needles and we listened to part of one of Bach's Brandenburg Concertos. During the Second World War, Lucy Boston invited airmen from the nearby RAF base to come and listen to her classical music records. She sent the invitation via the padre on the base and she expected that one or two might like to come. The padre sent word back that a bus would be coming with 36 men! Lucy had to hurriedly construct seating for them all out of mattresses and car seats and these are all still in situ. The men came on Tuesday and Fridays from 1941 onwards. There was a lovely painting in the house by Elisabeth Vellacott of the airmen sitting listening to that giant papier mache horn, and while the music was playing I thought of them going off on missions from the base and perhaps not returning.
Elisabeth Vellacott is a not so well known 20th century artist who lived at the Manor with Lucy Boston during several periods. Many of her pictures and some of her textiles are still in the house. Here's a very interesting account of her life.
The house is overflowing with textiles, including some fantastic patchwork curtains dating from 1801-3. They inspired Lucy Boston to start making patchwork quilts herself, initially during the War when they needed covers for the beds (it's freezing cold there in winter) -- she first made these using teatowels, tablecloths and other utilitarian fabrics. She was a prodigious patchworker and often made one or two quilts each winter. She was very adept at using patterns in her fabrics imaginatively and could get several completely different panels out of one pattern. There was a bed in the house piled high with quilts and we were shown each one in turn -- they just seemed to get more and more interesting.
We went up through the house until we got to the attic bedroom which is the setting for Tolly's room in The Children of Green Knowe. Everything was there as it is in the book, right down to the netsuke mouse who comes alive in Tolly's pocket and the cage where the finch used to hide from the owls. It really was magical. The item that I felt the most thrill in seeing was the nameboard of Feste the almost mythical horse. Tolly leaves a sugarlump on it out in the stables and it disappears every day (but maybe Boggis is just putting it in his tea?).
The gardens were absolutely gorgeous too and afterwards we went for a late lunch at The Cock and that was fab too -- but you need to book. You couldn't ask for a nicer day out and I already want to go back again.
Posted by Jane Housham at 11:45

Jane,
I remember reading an article about the Green Knowe books which I thought was in one of my 'Illustration' magazines but I've just had a quick look and cannot find it. That will annoy me now as I want to find out much more about them after this post. I've never read the books or even seen any of them. What a wonderful day you had. It comes across as being very special.Something for me to follow up I think!

I know I've read the books but really can't remember them :o( I'll have to read them again.

That was a very interesting account of your day, thank you.

It really does sound magical! I think it's often more rewarding to visit a smaller house like this, rather than a massive stately home. So much more character. I've never read the books, but it must have been wonderful that there's so much there that you could recognise.

I visited the Manor last year and was blown away by it all... the house, the garden, the patchworks and Diana who was so entertaining. A fabulous day out and I hadn't even read the books!