I wrote earlier about how much I love magpies, and now here's proof of my affinity with them. All the pictures in this blog are of things I've picked up off the ground in just the last couple of years.
First off, badges: 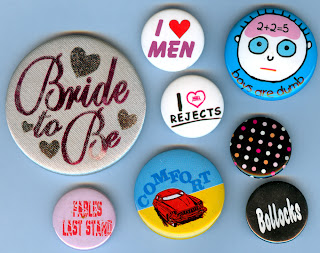 I wonder if, perhaps, a flock of girls on a hen night passed nearby, shedding mildly risque badges as they went? Weirdly, this hen night seems to have included the only southern supporter of "Geordie kings of bar room sleaze" Fable's Last Stand.
Next, photos. How is it possible for so many people to have carelessly 'lost' these photos of themselves and their offspring? 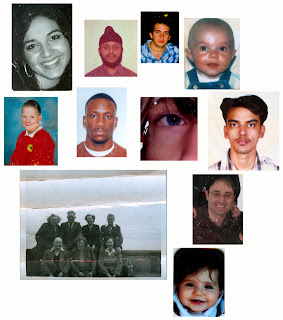 I suspect a secret photo-dropping tendency, a kind of Facebook on the cheap...
Here are two secret messages. I feel the note on the Sainsbury's leaflet was written by a till operator who genuinely feared for their sanity if they had to swipe one more box of Taste the Difference mini mince pies in the two-month-long festival that is Christmas in this country. 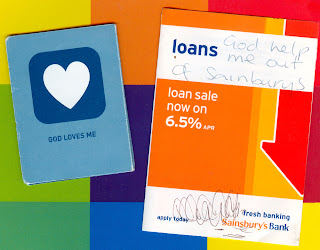 Now we're getting to the special stuff, the treasure. Here are lost hearts, so many. Hearts so carelessly thrown away, as ever. 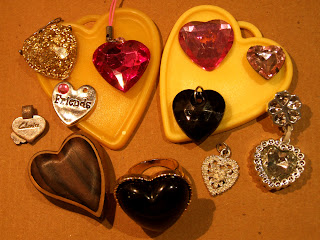 Then, the great mass of single earrings and shiny, mashed up items I've dug out of the mud and mulch around the campus where I work. My colleague finds it most unsavoury, but it makes me very happy to pocket a shiny. I am sorry, though, for all the people with only a single earring now. They'll have to donate them to X Factor Wagner. 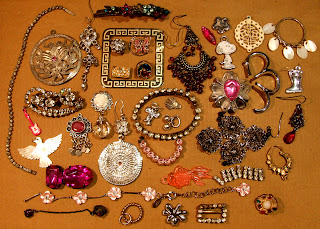 Finally -- and I've saved the best till last -- a kind of freakish disco ensemble: 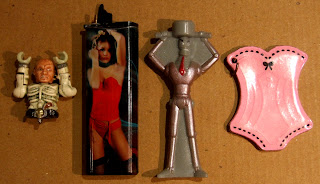 That's just about all my best treasures shared with you now. When I was a child I was given a tiny set of cardboard drawers, about a four-inch cube in shape. There were three little drawers and in them I kept my treasures: a little block of chipped purple quartz, a button with a cameo on it, a metal heart commemorating the Relief of Mafeking (why on earth did I have that?), fragment from an old clock, a little bit of carved horn. They really had value for me. I used to take them out nearly every day and order them according to different criteria. Kept me happy for hours. A while ago I came across some of these same treasures, which I'd kept but not looked at for many years. They seemed so terrible humdrum and shabby and I felt a little sad. I can only lay hands on a few of them now as they seem to have got scattered about. I've still got the drawers too:

A few years ago the four of us went into London to join in with the breaking up of Tomoko Takahashi's installation at the Serpentine. This article from the Guardian paints the picture. The artist had filled the gallery space with her trademark tide of charity shop toys, board games, jigsaw pieces and counters as well as larger objects such as fridges and cookers. It was all so much junk but there was something wonderful about being allowed to go into a stern London gallery space and help yourself. My kids and I thoroughly enjoyed ourselves. I still have my bag of mad bits and pieces -- plastic wheels and bits from Mousetrap, random jigsaw pieces and letter squares. I value it because it has passed through the 'filter' of an artist's intention, even though it's just junk really. The kids enjoyed making collages with their bits and dripping molten candle wax all over them.
I value the bits and pieces I find on the ground almost as much as things I've paid for, sometimes more so. It's the charity-shop syndrome, but more so -- you've found something where the likelihood of finding something good was very low, and so you cherish it all the more fiercely. It takes on an aura of uniqueness.
If we are defined, in some degree, by our belongings, I am a very strange person indeed.
Posted by Jane Housham at 00:14

Suppose we are defined by our belongings in the way that it says something about the choices we make. I would of course, never think of you as a strange person; rather someone who looks for beauty in unexpected places. And who treasures what most people don't even notice.

My pockets used to be filled with all kind of quirky things as a child; even dead flies (which I would later bury in matchboxes). For many years I had this little plastic panda in my pocket; it fell into my grandparents toilet and disappeared. It's strange how one rememberes all these little things, which didn't feel small at the time. And still doesn't, I suppose. Looks like you have a little bear there yourself?

Wonder what happend to all the other single earrings, maybe they are just waiting to be discovered somewhere. Lost photographs are always sad, so is the Sainsbury's leaflet.

Thank you for yet another great article, really enjoyed it!

Wonderful blog post! I love finding things too. I started collecting discarded shopping lists from the supermarket. They're quite mundane, but a strangely intimate view of the life of a stranger.

The little objects and jewellery are wonderful. I can't believe you've found so many. And it's definitely not strange. There's a whole magazine devoted to found objects http://www.foundmagazine.com/.

I love small treasures, and I'm a bit sad that you found your old ones humdrum and shabby. But perhaps that's a sign of being healthy and adult and not a mad hoarder. I can't make up my mind. If we put all the junk in a gallery, like Tomoko Takahashi, then it's art. If we fill up our house with it, we become a case for social services...