About a year ago I was looking on the internet for spiky structural images -- pylons, rollercoasters, scaffolding, that sort of thing -- for no other reason than that I like the graphic qualities of lines of steel. I found this little image: 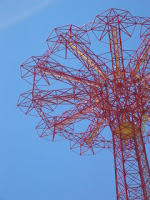 I had no idea what it was of, exactly. It looked like some sort of derelict fairground ride or possibly some sort of drilling rig. Anyway, the reds and yellows against the blue spoke to me very much and I decided to use it as the basis for a screenprint when I did a printing class. This was the result (rather, this was one of the better ones of my beginner's efforts): 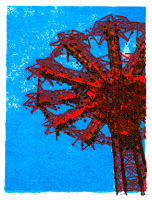 The actual size of the print is only about one inch across!
Then, this summer I went to Paris for the day, with the family, from our main holiday near Le Touquet. As I spent a (rather lonely) year as an au pair in the suburbs of Paris when I was 17 (before I went to uni) and hadn't been back since, all my memories of Paris were rather out of date. My favourite place, in 1979, to lie low and avoid my horrible little French charges was the Centre Pompidou, so I persuaded the family that we should head there on the afternoon of our day trip. By chance, there was a fantastic exhibition on called Dreamlands, about fantasy worlds, in particular the fantasy worlds created by fun fairs such as Coney Island. It was brilliant, and what should I spot, in a big blow-up of an old postcard of Coney Island, but my spiky structure: 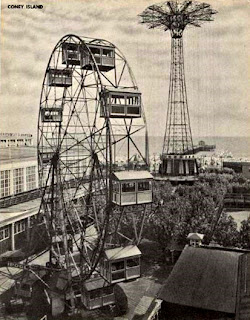 Now that I knew what it was and where it was, I was able to gather together lots of images of it. It's called the Parachute Drop and looks as though it must have provided a terrifying experience. 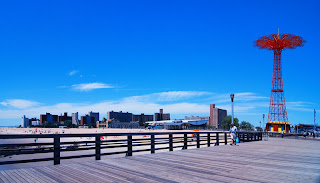 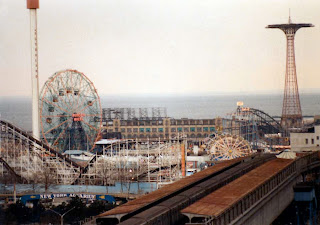 Coney Island seems a rather stark, neglected place now. I've done my trick of 'travelling' there via Google Earth. The parachute drop is still there, like a lonely exotic bird in a rundown zoo: 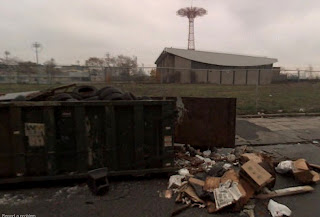 But I feel I could spend months, if not years, doing artwork based on Coney Island and its wonderful, dreamlike structures. 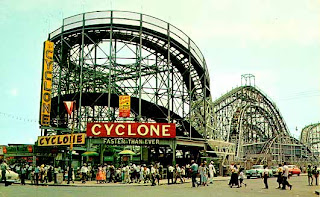 My final encounter with the parachute drop was, again, by chance. It was already up on my pinboard, right in front of my eyes, but I hadn't seen it for what it was. It's in the background of a work by artist David Wojnarowicz called 'Arthur Rimbaud in New York'. It looks like a photomontage, I'm not sure. It's a postcard I bought from the Serpentine ages ago. Why didn't I notice the parachute drop till now? I wasn't looking. The Dreamlands show in Paris made great play of the fascination the Surrealists had for fantasy constructions such as Coney Island. There was old film footage of Andre Breton and cool surrealist friends enjoying the teacup rides and giggling on the waltzers (I hope I'm remembering right -- you get the idea). I envied them the newness of the experience and their capacity for wonder and transport. Me, I'm just scared of fairground rides, but I love to collect images of them.

I am scared of fairground rides too.......... would only ever go on the really sedate ones! Love that top image, I can see the attraction.......

Thank you so much for visiting, it helped me find my way back to your blog. Yesterday I played around with Google Reader, and seem to have deleted many of my subscriptions! Fairgrounds are something really rare and exotic in Norway; they seem to have a magnetic effect on me.

Jane, just to let you know that we are shelving the follow up to the "Seaside Project" till New Year as we are all up to our eyes in other stuff. We will DEFINITELY be starting a new one then though, and would LOVE to have you along with us...... :O)

I love the way we discover things like this. Because you worked on the image, it lodged in your head in a way that the image from the postcard did not. I like fairgrounds too, but I'm more drawn to the graphics and the colour and the lights. I like them when they're run down. I went to Barry Island last year, and there are some really tatty old rides still left there.