My dad's birthday is coming up and I've been trying to think of something interesting to get him. Recently I researched his side of the family, which he was fascinated by, so I thought I'd try to bring somebody from his family's past to life for him. This is easier said than done, but you never know what Google will turn up.
I wrote out a list of various places and surnames that had cropped up in his family tree and then I started searching fairly randomly. Tyne and Wear Archives (my Dad's family are from Newcastle and thereabouts, going back) have some wonderful early mugshots of criminals from Newcastle Gaol dating from 1871-1873.
One of the criminals shared a surname with one of our relatives -- or rather our relative had the same name for his middle name: Jobling. Here is the naughty fellow: James Augustus Jobling... 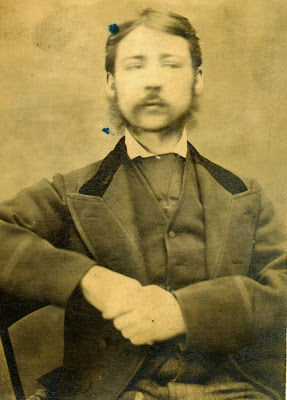 James was 26 and unmarried when he was sentenced to one month in prison for malicious wounding in 1873. Here's his entry in the big book of crime:

A month doesn't seem a very long sentence for malicious wounding, although by the 1870s (judging from the details in the criminal registers) it was no longer the case that people were transported to Australia for stealing a handkerchief or a lamb, as in the late 18th and early 19th centuries (transportation to Australia ended in 1868 although it had become a rare punishment by then). Still, crimes against property seem to have been punished more severely than crimes against the person at the time of James Jobling's misdemeanour.
James' clothes seem rather fine in the photograph and his whiskers, though wispy, seem to betoken a person of some standing. In fact, James' family was one of the most powerful in Newcastle. His father, Mark Lambert Jobling (born 1806), who had died three years previously, had been Sheriff of Newcastle upon Tyne, as well as a solicitor, 'coal owner', glass manufacturer and ship owner. James was the fourth of Mark's five children and they grew up in homes on one of Newcastle's main thoroughfares, Percy Street.
Although James had studied theology in London in the early 1870s, he was destined to follow his father into manufacturing. Notwithstanding his criminal record, by 1881 he owned the Tyne Oil and Grease Works, and in 1885 he bought out a local glass manufacturing firm, Greener & Co, which was going under. Jobling was one of its chief creditors as he also supplied the raw materials for the pressed flint glass that the company specialised in. Renaming the company James A. Jobling & Co, James doesn't seem to have made much of a success of it until his nephew (his sister Julia's only son out of six children) Ernest Jobling Purser joined the company in 1902.
He seems to have been a born businessman (he looks as though he belongs to a completely different era from his uncle James), and in 1921 he managed to acquire the European licence for Pyrex ware. The heatproof glass was a massive success and continued to be made at Jobling's Sunderland factory until it closed in 2007. Both James and Ernest much have become massively wealthy. Ernest got a pilot's licence and lived in this large house, Hylton Grange in North Hylton, near the factory:
He ended his days in Rathmines Castle, Dublin (he was Irish by birth) whilst James Augustus' last address was Sonachan House in remote Argyll, Scotland.
I've never been a massive fan of Pyrex (beyond its practical use), but I love pressed glass. Jobling's glassware became the closest thing this side of the Channel to Lalique glass and it was thinking about this that finally made me remember that when David and I were on our honeymoon back in the Nineties we actually bought a beautiful Jobling glass bowl. Our honeymoon was a collectors' tour around the North of England culminating in a night at the amazing Art Deco Midland Hotel in Morecambe, and we bought the bowl in Hexham. I can't photograph the actual bowl as, alas, it's stored in our loft at the moment, but I found an image of it online: 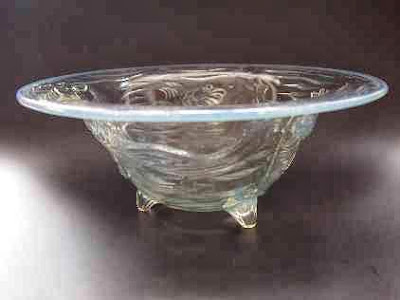 It has fish swimming around it and is really beautiful, opalescent.
But that may be my only link with James Augustus Jobling, for better or worse. When I went back to the Jobling in my Dad's bit of our family tree, I began to suspect that he was probably there in error. Children were often given their mother's surname as their middle name, so it might suggest that this person's mother had been a Jobling. However, his father, Henry Carr, was married to a Mary Faddy and many of the other children had Faddy as their middle name. I think Richard Jobling Carr crept into the family tree because another Henry Carr married a Margery Jobling at around the same time. On Ancestry.co.uk (which I am addicted to), it's possible to hoover up great tracts of other people's family trees, thus enlarging your own very quickly, but if there's an error in another person's tree then it will transfer to your own and may only be discovered after hours of diligent checking.
So, after all, I don't believe we're related to James Augustus Jobling, a bit of a wrong'un in his twenties (who knows what the story was there?) and the owner of the most important glass factory in the country.

One final note is that one of Ernest Purser's cousins was the Irish artist Sarah Henrietta Purser.

That looks like a bit of vaseline glass to me - I just gave away about 6 pressed India pale ale glasses to a mate of mine, dating from 1870. Funny. (please do away with the comment verification?)

I think you'd have loved to have had a wrong 'un your family tree Jane although he looks a bit weak chinned if you ask me. Those criminal photos are a treasure trove too. How come so many of them look about 12 years old? Fascinating story, meticulously detailed.

Your blogging is fascinating! I think I would love pouring over photographs as you have done. I think it feeds the imagination. (Yes, we all must turn off the comment verification!)