Yesterday I turned Radio 4 on at my favourite time of day, for the 9.00 to 9.30am slot. Apart from Wednesdays (sorry, Libby), I almost always enjoy the programmes in this slot. And yesterday was Thursday, so the slot of the hallowed In Our Time, my favourite of all. However, Sir Melvyn is still bestriding the fells or walking through Green Park or whatever he does when he's off air and the programme I heard was Last Bus to Serendip, made by Dr Aleks Krotoski about her 'Serendipity Engine'.
I love serendipity and I agree with one of the speakers in the programme, Phil Smith, who described the feeling when something serendipitous happens to you as 'a beautiful plane of ecstasy'. But as the programme unfolded I began to question it more and more. Dr Aleks, who is a clever and accomplished person and who has written lots of things I'd like to read, has made a machine which lives in suitcases and which tries to 'predict serendipity'. This very idea seems either self-contradictory (if something can be predicted then surely it isn't serendipitous, by definition?) or, less interestingly, just a bit of fun: a fancy name for a random generator of crazy combinations of things. I imagine it must tend more towards the latter, but the more I listened to the programme and then looked into the Engine online, the more irritated I felt that it was possibly being presented in a way that was, yes, quirkily 'fun' but also perhaps a bit bogus. The machine itself was described as very Heath-Robinson, fitting into a couple of suitcases and consisting of knobs and levers and flashing lights, but in fact -- and obviously it has to be, if you think about it -- it's an online thing. People who 'consult' the machine have to do various things including answering some silly questions such as 'What three foods would you eat if you were going to die tomorrow?' and turning a squiggle into a drawing. I'll come back to this in a moment...
The programme itself irked me somewhat by pretending to be full of serendipitous meetings which were clearly arranged beforehand so that specific people could talk to Aleks about their take on serendipity. I know that's how it must be in order to put together a reasonable programme, but in a programme about serendipity it stuck in my throat that there was this pretence. Obviously Narguess Farzad didn't just happen to be sitting in a park reciting Persian poetry by Hafez when Aleks K happened along and they got talking about how Hafez is consulted as a type of divination. Equally obviously I guess Aleks didn't just jump on a train to Exeter and happen to bump into 'mythogeographer' Phil Smith who then spoke so eloquently about serendipity -- but it was the fact that she pretended to jump on the first train leaving from the station and it happened to be going to Exeter that got my goat. I suppose I should have suspended my disbelief and just enjoyed the programme. I noted that Prof. Richard Wiseman didn't seem to have played along with the serendipitous meeting thing and he was just on the end of a phone -- he's my kind of sceptic.
Anyhoo, it got to the point where I thought, huh, maybe she didn't even go to Exeter, but Phil Smith had said that Aleks was sitting close to the bottom of General Sir Redvers Buller's horse, and, thanks to Google Street View, I found the very bus stop where Aleks is pictured on the BBC website (and above): 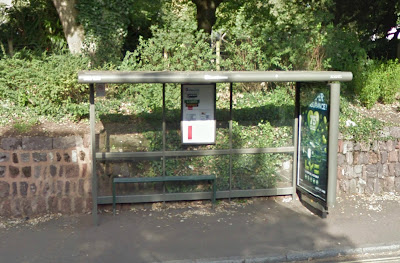 It is indeed just near the statue of General Buller on his horse, in the centre of Exeter. And if this isn't serendipitous, from one angle on Street View his horse has a traffic cone on its ear, making it look like a mad unicorn: 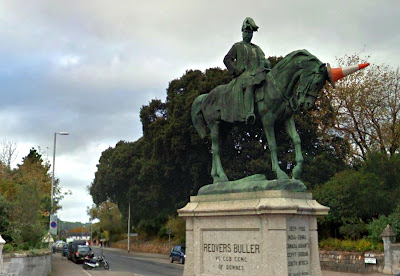 That made me quite happy.
Anyway, I decided to have a go at the old Serendipity Engine myself. First of all you had to draw a circle inside a square (on a sheet that you printed out), and then you had to make a drawing from a squiggle. This is mine: 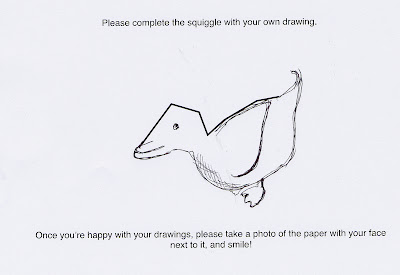 But then you had to let the Engine take a photo of you holding your sheet using the webcam embedded in your computer and the one I was on didn't have one -- so the pic was never uploaded. I answered all the other questions, including giving my address (postcode and house number), my Facebook, Twitter and Google Plus monikers, and I pressed the button to get the Engine's recipe for my special serendipitous 'koan' and the circumstances for considering it. This is what I got: 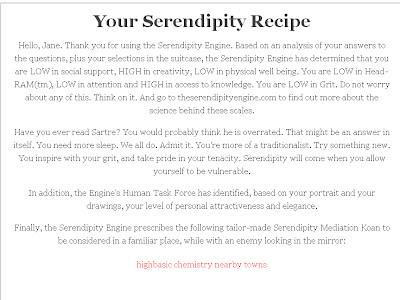 Well, isn't it just a lot of nonsense? The big giveaway is that apparently the Engine's Human Task Force had looked at my webphoto and my drawings to determine my level of personal attractiveness. I saw on the Engine site that it says real people are paid $1.50 a time to evaluate both your photo and your drawings. The creativity evaluation allegedly uses the Barron-Welsh Art Scale (which looks a teensy bit loopy). But my pictures were never even put into the algorithm because I didn't have a webcam. In lots of ways, I feel I should treat the Serendipity Engine in exactly the same way as I should have listened to the programme -- as something lighthearted and amusing, a bit of imaginative technology. But then I got rather paranoid and wondered whether there was conceivably some motive beyond fun for the Engine -- perhaps it's an experiment in how gullible people are, how readily they will give up significant and identifying data about themselves. Happily, there's a note on the Engine website that says if you want to remove your answers from the engine you can, by emailing Aleks Krotoski -- so I did, and almost immediately received a nice email back from her saying that my data was now gone from the dread engine. So all's well that ends well, and actually I'm sure the whole thing is far from evil -- it seems very transparent and there's a mass of information there to be read by anyone who's interested. Go on and have a look yourself, see what you think.
The end of the story is that, later on, I actually reached that 'plane of ecstasy' of true serendipity when I discovered that one of the random photos I bought in Brighton (it's not one of Henry's pictures -- different writing, no number, etc) on Sunday actually has an extraordinary link to my obsessive interest in the Hamiltons of Fintra. I chose a few pictures of houses, if they were identified on the back, because I love looking up old houses on Street View to see how they look now. Among three or four that I bought was this one: 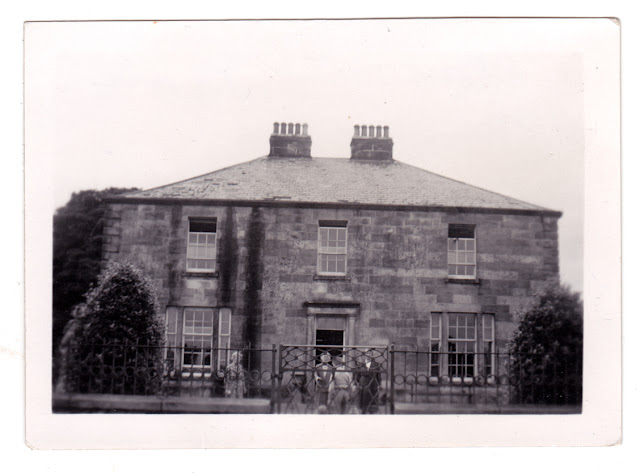 On the back is written: 'Dalton Fields Farm 14/7/40', so evidently taken in July 1940. When I googled it, I discovered that not only is the house less than ten miles from where I grew up in the Yorkshire Dales, but it was once occupied by a Joseph Glover, born in 1776. He married Elizabeth Hutchinson, from nearby Earby Hall, and she was the aunt of Ann Hutchinson, born 1803, who married James Hamilton of Fintra and was Henry Fitzgerald Reynolds' grandmother! 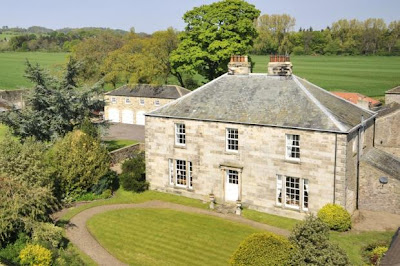 This is the house today. What really intrigues me is who the ghostly figures captured behind the railings of the 1940 photo are and whether they could possibly be relatives of Joseph Glover and Elizabeth Hutchinson? Three elderly ladies seem to be greeting a young boy. Is he carrying a suitcase? Was the photo perhaps taken as his parents dropped him off to stay with his granny and aunts for a holiday?

This photo has already given me an immense amount of pleasure -- serendipitously.

PS: I have read Sartre and I don't think he's overrated.
Posted by Jane Housham at 18:49

Perhaps that poor lad was an evacuee having to be taken in by three old hags who made his life a misery.... alternatively, your supposition is much nicer. I'm not sure if you were having a bit of a rant or not about the serendipity programme. I did not catch it myself but feel quite concerned for Libby's feelings..

what a wonderful narrative of serendipitous mythogeography, skiing the layers! (Phil Smith)