Back to Brighton in search of Henry's photos

Call me crazy (I usually do), but I've been back to Brighton again in an effort to gain 'closure' with regard to the cache of photos that I knew was there. I'd been brooding about those photos since I got the briefest of sessions with them back in June when I went to Brighton with my son for a Sussex University open day. On that occasion he dragged me away after about twenty minutes, but as I had already found a couple of photos belonging to 'my' Henry Fitzgerald-Reynolds, I couldn't get the idea out of my head that there might still be a few more left to find.
I got an early train on Saturday morning and by half past ten I was back at the flea-market stall, sitting on a little stool in front of the boxes of photos. 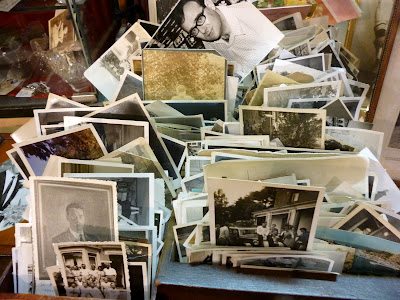 I went systematically through every photo, first looking at the backs and then at the fronts. Anyone who saw me sifting through the backs of hundreds of photographs probably thought I really was crazy, but the backs of Henry's photos are the best way to recognise them as he was very organised and numbered almost all his pictures as well as annotating many of them. Thus the one above of the vegetable garden is no.524 and looks like this on the back:
So I know it was taken in 1943 when Henry was 77. 18 Hazeldene Road, Weston-super-Mare was the last house he and his wife Gladys lived in together (Gladys lived until 1971 but seems to have spent her final years in London). You can see that this is the slightly shaky handwriting of an elderly man -- he was 17 years older than his wife. Even though it isn't a very successful photograph, Henry obviously thought it was worth keeping, showing, as it does, the 'back of house, closer up, Raspberry canes on right'.
All in all, I found thirteen more of Henry's photos during my trawl, including three without any annotation on the backs but where I recognised his daughter Kathleen, whose face I now know so well. Thirteen new photos was definitely worth the trip, and now I feel I need to really scrutinise them to see what new information might be gleaned from them. I wonder if I'll ever know who these people are, standing with Kathleen?:
And I wonder if I'll ever know what this building is or where it is?
Altogether, I now have forty of Henry's photos -- but what disturbs me is the thought of where the other 500 or so photos from his collection are (if I have one numbered 524)? They're out there somewhere, but I doubt I'll ever find them. I've scanned them all in order so that I can see Henry, Gladys and Kathleen growing older as the years pass by. Henry seems hardly to have changed over the twenty or so years that the images span:

I spent four and a half hours on my little stool at the photo stall! While I was there I heard all the browsers around me commenting on what was for sale and I can tell you that if you have an antiques shop or stall, the item that will arouse the most interest is a drinks cabinet in shape of a globe! Whether it would ever sell is another question. And while I was crouching over the photos, only one person spoke to me, a very nice woman (hello Jean, if you read this!) who asked me why I was sorting through the photos so carefully and with whom I had a really good chat.
My best find on Saturday was a new picture of my favourite of Henry's relatives, Nancy Hamilton from Tasmania.
As well as panning for the 'gold' of Henry's photos, I also picked out some other random photos that I'll blog about in my next post. And I went to Brighton City Art Gallery as there's always something interesting on there. This time there was a Jeff Koons Artist's Room. I'm always interested to see what Koons does, and I have enjoyed some of his more in-your-face art jokes in the past. I loved his colouring-book inspired piece outside the Royal Academy last year. But his meticulous reproductions in bronze of plastic inflatables leave me a little bit cold, though, and that was the centrepiece of this small show. 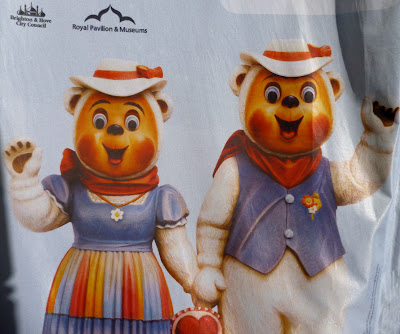 Also at the city art gallery was a beautiful selection of works from their collection by women. 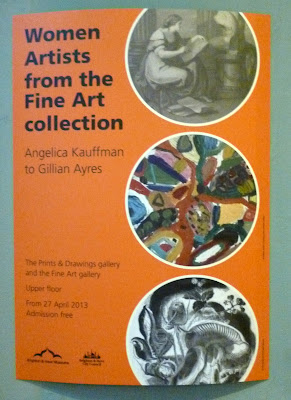 I specially liked Averil and Veronica Burleigh. Veronica was Averil's daughter and both painted in the first half of the twentieth century. Averil's Washerwomen from 1930 is lovely (the washerwomen were probably modelled by Veronica and other members of the family, apparently), but I adore Veronica's 1937 painting, Self-portrait with the Artist's Parents. Veronica looks so strong and newfangled in those sunglasses.
She definitely seems to be saying that she belongs to a new generation of artists.

I can well understand the fascination, Jane. It makes me think of those letters one sees in local papers asking for information about families who previously lived on certain areas or attended long closed schools. Isn't it frustrating that one can never fill in the blanks - we have mysteries like that on our own family tree. I wonder who has Henry's photos. I love the Veronica Burleigh paintings - so much of their time

Ok, I'll call you crazy... but I recognise that urge so well. I know that feeling when you just have to follow an idea no matter how much time or effort it takes. It's like picking a thread to make it unravel and the outcomes of your searches are fascinating.