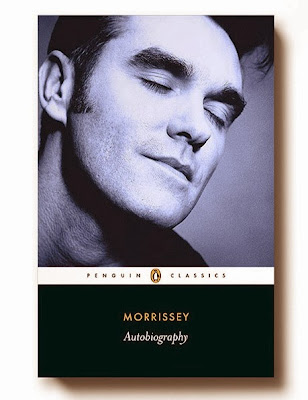 With Morrissey's autobiography high in the bestseller lists, I can't help looking back wistfully to 1987 when I was working as an editor at Bloomsbury. Keen to make my mark, I would fire off letters to all sorts of people, expressing my (genuine) interest in commissioning them to write a book. One such person was Morrissey. I have a copy of the letter I wrote to him -- it's too embarrassing in its plangent sincerity to reproduce here. I described the book I had in mind for him to write: 'Nothing so linear as an autobiography', something which would draw on his 'influences and obsessions'.
Almost by return of post I received an A4 envelope emblazoned with animal-welfare stickers: 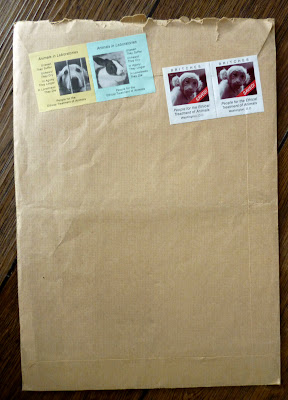 Inside was a large photocopy of the arm-wrestling scene from The Family Way, a 1966 British film starring Hayley Mills and Hywel Bennett (with an original score by Paul McCartney): 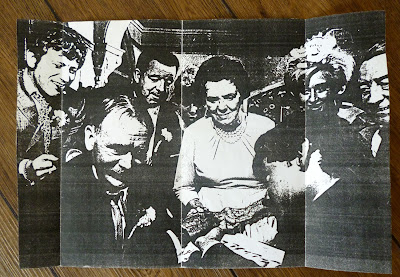 On the back was a wonderful note from Morrissey, written in his beautiful handwriting and with a drawing at the end.
Even better, he professed himself keen on the idea I'd proposed and wanted to meet up. Here's where it all goes a bit blurry, 26 years on. I know I went to meet him somewhere -- I think it was in a very smart Chelsea hotel, but I didn't actually get to meet him. Did he cancel at the last minute or just stand me up? -- I don't recall. Nothing ever came of the book, anyway, and the world has had to wait until 2013 for Morrissey to bring forth 480 pages of his life.
This whole business of trying to coax famous people into writing books turned out to be a vale of tears, culminating in the utter humiliation of attending a recording of French and Saunders' show (with their agent) and seeing them do a sketch based on the meeting I'd had with them a couple of days earlier, when I'd tried to persuade them that doing a Christmas stocking filler book wouldn't be too onerous (let's not even mention the huge amount of money that was on offer). My fairly straight explanation that a 64-page book with lots of pictures in it wouldn't take too long to write was turned into a toe-curlingly twee speech about how the book would fit into a matchbox and take three seconds to put together (I'm paraphrasing). It was a very weird sketch, possibly born out of a need to fill thirty minutes of the show with material, some of which was put together at the last minute. Perhaps, if you're a fan, you'll remember it. I'll never forget it! Needless to say, I didn't get to publish their book either.
I treasure my letter from Morrissey and have been showing it to my daughter's friends only this week, as they are now second-generation Morrissey fans. They were nice enough to make excited noises.
Posted by Jane Housham at 20:17

You always have such fascinating things to write about - and this is brilliant! I would make excited noises too if I was shown that wonderful response from Morrissey.

I will have to search youtube for the F&S sketch - it sounds very funny, but not if you're the subject of the ridicule!

Oh, I am sorry, but think that Morrissey is such a natural born twat, that I just cannot take him seriously, let alone read his autobiography.

I love your story. I have a love/hate fan relationship with Morrissey. I think his music is heavenly but I would never want to meet him. And there is no chance of that since he doesn't come to Canada...

O.k. here are my very excited noises Whoowhowooohooo you got an hand written letter of Morrissey, that is great, that it doesn't turn out like you hoped is a pitty, but maybe he didn't have enough to say back then.
I was a hugh The Smith fan.
Barbara Bee

Jane,
I've never quite 'got' Morrissey if I'm honest, maybe because he was not of my generation. What I do find fascinating is your ability to spot an opportunity all that time ago that has finally come to pass. Just shows how good you must have been at the job despite what F&S might think!

I know next to nothing about modern music -I'm not even sure how that happened. Now I know a little more about Morrissey. He does indeed have interesting handwriting (I'd like it to be interpreted, especially that shameless selfie)'. And you must be a very good editor to have spotted the potential so early on.

I was amused by your post on Morrissey, I am sure the letter will be worth a fortune in years to come. I have watched his rise to fame with a mixture of admiration and incredulity, remembering the shy, awkward teenager before he became famous.( I married one of his many cousins ).