Bum, indeed, the summer is nearly over and even though I have been at work, as normal, through most of it, I've still got that deep-rooted 'back to school' feeling. It's intensified, of course, by my kids actually having to go back to school and there have been new blazers and bags and shoes to buy. Going back to school feeling spruced up and in some sense renewed is important, I think.
I haven't been blogging over the summer, which I very much regret, but my Photoshop expired and without Photoshop I was stymied: no piccies, no blog. Now I've got Photoshop again and all is well. So here's a quick catch-up of what I've done of late.
Way back at the end of July we made a pilgrimage to Wolverhampton to see the Pauline Boty exhibition at Wolverhampton Art Gallery. It's still on, until 16 November 2013, and is really worth a visit. There are very few female Pop artists, largely because of the sexist state of affairs in art schools and on the art scene generally in the 50s and 60s. Pauline Boty went to Wimbledon College of Art and then went on to the Royal College of Art to specialise in stained glass. She was there from 1958-61 and got to know Peter Blake and David Hockney, among other artists. The interplay of influence is particularly strong with Peter Blake. She was beautiful and iconoclastic and probably would have had a career as an actress or television star if she hadn't died of cancer at the age of 28. She refused treatment as she was pregnant and didn't want to harm her child. I love her paintings which are so sexy and joyful, full of portraits of her idols -- Monroe, Jean-Paul Belmondo, Elvis -- through which she seems to connect herself to them. Bum, above, was her last painting, commissioned as part of the stage set for Oh Calcutta!. More on her here.
Wolverhampton Art Gallery was a great place with an excellent contemporary collection including a fantastic set of paintings of America by Lisa Milroy. There was also a really good touring show of Ron Mueck sculptures which is also on until the beginning of November (last day Nov 2nd).
While we were up in the West Midlands we took the opportunity to see Hamlet at the RSC in Stratford, with Jonathan Slinger as Hamlet. It was riveting. I last had anything to do with Hamlet when I did it for O level decades ago, but apart from the incredibly famous lines that crop up all the time, the whole play seemed lodged in my memory, so my teacher must have done a good job at the time. I enjoyed it very much. When we got back from the theatre to our hotel nearby there was trouble. We'd got ourselves two interconnecting rooms (for four of us) and on the way out my hubby had been extra vigilant and put the chain on the inside of one of the doors before exiting through the other one. Unfortunately, when we came back we opened one of the interconnecting doors to go back through to the other room and it caused a vacuum effect which sucked the corresponding door in the other room shut. There's only a handle on the room side of each of these facing doors, so there was now no way to enter the second room. D had to go down and confess what had happened and a chap came up to help. His only idea was to try to shoulder the interconnecting door open but he couldn't budge it. Then a supervising woman arrived, rather cross, and she managed (quite easily) to hook the chain off the door from the outside (which doesn't say a whole lot for their usefulness as a security device) and we got back in. We heard her outside the door saying, 'Why couldn't you have done that, Nathan?' and then huffing about 'stupid kids', whereas in fact they were innocent and only suffering the embarrassment of their Dad getting them locked out of their room.
A few days after this escapade we set off again, this time just me and the kids, down to St Ives. D had to stay behind to oversee our unending (and behind-schedule) building work. I was daunted by the 300-mile drive down to Cornwall so we broke the journey at Stonehenge. We decided not to go and see the stones themselves, having read sad reports that suggested you're just as well off having a good look from the road as you drive past. Instead we holed up in a nice new chain hotel at the services and spent the rest of the day doing collages. This was almost the best day of the whole summer for me. I really enjoyed sitting with my kids cutting and tearing up the bag of mags I'd brought and sticking the bits down. I promised not to go into which of us did what, but our efforts are below. One of us did two. I was interested to see that two of us picked out the same foxy (and used it similarly). Doing this made me very happy -- but they got bored before I did (and made me hurry up -- I would have gone on for hours, given the chance). 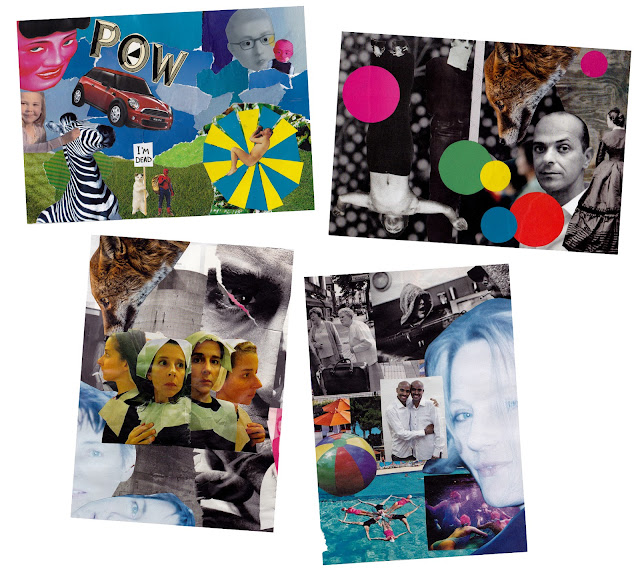 It was almost worthy of the epithet 'Ballardian' to be spending the night at a services, and lord knows I've been waiting for anything in my life to be remotely 'Ballardian' for long enough (it probably isn't something one should hope for) but I enjoyed the mild strangeness of it. The next day saw us back in the unending stream of traffic heading for England's furthest corner, but with a pleasing sense of having stolen a march on at least some of the cars. In St Ives we had rented a house right at the top of the steepest hill in town, just near the Leach Pottery, which I'm afraid we didn't visit because I didn't think the kids would enjoy it and it's a bit dry for me too, to be honest. Walking back up that hill most days nearly killed me but made me feel damned virtuous. And I didn't eat an ice cream all week, even though the kids were almost fainting with pleasure at jaffa-cake ice cream and all the rest. 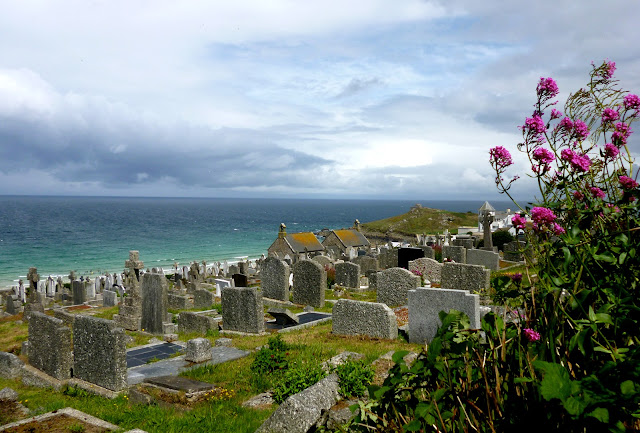 You could walk down to the sea through the most beautiful cemetery I know, on Barnoon Hill, where Alfred Wallis is buried in a grave made by Bernard Leach that always reminds me of a biscuit tin. 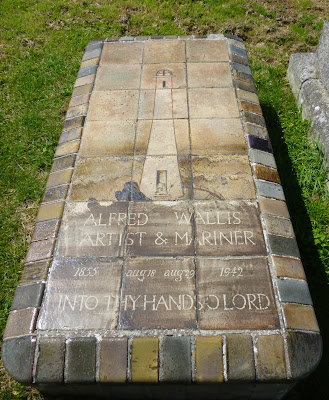 I wouldn't mind being in a biscuit tin if I could spend eternity here. 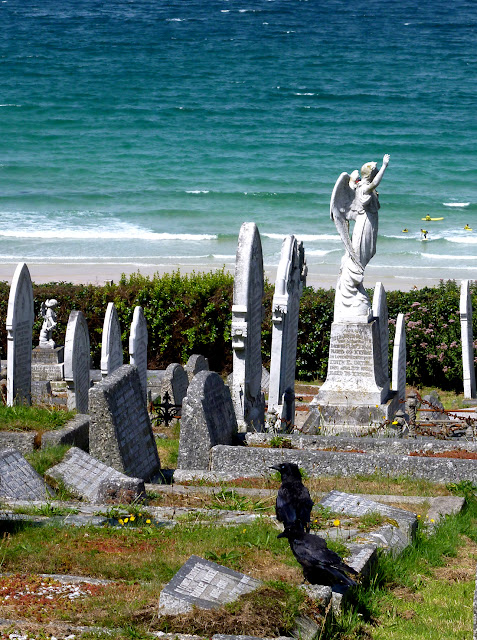 We had a nice walk along the cliffs at Lamorna and we went to the fabulous beach at Gwithian Towan a couple of times. There wasn't much on at Tate St Ives but we went anyway. We had fantastic scones steaming hot straight from the oven at the Tea Room, right on the harbour front and a very delicious evening meal at Black Rock -- I would certainly recommend it (maybe not for small children as quite sophisticated menu, but not at all formal). 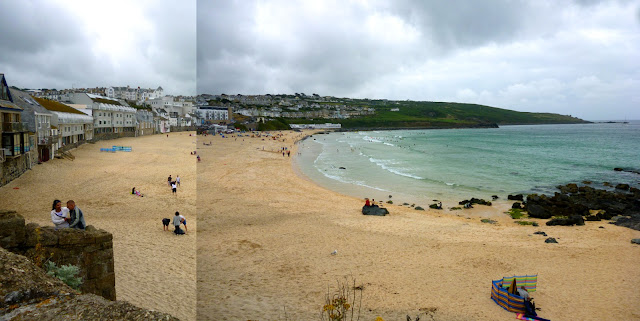 Even though I've been to St Ives four or five times before I realised I'd never been on the Island before (the little rocky headland at the heart of the town -- photos no good, so not shown) so we had a good rake around there.

And on the jetty as well. We even saw the seal that swims round the harbour (didn't get a photo) but I couldn't see whether it was the old one-eyed seal who we used to always see when Mum and I went to St Ives for Christmas a couple of times in the 80s. It was a little sad to be back in St Ives without Mum but it was good to be reminded of the times we had together there. In truth, the town at the height of summer now is completely different to how it used to be at Christmas almost three decades ago. I still had a laugh remembering how my Mum loved to say 'the Digey' and some of the other quaint St Ives street names in a cod Birmingham accent. 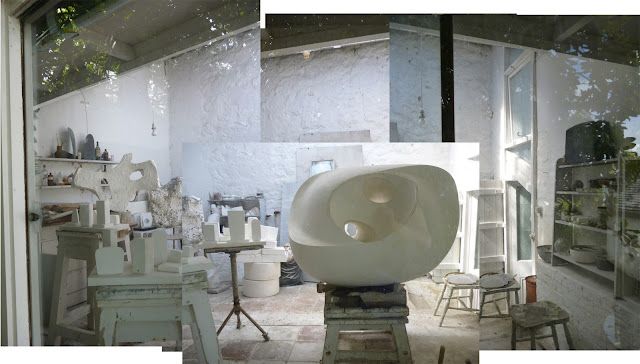 Some things don't change. Barbara Hepworth's studio was still exactly the same, with the same four coats hanging on the back of the door (not visible in my pic). They've made it into more of a destination now, with a proper entrance (at least I don't remember that from before) but it was still beautiful to be in her creative space.
Since we came back from St Ives, we've just had a couple of days out in London: RA Summer Exhibition (very stimulating and inspiring, as ever), Laura Knight and the BP Portrait Award at the National Portrait Gallery (I must see Summer in February about Laura Knight and Alfred Munnings but I think it will have to be a DVD now. The book the film is based on is a lovely read -- recommended if you love art and Cornwall). Paper at the Saatchi Gallery is the best thing I've ever seen at Saatchi (on till 3 November 2013), even if I am firmly on 'Team Nigella'.
Also at the Saatchi Gallery was a small survey of contemporary British art and a show sponsored by Hugo Boss which had an amazing interactive work. You projected your own shadow onto the wall and then falling (digital) marks that fell constantly down the wall filled in any little bowl-like spaces that your shadow made -- and you could throw the marks up in a shower as well. It was beautiful. 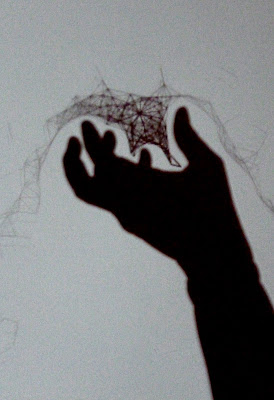 I had the best time in Selfridges with my daughter when we 'dared' to go onto the designer floor and actually look at the posh clothes. As I habitually look like an extra from Worzel Gummidge, it's a wonder we weren't thrown out, but I expect they thought I was some sort of minder for the beautiful model who was with me. We (well, she) had a treat of a fro-yo from the Pinkberry shop in the Food Hall. I got a free taster of the salt caramel flavour frozen yogurt which was mindblowing. Here's what she got:
Finally we went to see What Maisie Knew at the Gate Cinema in Notting Hill Gate, which, it being a Tuesday night, was full of rather grumpy elderly people shouting out to other elderly people to be quiet during the adverts. The film was a very impactful interpretation of the Henry James novel (brilliant novel), set in contemporary New York, with Julianne Moore, Steve Coogan and gorgeous Alexander Skarsgård. Onata Aprile is fantastic as Maisie, passed from adult to adult and constantly told that she is loved until the words ring almost completely hollow.

Great to catch up on what you've been doing - really interesting as usual. The Pauline Boty exhibition looks like something I might need to investigate..

OK, brain now on overload trying to take all this in. Have to find out about Pauline Boty as she is new to me and I love that first picture! What a life story. Also fascinated by those pencil drawings by Manigaud. More to find out about. Where did you see them? I can't work out whether it was at the Saatchi Gallery or not. Finally, what stunning blue seas at St Ives. Have not been there for so many years but I want to see that cemetery now.How I wish I could have sneaked into that suitcase and enjoyed all this myself.