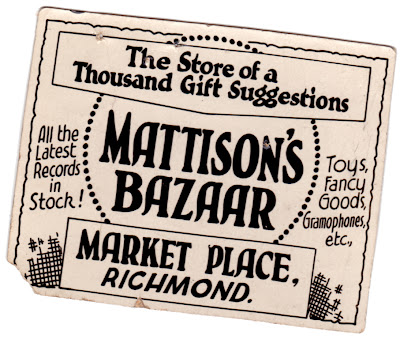 All the genealogical research I've been doing recently has stemmed from a desire to write about my own family. The family history research is intended to provide a firm skeleton of dates and other facts on which to hang a more subjective view of a family. I've been sorting through all the letters and other ephemera that have come down to me, to sieve out anything of interest. The above is a small advert for my great grandparents' 'Bazaar' which was a mini department store they owned in the 1920s. As well as stocking fancy goods, they also ran a 'servants' registry' and a lending library and sold the metal goods that my great grandfather made in his tinsmith's workshop. 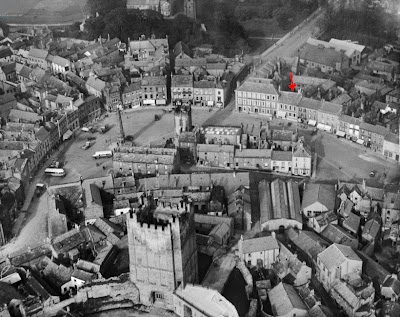 The shop was in the market place in Richmond, Yorkshire. I've marked it with an arrow in the photo above. It was next to the King's Head hotel and for that reason tends to crop up in photos, albeit quite often cut in half. The Bazaar was a precursor of shops like Woolworth's and in fact Woolworth's took the premises later. Later still, when Woolies was in its heyday and moved to an even bigger shop, the site was taken over by 'Mr Coleman & Mr Morris', a kind of one-off Poundland-style shop. Now it's a W.H. Smith's. 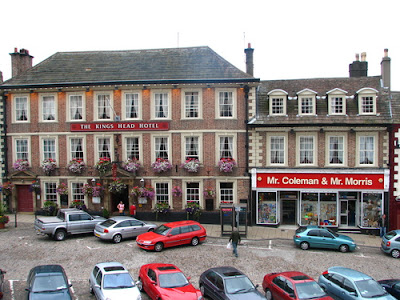 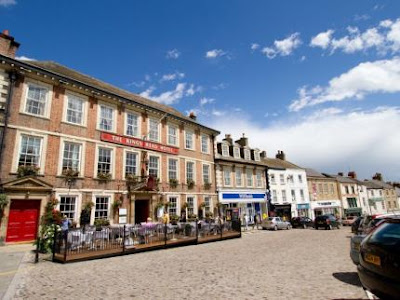 Among my old bits and pieces I found a receipt from the shop: 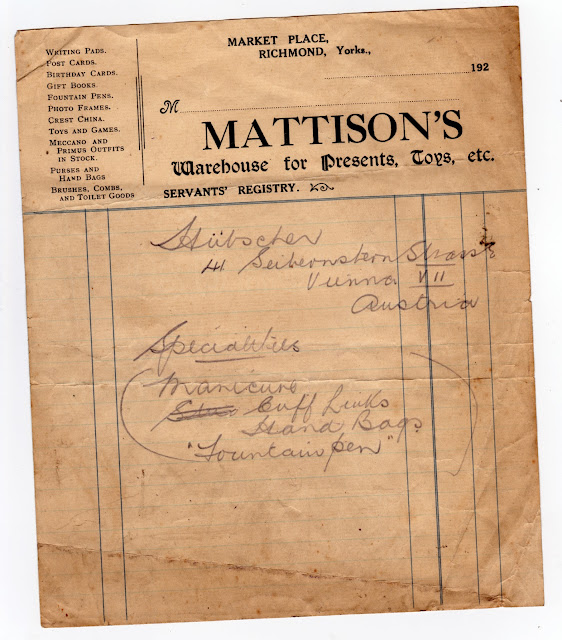 This sheet hasn't been used as a receipt but to jot down the name of a supplier: Hübscher of 41 Seibensternstrasse in Vienna. Their specialities are noted: manicure, cufflinks, handbags and fountain pens.
When I looked Hübscher up online I found an account of the company history.
This is the Hübscher & Co shop on a smart street in central Vienna:
The photo is from the website of Huebscher & Co, a 'prominent and successful international professional services consulting firm' and it's dated 1938 -- the year that Hitler's Germany annexed Austria. The website tells the story in some detail:
"Hübscher & Co., as the company was originally named, was created by Jewish brothers Jacob and Julius Hübscher. As the Nazis gained power before the start of World War II, Hitler annexed the Huebscher family's native Austria in March, 1938.
Jacob knew it would be dangerous to live as a Jewish business owner in occupied Austria, so two days after the German annexation, he proceeded to stand in line at the U.S. Embassy to register his wife and two sons for visa applications -- that turned out to be a key life-saving decision and action.
'My father knew what was in store for us,' said Jacob's son, Herbert Hübscher. Because he and his brother were born in Vienna, the boys received their visas first and left behind their parents -- to live with family members in America.
The boys arrived in New York on November 8, 1938, just one day before the Nazis undertook the most vicious action yet against the Jews. On November 9, 1938, the infamous Kristallnacht, also known as Night of the Broken Glass, took place.
On Kristallnacht, Nazi stormtroopers and civilians alike systematically pillaged, vandalized and burnt Jewish stores, homes and synagogues throughout Nazi Germany. Countless Jewish men were arrested and Jacob Hübscher was among them. The Nazis had already seized the Hübscher & Co. business, never to be returned to the brothers who successfully ran it for over a decade.
After several weeks of physical abuse Jacob was released from prison. He and his wife received their US visas the following year. World War II officially began on September 1, 1939 and the Hübschers were able to escape the Nazi regime only a month later, by fleeing to America.
'They barely got out,' said Herbert. For over a year, he waited in New York for his parents to arrive [...]
'It was a very difficult situation, we came with nothing,' said Herbert about the Huebschers' new life in America. 'My father did have a strong business education though.' With his business experience, Jacob was able to slowly build an accounting practice in New York. 'It was not easy,' Herbert recalls. 'But it was life-saving.'
For 60 years, the Hübscher family business name lay dormant. Today, Huebscher & Co. is [..] owned and operated by Eric Huebscher, son of Herbert Huebscher and grandson of original owner, Jacob Huebscher. 'The continued naming of our company is in tribute to my Grandfather, my Father and their entire family,' said Eric. The Hübscher name stands for strength, perseverance and old-fashioned hard work, just as it has for nearly 100 years."

I'm so glad to be able to connect back to my great grandparents through letters and other relics. I'm sure the Huebscher family feel just as strongly. My great grandfather knew a thing or two about 'old-fashioned hard work' too.

What a fascinating read.

Another example of the gems within our grasp if we just follow the threads of information and tie them up. What a wonderful story Jane,

Super read Jane, that one of your Great Grandfather in his workshop, the lad next to him was Les Fowler. I have a copy of that photo and a couple of others, one with his honey bear and the other on his bicycle with grinding tools. Your mother taught me English at school.

I can't reply to your comment by email as you're not signed up to Blogger, so I hope you see this. Thanks very much for your kind comment, and it's brilliant to have Les Fowler identified. Not many people seem to forget having been taught by my Mum, which is wonderful. Are you still in Richmond?

Hi Jane, I was born in Richmond but now live in Gilling West. As I said your mam taught me but we kept in touch, as well as my wife being a fellow artist we have an art shop in Richmond and occasionally I would take pastels down to your mother in Masion Dieu. One of my hobbies is saving old photo's and memorabilia of Richmond, it was a friend who sent me your blog link. I have a few copies of Spencer's Almanacks and one of Austin's and another of Bulmers. Non of them mention the Bazzar being there.

Jane, I have found a references of a George Roland Mattison 1879 and 1890 living at Castle cottage in Millgate, he was a mason builder.