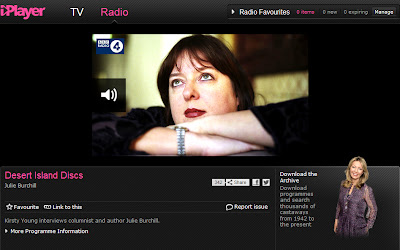 I've just listened to the last five minutes of Julie Burchill's Desert Island Discs which I missed yesterday as I had to tear myself away from the car radio and go in to work. All week I'd been picking up disapproving bluster and mocking laughter on Twitter and elsewhere about what she'd said and the music she'd chosen and I was looking forward to hearing it for myself.
I don't really care that she is outspoken and sometimes says things just to get a rise out of people, or doesn't stop to think before she mails her copy, I still love her. She embodies the sort of person I'd like to be but am too scared to be -- someone who does what they want to do and says what they want to say and puts honesty before everything else. Clearly this sort of manifesto causes problems, it isn't always the most social of paths, but I can't help but admire her for it.
In 1985 I crashed out of a Cambridge PhD which, if I'd stuck to it, might have got me an academic career (I had no idea that that was the case at the time -- I was sleepwalking into academia. I don't even remember applying for the PhD funding; I think the department must have applied on my behalf perhaps. And I didn't understand that by starting on my PhD in 'Dante's philosophy of language and the influence of the radical Aristotelian grammarians' I was entering a system. I didn't even go to the weekly faculty lunches -- not even once -- because they clashed with the meetings of the University Left, to which I was passionately attached.).
After a year of lonely research, I decided to leave beloved Cambridge, which in the end I loved more as a place to be than a place to study, and I looked, panicstricken, for a job. As a languages graduate with (not sure why not -- it was all part of the sleepwalking) no interest in working with languages, I didn't have much to offer. I applied for any job I thought I stood a chance of getting -- art gallery assistant, running the Stranglers fan club, magazine trainee. I got lucky with a job as an editorial assistant at Virgin Books. I attribute my success to the fact that, the night before the interview, I quickly learned the marks for proofreading and copyediting from the Artists' and Writers' Yearbook and, lo, my lifelong career in publishing was born, entirely randomly. 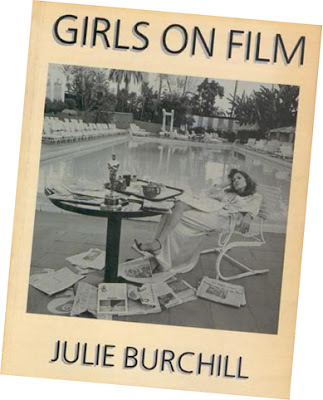 All this is coming round to say that one of the first books I worked on at Virgin was Julie Burchill's Girls on Film, published in March 1986. I really enjoyed helping to put this together, specially hunting down all the amazing photographs used to illustrate it. Terry O'Neill's photo of Faye Dunaway adorns the front cover, which was designed by my new flatmate Sue, who was the art director at Virgin Books. I've never forgotten my terror when I had to ring Julie Burchill to go through various corrections we wanted to make. It was the first time I'd had to deal directly with somebody famous -- I had been following Julie's journalism slavishly in the NME for years by then (the NME was the single most formative influence on my teenage life). I remember shaking as I dialled her number and being ineffably polite. Her tiny squeaky voice took me completely by surprise and she accepted all the suggested changes very meekly. I could be remembering this incorrectly but I think that the phonecall was possibly followed up swiftly by a cross letter retracting the changes. Like me, Julie didn't like direct confrontation. Anyway, I think it's a great book and it's quite often quoted in feminist film studies.
I've continued to like JB all through her career, whatever she's done. And when I heard that extraordinary voice on the radio yesterday it brought back that intense time in Notting Hill in the 1980s almost viscerally.
Posted by Jane Housham at 11:39

I too think that the world would be a poorer place with Julie Birchill, but - my god - what is this mad obsession with Israel and the Jews all about?!

(p.s. - please get rid of your word-verification thing!)

I meant WITHOUT her of course!

ooh, hob-nobbing with the rich and famous! Always a fan of strong willed women who provoke reactions in the rest of us who sleepwalk through life

I listened to the whole desert island thing, and couldn't believe how insensitive she is. It's ok to be outspoken, I am, but to trample all over other people's feelings is unforgivable. If you don't like someone, just walk away from them. I won't bother listening to her again.

Wow, what an interesting history you have! I really enjoyed reading about you, you rebel you ;)

I love Julie - or rather "Julie" the public persona, I've never met her and probably never will - she always makes me laugh, she's someone who just does and says what she likes. I love the way everyone takes her so seriously, while she's probably giggling her coked-up head off. And what's all this about the way she talks? I think she sounds great, I love that west country voice and think we should hear more of it! I thoroughly enjoyed that DID, was great to hear all those stories again.

Couldn't agree more, Jane. I love Julie. That fearlessness, openness and complete honesty is such a rare combination ... she rocks!

Couldn't agree more, Jane. I love Julie. That fearlessness, openness and complete honesty is such a rare combination ... she rocks!

I keep missing Desert Island Discs for some reason so must try to catch up with this on the dreaded i player. (dreaded for its slow speed here)As ever JB seems to attract controversy in everyone but I'll reserve judgement until I hear it. I'm more interested in your academic career and sorry you didn't get that job in the Stranglers fan club!

I'm very interested in Julie Burchill, and there's a lot to admire about her, not that she would give a toss. I listened to the programme twice and would really have liked to know what Kirsty made of it all.