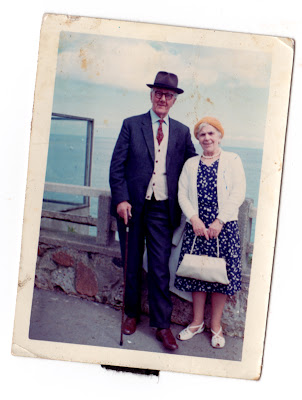 Last Monday I was in the big fleamarket in Brighton, going through some boxes crammed with old photographs. I was looking for photos with something special or cute about them, a young couple kissing, perhaps, or an adorable child with a dog. It was clear that someone -- or more likely lots of people -- had already been through them before me, stripping out all the 'good' photos. What was left were mostly boring shots, people with their heads cut off, shadowy sitting rooms, bland landscapes. But I kept on looking through them.
All the time I was sorting through them (my husband had gone off with the kids for an hour), I was wondering how these photos came to be thrown in a box, uncherished, disowned. I suppose people die and either their relatives don't want their photos or don't think to save them when their houses are cleared. That would be one of the saddest things that could happen after my death. I always tell myself that my photo albums are the things I'd try to save if disaster struck. I now have family photos going back to the 1890s and they're very precious to me.
So I bought a few photos for a few pence each and brought them home. 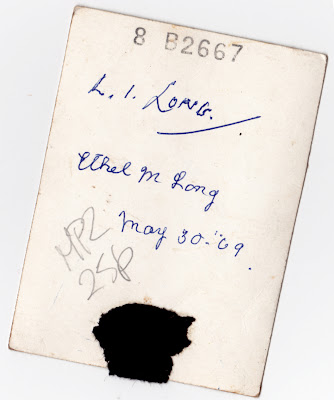 This is the back of the photo at the top of the post. It's been torn out of an album, having been taken on 30th May 1969. I don't know where the couple were posing or who took the shot, although it looks like an old person's handwriting -- actually two people's, as the two names are written in different styles. And very formally, too, with middle initials included. Perhaps they each signed their own names before giving the photo to a new acquaintance?

They are Mr Lionel Ivan Long and his wife Ethel Maud.
Lionel was born on 21st January 1896 near Checkendon, Henley-on-Thames, Oxfordshire. His mother was Ellen Sabina Long, nee Dare, born 1855 in Toller Porcorum, a beautiful little village in Dorset whose name means 'Toller [the local river] of the pigs'. His father was Arthur Long, born in Bristol in 1860 and a gardener at Wyfold Court near Checkendon. The family lived in Wyfold Cottage, in the grounds of the big house. 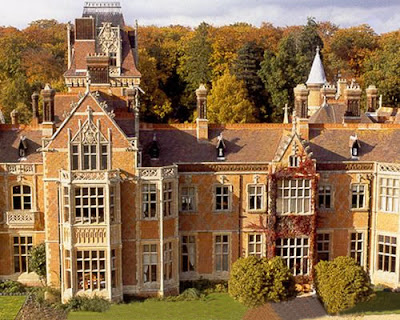 Wyfold Court was an incredible example of Victorian Gothic built for Robert Trotter Hermon-Hodge, 1st Baron Wyfold, a Tory MP and freemason, between 1872 and 1876. By 1911 Lionel's father was Head Gardener, almost certainly at Wyfold Court. But by 1930 the house had been turned into Borocourt Hospital, a mental asylum which was later the subject of an undercover television documentary which alleged appalling treatment of patients there. It was eventually closed down and subsequently converted into upmarket apartments in the 1990s.
By 1911, Arthur and Ellen and their three sons, William, Frank and Lionel, had moved to Sonning Common, not far from Wyfold. Now aged 15, Lionel was working as a grocer's assistant.
In Spring 1926 Lionel married Ethel Westrope. Ethel was born in the ancient town of Ashwell in Hertfordshire, not far from where I now live. Her father, William Montfort Westrope, was a farmer from Steeple Morden, very close to Ashwell. The family lived in various small towns and villages in Cambridgeshire and after Lionel died in 1974, Ethel spent the rest of her days in Cambridge. She died in 1995, aged 96.
These are just a few scraps of information gleaned from publicly available records. But I like the idea of bringing lost photographs to life and I almost begin to imagine that I knew Lionel and Ethel, just a little.

Oh wow. Wonderful photograph and I love that you've already found out so much about Lionel and Ethel. I am always sad about photos just thrown in a box in charity shops etc, and have rehomed many (!). To be able to give them a bit of their history (and not an imagined one, as I usually do) is brilliant.

How kind of you to look them up. My grandmother's name was Ethel and the two have very similar histories, in two different countries.

That is so interesting, and almost amazing that you can find that all out. I live very close to Ashwell so am wondering if I rub shoulders with their descendents. How did you go about finding it all out? and what are you going to do with the photo?

I have to agree that you have done a great bit of research. My grandmother's maiden name was Long, so it made me perk up my ears. Not an uncommon name in East Anglia, who knows?
Your findings seems ripe for a bit of a story. Are you going to launch them into the future?

Snap ! I got my mums old photos out this week and I have done a blog page for tomorrow
Lynn

You've been on that 'trace the ancestors 'website again haven't you... but for such a lovely reason. Fleshing out the life stories behind the photo really does give them a history we can relate too. It is sad that they were in a box but you've given Lionel and Ethel back a bit of respect and look how fascinating just one photograph has proven to be.