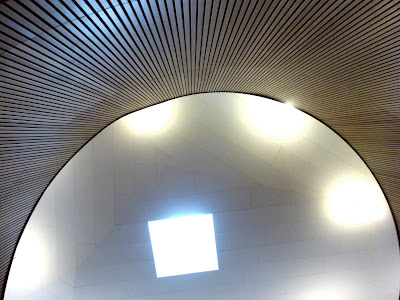 I was really looking forward to my visit to London to see the sketchbooks on tour with the Brooklyn Sketchbook Project. In the event, it wasn't as satisfying as I'd hoped -- I don't want to come down too hard on the Project because I love the spirit of it as it comes across on their website, but in the flesh it didn't seem to work quite as well.
I liked the Canada Water Library building, where the sketchbooks were on display. It felt as though the curving staircase might lead to heaven: 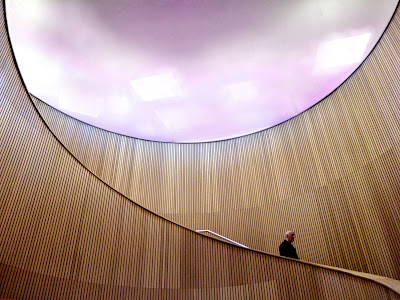 Lots of people arrived, as I did, shortly after the library opened at 11am, but the Sketchbook Project people weren't expecting to get started until 1pm. They very kindly let us go in and they handed out some handfuls of sketchbooks for us to look at whilst they got their systems up and running. This turned out to be the best bit of the experience, because all one wants to do is leaf through the sketchbooks more or less indiscriminately, enjoying the strong sense of connection to the sketchbook-creator that you get from holding their work in your hands. Some of the sketchbooks were lovely. I felt that the ones that developed a coherent idea worked best. 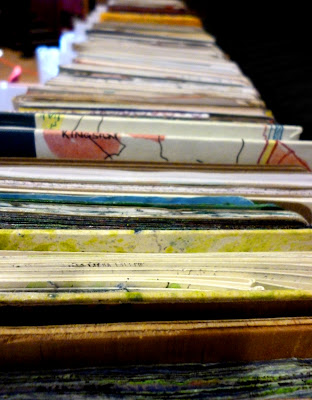 Then, after a while, the Project people gathered up all these loose sketchbooks and took them back behind their desk. We now had to queue up at one laptop to register for a library card and then move along to another laptop to get access to a particular sketchbook. This didn't work for me. First of all I thought I'd get my own sketchbook out, just to check that it was holding up (it has some loose elements in a little bag inside) and also, more importantly really, to 'reconnect' with it. I spent so much time on it and put a lot of personal stuff into it, and it was quite hard parting with it last year. Alas, my book couldn't be found and didn't come up on their search system. I was very sad about this, perhaps out of proportion to the actuality. I felt my book and its emotional content were adrift, lost. I had to try to get over that feeling quickly as it was disproportionate to the actual situation. I ordered up a different sketchbook to look at but they never called me up to get it. The system of ordering up a book to look at just didn't work in my view -- surely most people don't want to look at specific books but just to peruse as many different books as possible. There were thousands of books neatly shelved behind the desk, but you couldn't get at them. No wonder my book has only been looked at three times -- it's like a lucky dip where the prizes are grains of rice. I confess I got quite down while I was there -- there was such a strong contrast between the lovely promise of all those sketchbooks and the arid reality of queuing to ask to see just one random book at a time (or I think you could ask to see two at a time but I didn't see any!). 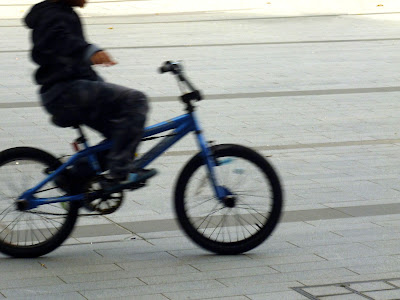 I went out of the library and felt better immediately. Kids were whizzing round on their bikes outside. I decided to go to the Barbican to see the photography exhibition. It showcases the work of twelve photographers who were working in the Sixties and Seventies. I liked William Eggleston's work the best. 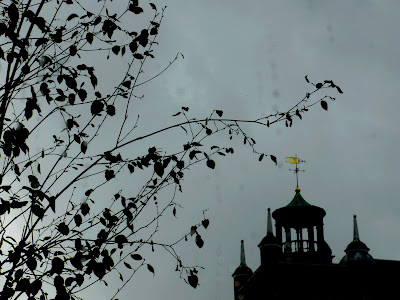 While I was chawing through a bagel down in the Barbican foodhall, the skies darkened and it began to rain. The beautiful lights in the foodhall shone out. 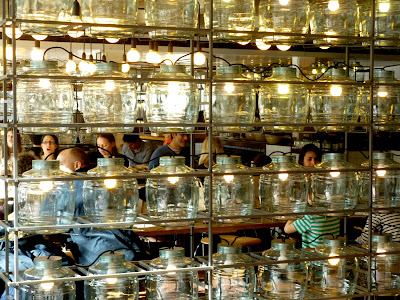 Then I rushed to the ICA to see The Queen of Versailles, spotting a man taking a stroll along a crane on the way: 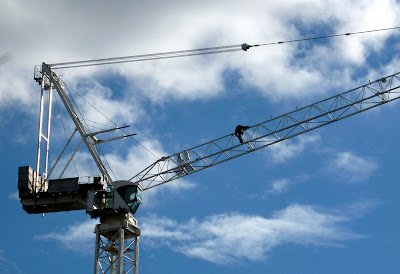 I recommend the film, a documentary about David and Jackie Siegel, multimillionaires in Florida who were building the biggest house in America when the 2008 crash pulled them up short. As a study of the emptiness of wealth, it was fascinating -- the scene where the family opened their Christmas presents was very saddening, not to mention the fate of the family's pet lizard.
All in all, it wasn't the best day I've had in London (it didn't help that about a third of the entire Tube system was closed) but, as always, I tried to get as much out of it as possible. I like this rather Richter-like photo that I got by accident: 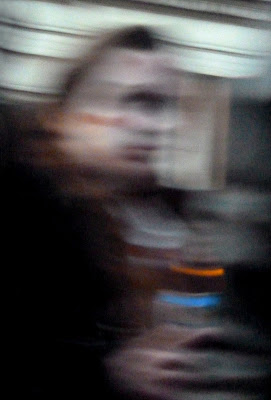 It was a day full of circles: 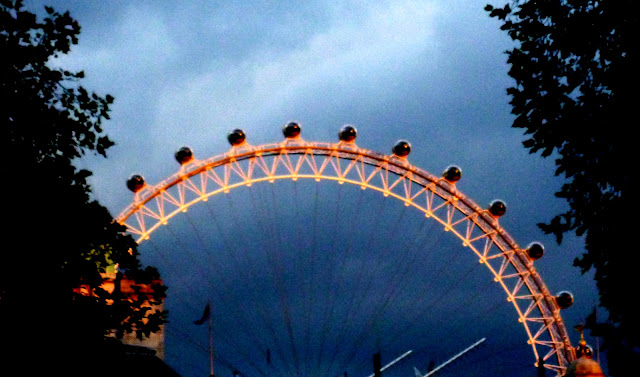 Then it was time to draw a line under the day, catch the Tube and head home. 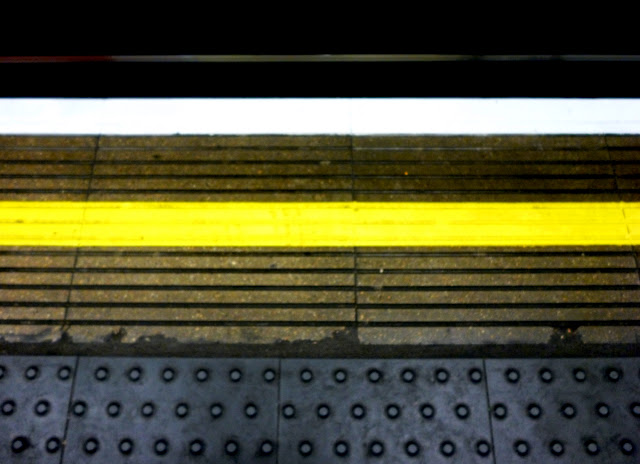 I am most upset and annoyed on your behalf that your sketchbook couldn't be found. Hard to take that lightly when it contains so much of you and your thoughts. (hugs)

Joanna has summed up my feelings perfectly!

Hmmmmm, how disappointing :( I was going to go yesterday but what with one thing or another I didn't go - I'm almost glad I didn't make the effort. The booking out system sounds most unsatisfactory. I wonder if you'll get the chance to leave some feedback about your experience.

I'm also disappointed your sketchbook has only had 3 views - it's such a wonderful book. But considering what you've experienced, it's not much of a surprise.

Great photos of your day, though!

My heart bleeds for you re the "viewing" experience. Not at all what one would hope for. I felt miserable on your behalf Jane.

However, I cannot help but comment on what a beautifully put together post this is with its juxtaposition of photos and the final one which underlined your day and this post made me smile.

I'm disappointed and frustrated on behalf of you and all the people I know that took part in the project - I wondered why so few views were gotten on such beautiful books. What a daft way to do it :( It doesn't really encourage participation does it? :(

Oh no, that's awful! I think you had every right to be upset. Like everyone else, I'm upset for you. And cross too. You should definitely tell the organisers about your experience. They need to learn how to make the project better. I imagine they're just trying to take good care of them, but if nobody gets to see them, then what's the point?

I'm bowled over by everyone's kindness in these comments. Thank you so much for the support. Really. In fact I feel a bit bad because when I checked my emails yesterday I had two messages saying that my book had been looked at -- so it must have been there in London but not directly trackable for some reason. People must have been given it randomly, I guess. But I feel better -- and also as though I overreacted a bit on Saturday!

So sorry you didn't get to see your book. I was there on Friday when it opened and I must admit, while it was fun, it was a bit of an anti-climax( no big crowds, publicity or sense of occasion).I managed to crash the computer and my daughter kept getting very odd and dull books. I felt panicked and forgot all the people whose books I'd wanted to view! We did see some good ones though,but I'm sad my book has only had 3 views in London so far...and one was my mum!

@Witchmountain. Hi, I just wanted to say thanks for your comment as I can't reply to you by email (settings issue). It just wasn't quite right, was it? What a shame. We all just want as many people as possible to see our books.

Is it ok if I put a link to you in the blog post I'm writing? I feel mean being negative about it too as its such a lovely idea but yes, there are things that could have improved it. Still loved taking part...haven't decided whether to do this years...

Hi Jane
Here is some good news... I picked out Kim Tillyer's book which I had on my "To read list" and your book was the one next to it so I was privileged to see it. Also Sally MacCabe who also has a book in was with me so she saw it too.
We were absolutely in awe of it, you have put your heart and soul into it. I took a couple of pics and will be showing it on my blog.
I agree with what you say about the whole set up though. I'm going to put a link to your blog and Kim's when I write my own. It's such a shame we all feel deflated. How you can bear to part with your book though I don't know. So glad I got to see it.
Lynn x

What a deflating experience but the previous comment would seem to suggest your beautiful book is there for people to see. I remember how moving I felt it was when you posted it orginally. Onwards and upwards Jane. Thanks for the circles photos. I've been obsessed with the shape recently and just loved them.

Oh my god Jane... its all clicking into place! I'm such a twit. I was at the project with Lynn on Monday and of course I DID see your book (though it wouldn't be officially logged out cos we were doing 'shares' with the books we booked out and I had to do all the ones submitted by my family). Your book was a m a z i n g. I am in awe of artists who are able to open their hearts and souls in such a public way. Your book will stay with me forever... I too found the system frustrating - I'd had this vision of being able to sit on the floor and just grab books at random, flicking through and savouring the whole spirit of the project which I think is wonderful. Having said that, having done it for 2 years I won't be doing it again. I have to devote all my time to my own work now. Keep in touch. x

First time I commented in a blog! I really enjoy it. You have an awesome post. Please do more articles like this. I'm gonna come back surely. God bless.