I headed back into London again yesterday, to visit Frieze -- this time with the rest of the family, which made me much less prone to introspection (after my rather miserable post about my visit to the Sketchbook Project on Saturday, I felt guilty when, later, I found two email messages saying my book had been viewed -- I think these must have been when it was randomly picked off the shelves by the staff as it wasn't searchable. So at least it isn't lost, and I feel a bit pathetic for making such a fuss. Really grateful for the supportive messages from blogfriends -- thank you!). Now back to Frieze. 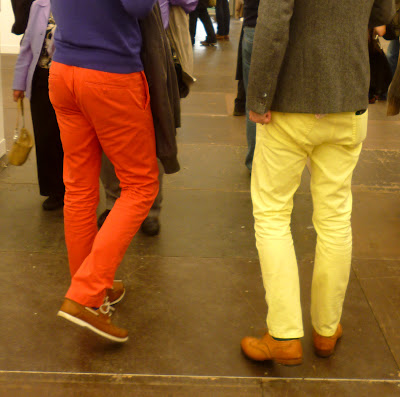 Frieze is a place where chaps can wear their colourful trousers without fear of ridicule. 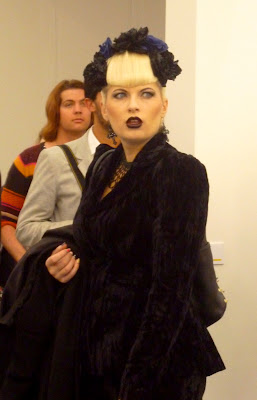 The people are as interesting to look at as the artworks, often more so. There is beauty, intensity... 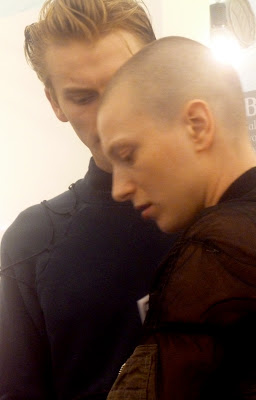 ...and the flash of golden shoes. 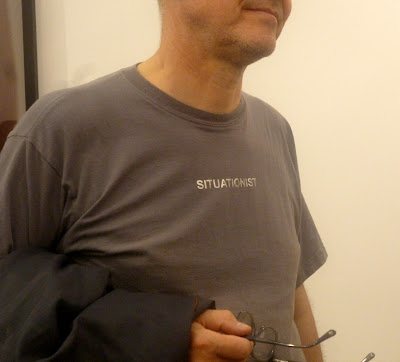 I was going to write that you can't be a Situationist if you've got it on your t-shirt. Or, rather, that wearing the name on your t-shirt doesn't quite match up to being a member of Pussy Riot or tearing up cobblestones in Paris in '68. But having found this further explanation of Situationism -- "any method of making one or more individuals critically analyze their everyday life, and to recognize and pursue their true desires in their lives. The experimental direction of Situationist activity consists of setting up temporary environments that are favorable to the fulfillment of such desires" -- I decided that perhaps Frieze is just such a 'situation' since it's a temporary environment that provokes an intense desire in me to pull my finger out and try harder to get somewhere with my art. It's very hard not to be envious of the whole world of international gallerists, of the girls with their iPads and coloured tights sitting in the booths, the few anointed objects chosen for display (one booth had nothing but small pebbles on show -- I'm sure it costs thousands to take a stand here), the feeling that they are tolerating the plebs being let in by studiously ignoring them. What I wouldn't give to have my art up in one of those booths one day -- but I think it's about as likely to happen as an art gallery being built on the moon. This isn't (just) sour grapes, I honestly think you have to be part of the system, which starts with the art schools. I will have to become an Outsider Artist, but I don't think I'm mad enough. Yet.
I haven't included photos of very much of the art, even though you're allowed to take photos there. I'm not sure of the copyright situation. There was a lot of stuff I admired -- new work by Wilhelm Sasnal, a return (it seemed) to figurative painting (I liked Latvian artist Janis Avotins' blurry figures very much and Maureen Gallace's cool roses, also Jonas Wood's slightly Hockney-like Californian interiors). 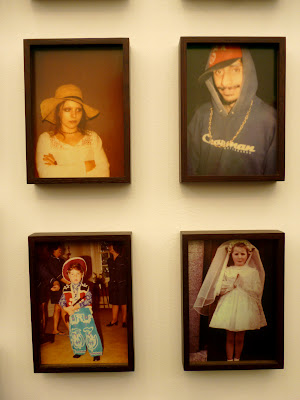 Zhang Huan's huge, exquisite work, 'Our Parents', was made using ash (on linen). I've included the photo of the two silly men posing in front of it to give a sense of the scale. 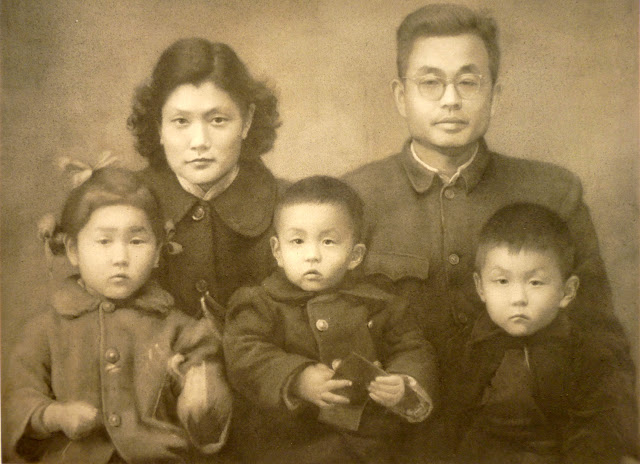 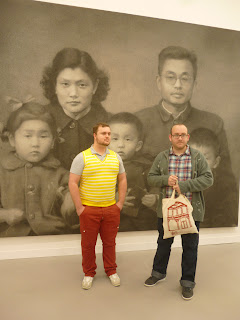 I really appreciate your posts on art. You see the silliness and irony ie about having to be part of the system in order to exhibit purportedly avant garde work.

The shelves of vases. Hello?!

And I love your humorous photos. The last one made me laff.Don't stop questioning. You're good enough, if not better. And you have beautiful children and a groovy house.xo

Your comments on your experiences at the Sketchbook Project were, and still are, valid. The fact that 2 people managed to look at your (wonderful) sketchbook was clearly by luck rather than judgement.

I loved reading about Frieze and enjoyed looking at the photos. 'Arty' people, I love 'em (and my inner Joanna wishes that I was more like them, with their confidence and wow-clothes).

As ever, your take on things is sharply observed and reported Jane. Love that photo of the two chaps and I hope you were all suitably attired to blend in with the 'in' crowd. As for not being mad enough.... yet.... are you sure? are you absolutely sure?

I've never been - I don't think I'd have the energy - so thank you very much for sharing your rather delicious observations.

The time is ripe for the suppressed-punk-revival.

I may have made that up.