Yes! Got the carrier bag.... and the mug... at the David Hockney exhibition 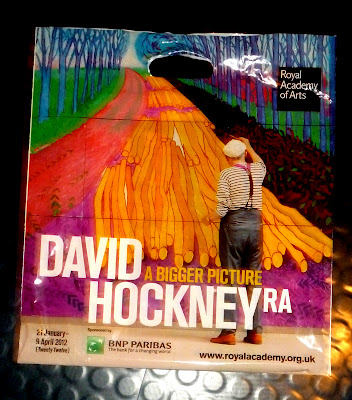 Today we've been to see the gorgeous, intoxicating David Hockney exhibition at the Royal Academy in London. Such is my terror of infringing DH's copyright that I only dare reproduce a photograph of the lovely carrier bag in which our inevitable souvenirs were borne home. In fact as we were walking around the exhibition itself we saw a diminutive guard throw herself in front of a naughty visitor who was about to sneak some footage of the bosky loveliness on his mobile phone -- she critically lengthened her arm by judicious flourishing of her spectacles case so that it blocked any possible misdemeanour by the phone's owner. We almost cheered her, even as we were wishing we could sneak one or two pictures ourselves (but did not, no sirree). 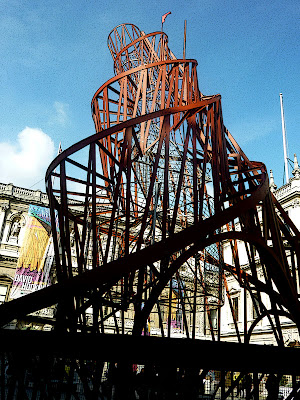 Well, I must start at the beginning and end at the end of this memorable day out, with the model of Tatlin's Tower that has been erected in the courtyard of the RA. How I love the tilting, sinuous lunacy of this Tower, which was supposed to dwarf the Eiffel Tower and celebrate the supremacy of the Third International (but, alas, was never built for real). The lower, inner cube was to rotate once a year, the next stage up once a month and the top bit once a day. Imagine how giddying that would have been. 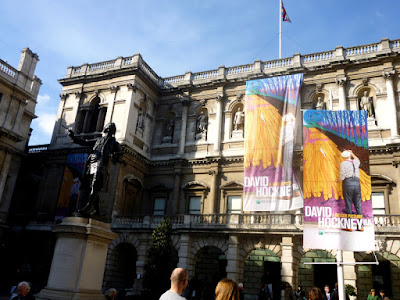 Also in the RA courtyard was Sir Joshua Reynolds flourishing his paintbrush alongside DH waving his. I'm not in the club that sneers at the Royal Academy -- I think it does a wonderful job of bonding our British artists together and giving them a sense of historical continuity and comradeship.
So, no pictures from inside the show, but it was absolutely beautiful and inspiring. The interconnecting rooms of the RA made for wonderful glimpses of the paintings at different distances, and they just seemed to get more and more intense the further away from them you were. It would be a cold heart indeed that didn't respond to the exuberance and sheer love of the landscape in these paintings. The wall of small single-canvas paintings of fields, roads and hills sang out with the joy of just being there. As for the paintings done on the iPad, they were almost unbearably lovely. I don't use that word lightly -- you just couldn't take in all the moments Hockney had recorded, the bursting greens, the mists, the puddles, the buds, the cold days and warm days. His work in East Yorkshire has been so prodigious, you wonder how he hasn't burst with all the visual data he has taken in and recorded.
In the room with the eighteen screens (which were like his multi-canvas paintings brought to life), the atmosphere was almost like a religious gathering -- reverent but pulsing with a shared joy. The screens were split into two sets of nine and each set showed one of a pair of corresponding films (split into nine simultaneously recorded fragments to make a whole) -- a lane in winter and spring, a hedgerow on two different dates. It was just an 'ordinary' English lane or hedgerow but somehow imbued with glory, just by being looked at so lovingly (by DH via the nine video cameras). A large crowd sat on the benches or stood gazing at the screens without talking. It was very peaceful.
So, finally, I think it will be safe to show you the mug of the show: 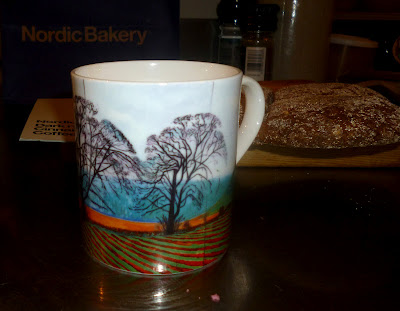 And in the background of the mug is some mighty rye bread bought this afternoon from the Nordic Bakery in Golden Square. Imagine if you will my intense pleasure at discovering that the bakery was open, after its being closed on the day when I first discovered it (it's next to the Frith St Gallery) on an earlier London trip. In we went, and there was even a table big enough for all four of us, me exclaiming over the lovely colour of the walls and the very Skandinavian mugs and the cakes and everything. I am currently obsessed with semlor, the Skandinavian Lent buns and I asked if they had them, but they didn't. However, while we were drinking our coffee and munching on our lingonberry buns, I spied a tray of semlor being brought out. You might imagine a vast tray with about 30 buns on it, but no, this tray had only three buns on it. Up I jumped, heart in mouth, and queued again. It was obviously my lucky day, as I was able to buy two of the (rather pricey) buns plus some rye bread. 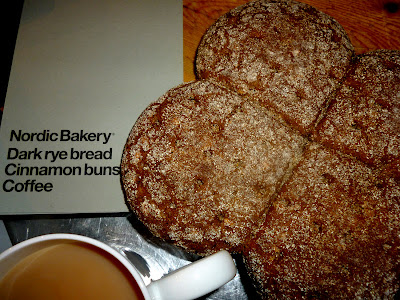 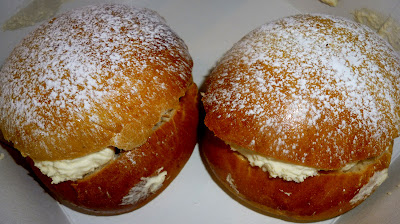 We've just eaten both the bread and the buns and they were absolutely wonderful. The bread in particular was so tasty and chewy, it was like ur-bread, almost mythically good. From what I can discover online, I think the Lent buns were a Finnish variation, with raspberry jam and cream instead of the almond paste and cream favoured in Sweden. They were lovely, anyway, and allowed me to indulge my Skandi-love for a few happy moments. 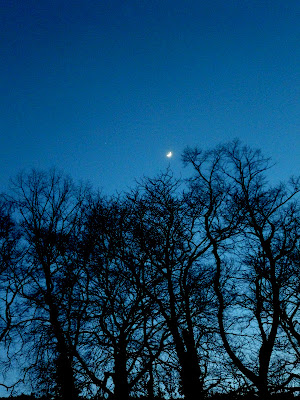 The trees outside the railway station on our return were very lovely. Do you think I have ingested something along with the buns to make this day seem so exceptional?
Posted by Jane Housham at 22:38

Now you see I haven't had breakfast yet, so where I should be gasping at the obvious glory of the Hockney's it's the semlor buns I'm eyeing up ;D Looks like you had a wonderful day :D

You have descibed the whole experience of the David Hockney show so much better than I did but that was exactly how I felt. It was so joyous. I loved it so much I'm going back this week.(And might have to check out that bakery!)

Sadly this post won't show me any of your photos Jane except for the carrier bag - must be a non broadband day down here - but I actually didn't need them as your words carried me along on the excitement you had for the whole trip. I have read countless blog versions of a visit to the DH exhibition, some with envy, but yours is the only one that genuinely made me think I should jump on a train and head east. I just love that you were 'intoxicated' by it. What a fab way to spend the weekend.

I went to the DH Exhibition when it was far too busy (half term) -and I got rather too hot and bothered to take it in properly. However, I did enjoy it enough to be going back again.

Your account has reminded to to sort it out sooner rather than later.

That's funny - I've just watched The Culture Show about the exhibition, and then I find your blog! It sounds like you had a wonderful time. I'd love to see the paintings in real life, and I liked the look of the the nine screen film very much.

I like the look of the bread too, mind...

The exhibition sounds wonderful. I too have just sat and watched The Culture Show and thoroughly enjoyed it. I also happen to be the owner of a brand new bread making machine and have been "Googling" semlor buns...... Oh my, I am going to be piling on the pounds!

I think it is rather rare, but when you have a strong emotional response to a work of art it really does seem to permeate everything that follows for a while. I felt a strong sense of joy after I had been to the Hockney that stayed with me all day long.

Going to the theatre in London on Friday evening,so will be queuing to get into the DH exhibition - your blogpost persuaded me that it must be worthwhile. Also now fixated on making semlor and been trawling for recipes! You have a lot to answer for...