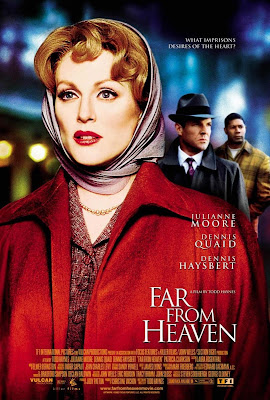 As well as my disturbingly large 'to be read' pile, by my bed, I also have a 'to be watched' pile of DVDs, about thirty or so, which I just never seem to get around to watching. Most of them have been bought on impulse, perhaps because I spotted them on the 'People who bought that also bought this...' strip on Amazon, which I find very tantalising. 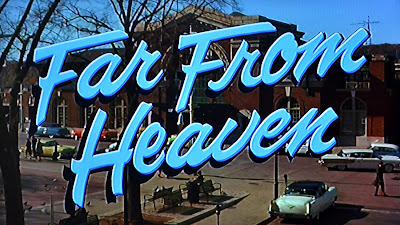 Anyhow, I've been at home today with a stinky cold and it was the perfect excuse to finally watch one of these neglected DVDs. Almost at random, I pulled out Todd Haynes' Far From Heaven and stuck it in the player. I no longer had any idea why I'd got it and the cover didn't particularly speak to me (something about that headscarf) ... BUT ... it was absolutely brilliant and suddenly I'm a massive Todd Haynes fan and have been looking at what else he's done and it's all starting to come together.
So, Far From Heaven. It's the most beautiful evocation of 1950s melodrama, in particular the films of Douglas Sirk, which, I now know, typically starred Jane Wyman and Rock Hudson and were about 'forbidden love' across the class divide.
Far From Heaven isn't a pastiche, it's an homage, with every detail lovingly crafted and thought through. In the short documentary about the film on the DVD, it shows Todd Haynes' 'mood book' for the film, a fantastic scrapbook of source images, colour combinations, hair styles, fashions, furniture and so on. The film is a midcentury marvel. Haynes made a swatch of colours for each scene, to guide the designer and costume designer:

Set in Hartford, Connecticut in 1957, it's the story of Kathy and Frank Whitaker, who are, to all appearances, the perfect American couple. He's an executive in a television sales company and she stays at home with her two lovely children and her black maid (Mad Men must surely have been heavily influenced by the look and feel of this film, which predates Mad Men, having been released in 2002. Another film influenced by it is, I think, Revolutionary Road, 2008). I'm absolutely not going to give away the plot because it depends on an element of surprise and is really engrossing. Julianne Moore and Dennis Quaid are perfect as this all-American couple who start to see cracks appearing in their dream existence. 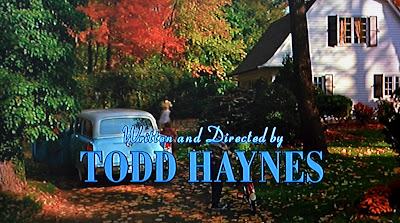 The aspect of the film that really makes it exceptional to me is Haynes' use of colour. The dark blues and greens which betoken troubles seem almost Expressionist in mood: 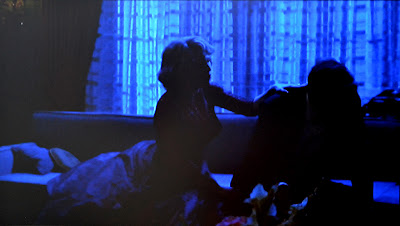 In the director's commentary, Haynes mentions the 'indigo gels' that he used to get the intense blue of the moonlit scenes, and he says that he had two separate shades, one for the autunm part of the film and another for when it was winter. The seasons are gorgeously evoked in this film.
The use of colour was most startling in the costumes, and I felt that Haynes had made the costumes chime so strongly with each other in order to push home the sense of absolute conformity in American society at that period. Here are Kathy Whitaker and her friends, no doubt all wearing 'this Fall's must-have shades': 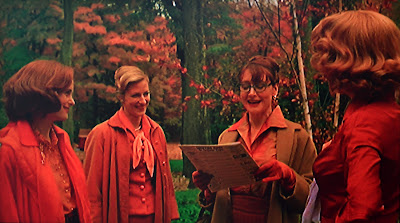 In the above shot, Kathy, on the right, is wearing a lilac scarf with her russet ensemble. It's the only note of colour that isn't red-brown. I think it symbolises the small element of non-conformity within her. Look, it's coming loose in the wind... 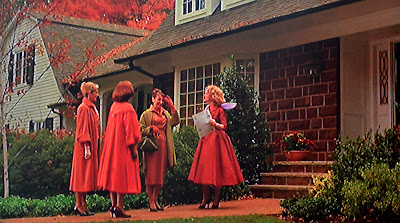 Oh, it's flying away!
But someone has found the scarf... 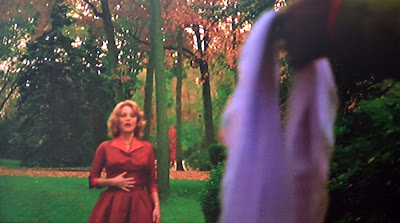 You've really got to watch this film! It's about forbidden love -- more than one sort -- and the viewer is asked to make a direct comparison between these different types of desire. 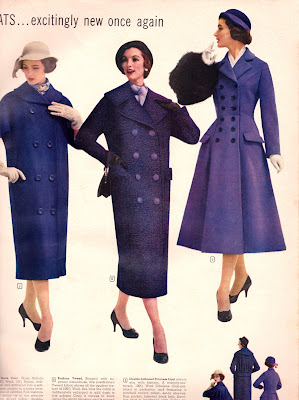 I have a Montgomery Ward catalogue for 1957 and you can see from almost any page of it that the film is perfectly in keeping with the fashion and conformist mood of the period -- look at all the coats for the new season perfectly chiming together.
Since 'discovering' Todd Haynes (about twenty years after everybody else), I've watched his first movie (made at film school), Superstar, in chunks on YouTube. It's a biopic of Karen Carpenter done with a variety of mixed media, but all the actors are played by Barbie and Ken dolls:
The dolls work well as sinisterly plastic counterparts to the 'real' Karen and Richard Carpenter and Barbie's insanely narrow form constantly reminds us of the impossible body image that Karen's anorexia drove her to try, hopelessly, to achieve. 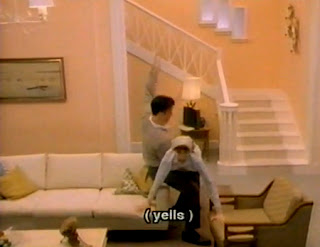 I also watched another Todd Haynes piece on YouTube -- Dottie Gets Spanked -- which was a 1993 made-for-TV short with, I suspect, strong autobiographical elements. It's not as naughty as it sounds. Dottie is a 1960's comedienne with strong debts to Lucille Ball. She has a raucous comedy show on TV, sponsored by Revlon, which six-year-old Stevie is crazy about. He sits right up to the black-and-white screen and draws picture after picture of Dottie with his wax crayons. The other children seem to sense that he is 'different' -- his two-tone shoes are the butt of the boys' jokes and the little girls disapprove of his trying to talk about Dottie with them. But when Stevie wins a contest to go to the TV studio in New York to meet Dottie his popularity suddenly increases exponentially. At the studio, Dottie is recording a sketch where she gets put over her husband's knee and the intensity of seeing this at first hand combines with other things glimpsed and understood as taboo to become the little boy's most powerful fantasy. His father disapproves of his love of Dottie and he wants Stevie to watch the football game with him. In his dream, little Stevie is King but he kills another child and is dethroned. The black-and-white dream sequences are pure Dr Caligari's Cabinet:
Stevie understands that his excitement at Dottie's spanking is taboo and he suppresses it, burying his drawing of the spanking scene in the garden. It's pure Freud and seems to go a long way towards explaining Haynes the sublimating artist.
Now I've ordered two other Haynes features from Amazon, Velvet Goldmine and [Safe], and no doubt these will be spending a couple of years on the 'to be watched' pile before I get round to them -- or perhaps they'll jump straight to the top. Todd Haynes is definitely my new favourite film director.
Posted by Jane Housham at 19:57

Email ThisBlogThis!Share to TwitterShare to FacebookShare to Pinterest
Labels: 1957, All That Heaven Allows, Far From Heaven, Montgomery Ward, Todd Haynes

I have to confess that I had never heard of Todd Haynes until reading this post, so thank you for making me realise the error of my ways! I will be looking out for "Far From Heaven", it looks superb.

I watched those Douglas Sirk films as a child and bought both the Rock Hudson/Jane Wyman ones for my Mum to watch again a few years ago. I love the one where he's a surgeon and the only one that can restore her sight...what a tearjerker.... so I think this might be right up my street, except, like you Jane I have a pile of unwatched dvd's languishing in the corner. I just watched Julia Roberts in 'Eat, Pray, Love', a £5 bargain from Morrisons- at least £3 overpriced.... get the picture?

Sniggering at Lesley's comment re the DVD being overpriced!

Loved your analysis of the use of colour in the film.

We have VERY few DVDs, but every now and then we watch one of the free ones that come with the Sunday Papers. Some have been pretty good, it has to be said. Oh, and we once watched an IKEA promotional one (yes, REALLY!) which was fascinating in the way that it sucked you and "made" you watch the whole thing in much the same way that the shops "encourage" you to take in the whole store.......

Fascinating review - I'm ashamed to say that I'm not sure if I've seen this film. It seems familiar but I don't remember it. I'm capable of forgetting having seen a film, so I'm really not sure. (Old age is a terrible thing!) I'll have to look out for it now.

Having said that, I LOVE 'All That Heaven Allows' ever since we were shown it as part of our film studies course at college. (I think Douglas Sirk was 'in' at the time.) I love the saturated technicolour of those fifties films, and the style of everything.

I too have a pile of DVDs yet to be watched - mostly ones that have been bought as presents. How does one find the time for everything?