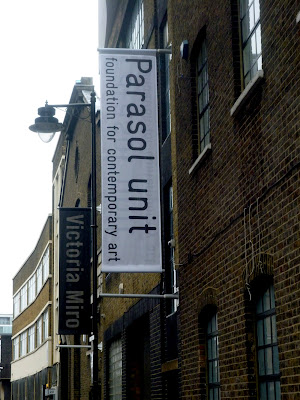 Today I nipped into London to catch the last day of the current exhibition at the Parasol Unit in Wharf Road. I'd never been there before but, as you can see, it's right next door to Victoria Miro. It was a beautiful space with a garden at the back that also had installations in it -- dozens of silver balls held captive in the frozen pond, and a Japanese-looking shelter which will help you fend off Seasonal Affective Disorder if you stay under its fluorescent light tubes. 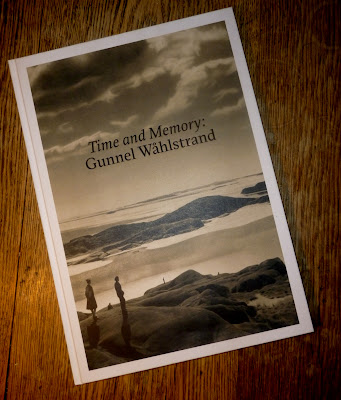 But the reason I went was to see the extraordinarily beautiful indian-ink paintings of Gunnel Wåhlstrand, a Swedish artist. I have just taken some quick photos of pages from the catalogue, so as not to reproduce them too exactly, but you'll see how exquisite they are. 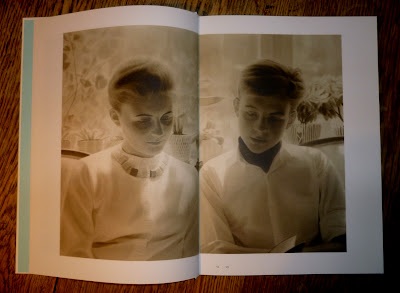 The actual artworks are on a very large scale. They are incredibly painstaking reproductions of the artist's old family photographs, which is why they appealed so much to me. The particular poignancy to the artist of these photos is explained here. 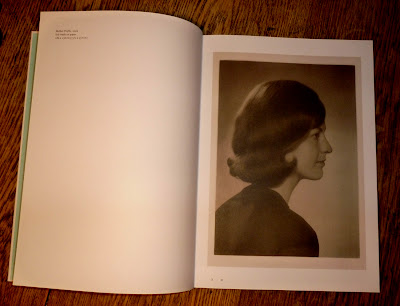 The realism of the paintings is uncanny, but what I found interesting was the edges of the painted area where the realism breaks down into a looser sort of threshold between the painted and unpainted areas and you can see the individual strokes and tiny washes of ink. If it wasn't for this strip around the painting, you wouldn't really be able to tell that it wasn't just, say, a blown-up digital scan, so it's crucial that the viewer can see it. 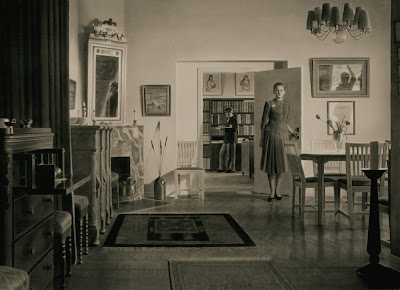 In the same way, there is often a small element in the painting itself which undermines the almost chilly perfection of the scene. For example, in the painting above, all the furniture fits like a jigsaw and the figures are unnaturally poised. All is still -- apart from the figure reflected in the picture on the right-hand side, who is perhaps waving at someone out of the window. It's an almost hidden point of freedom within the stifling interior.
There was another painting, of a library, an astonishingly complex scene full of books and shelves. Students bent over their books and I noticed that some of these figures were blurred, introducing a disturbing note into the stillness. I guess that they must have been blurred in the original photo on which the painting was based and so have been faithfully blurred in the reproduction. But the blurring foregrounds the fact that this is not a painting of 'reality' but of a photo, at a remove from reality. It's what I particularly like about certain photorealist art -- when the apparent 'reality' you're looking at is subverted and you're forced to question what it is you're being shown.
These beautiful paintings have really got under my skin.
Posted by Jane Housham at 22:14

These are breathtaking in their skill and I am intrigued to hear of their scale. That just makes them more even more interesting to me. Lucky you caught them on the last day.

How great to meet you on Saturday Jane, even if only briefly. This exhibition looks intriguing, I wonder if the technique is unique to Gunnel Wahlstrand. I don't know how I missed your wonderful creative hints video - it looks very professional and is great fun.
Keep up the good work.

How fascinating! I would be interested in the scale thing, since both you and "The Guardian" mention scale......... but how big are they? Also, the one that has the title something like "By the Window" looks almost as if it is a negative (although it isn't!). It's the sheer brightness of the whites I think.........

Wow, what an interesting exhibition. I hadn't heard about this one, and now I've missed it, grrrrr!

Looks incredible. Almost Richter-like in the realism...am going to read more. Thanks for the encouragement on the no-tv front. I'm going to try without a boxed set until the weekend...promise!