It's already nearly the weekend again and I haven't written up last Saturday -- tut tut. 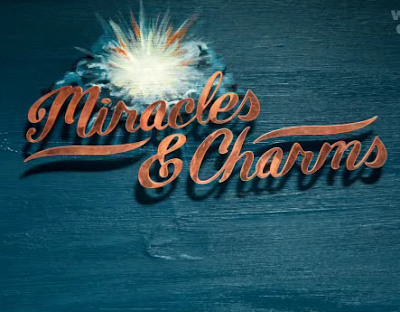 I took my kids to London -- ostensibly for shopping but I made it part of the deal that we would also drop in to two small exhibitions. I think I was bribing myself for the trip, in a reversal of the usual set-up where I sweeten a 'boring' visit for the kids with some shopping. Anyway, it worked well and I discovered that the Wellcome Collection on the Euston Road is a place that perfectly nourishes very many of my interests and really I'd like to go and live there and just curl up in a corner of the bookshop at night and wake up again in the morning to reach out for another lovely book. How is it possible that I've never been there before?
There are two linked exhibitions on there at the moment, both finished on Feb 26th, so, once again I'm afraid I only got there right at the tail end. Both are worth catching, in my view.
The first is a wonderful selection of Mexican retablos, naive paintings done on tin to celebrate survival after terrible mishaps and thanking a particular saint or saint who responded to prayers at the moment of greatest need and interceded to save the poor victim from death. So there were many calamities -- madness, near drowning, fire, electrocution, dreadful falls and more -- all painted in a very consistent style which makes one think they must be able to be categorized as 'folk art'. What I'm not clear about is whether the grateful savees painted the pictures themselves or commissioned a retablo artist to do it for them. The practice has not entirely died out and there was a very interesting film where someone who had pulled a woman from the rubble of the 1985 earthquake in Mexico City seemed to be briefing an artist to paint a retablo of the event -- though it's possible that he was just giving an interview about his first terrible and then miraculous experiences. Someone was there sketching as he talked, so perhaps this was the artist. Sorry to be so vague but, alas, I felt I had to get a move on from the outset as my offspring were not as engaged in the show as I was...
There was a film being projected against one whole wall of the Mexican city of Guanajuato, a place of pilgrimage. It was filmed at dawn, you can see buses and cars moving quietly through the streets and it was rather beautiful. Again, I don't know the full information behind it -- but you can watch all the films on the Wellcome Collection website. 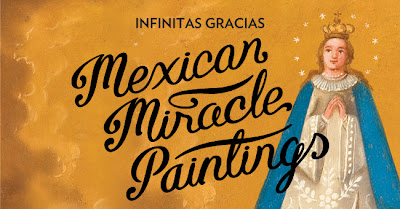 Here are a few more retablos where you may be able to work out what has befallen the 'sponsor' of the painting -- and how they have been saved. 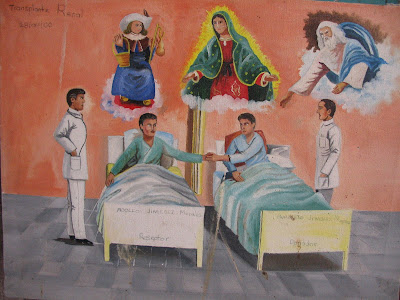 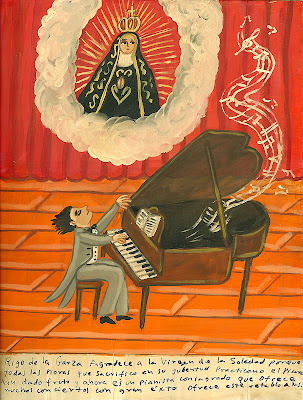 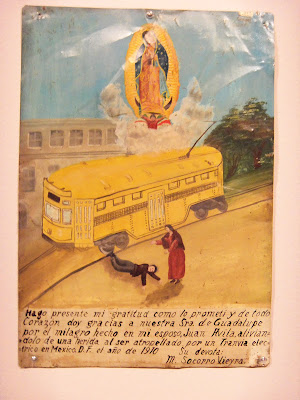 It all reminded me of the Mexican Day of the Dead, and Frida Kahlo (with her dreadful tram accident), and J. G. Posada's 'penny dreadful' prints. Mexico does seem to be a wonderfully singular place -- it's a shame it's too scary (for me) to go there at the moment. I should have gone twenty years ago instead of trying to make my own Mexican Day of the Dead shrine in the spare bedroom of my flat in Crouch End. Those were the days.


In an adjoining room at the Wellcome there was another exhibition, this one based on the collection of amulets and charms of Mr Edward Lovett at the turn of the 20th century. There's a very good page on the Wellcome website where you can look closely at some of the amulets. 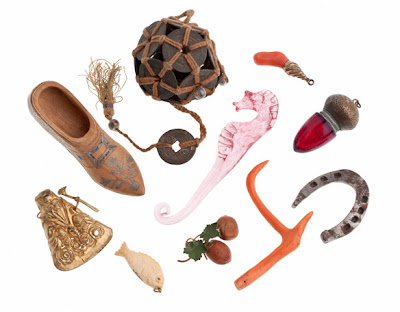 I particularly liked the lucky glass seahorses, the hearts, acorns (to protect against lightning), belemnites (to protect against thunder -- we used to pick these up on the beach at Whitby when I was little), hands and fragments of red coral (to ward off the evil eye). 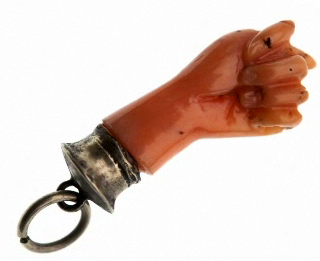 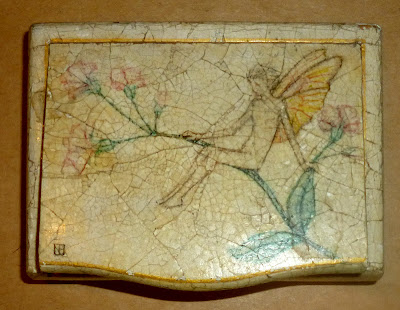 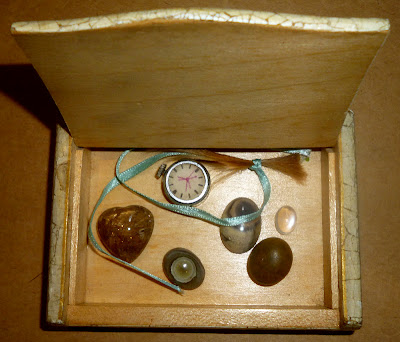 Inside there's a lock of Charlie's baby hair, an agate heart, a moonstone, a couple of stones with 'eyes' and my special little egg-shaped stone. It's a miracle in itself that I haven't lost these over the years.
The charms at the Wellcome were the stimulus for some beautiful miniature artworks by Felicity Powell done in wax. There was a film of her working, in close-up, and it was incredible to see how she smeared and scraped the tiny quantities of wax (with her fingers and with dental tools) to make eerily translucent images which seemed very redolent of Victorian melodrama -- but in a very wonderful way. Below is just a screengrab from the Wellcome website where you can look at all her work in detail: 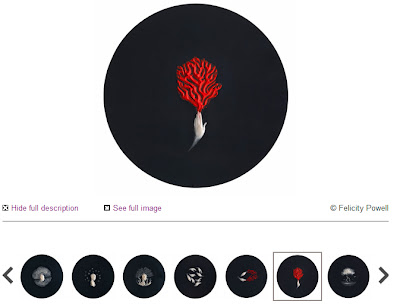 Finally, the bookshop at the Wellcome was really fantastic and I could hardly wrench myself away from it -- but it was no good my buying books that day as we were just off to Oxford Street and the earthly paradise that is Topshop, so my carrying strength was needed for other stuff than books....
Posted by Jane Housham at 21:57

Thanks for alerting me to this place. It looks fascinating. Is it a relative of the Wellcome Museum of Medicine at the top of the Science Museum. That's good too.

That was a fascinating exhibition. I really enjoy seeing all these exhibitions through your eyes ... they must all be so inspiring to experience in real life.

I remember the Oxford St Top Shop ... it was just down the road from the Body Shop where I used to pretend I liked flogging soap and cream to people.

I'm going to keep an eye on this place - it looks very interesting! I'm gutted that I will miss the exhibitions you've mentioned!

I read about this exhibition a few weeks ago on Thread and Thrift and thought of you then. I should have mentioned it but you found it anyway and how envious I am that you did. The eclectic nature of this would have kept me occupied for hours. Amulets and charms sounds like the stimulus for a body of work..... The website for the Wellcome Foundation has some amazing photographs from their collections. I'm particularly fond of the bearded ladies and the gigantic lady from the mountains... now you'll have to go and look to see what I'm on about....

Oh I'm gutted I've missed the Mexican exhibition, it looks WONDERFUL, right up my street! I'll have to make do with your brilliant review and website pics.

A friend of mine in London has been raving for ages about the Wellcome. She gave me the book of the retablos for Christmas, but I didn't realise the exhibition had carried on so long.

The lucky charms look interesting too. In my wanderings for the Billiken blog, I found this site.
https://www.churchofgoodluck.com/

I'm not sure about the 'church' aspect(!), but their 'Museum of Good Luck' pages are really interesting. The curio catalogue pages are fantastic.

That looks a really interesting exhibition. Thanks for sharing. You... A collection of amulets ? Really... Well you do surprise me!

I can't believe I've never been there but think I might have to correct that very soon.

I often forget about the Wellcome - just off my beaten track. Missed Filth, and unless I get my skates on, will miss these too alas. But what discoveries - I am really pleased I know now that acorns will protect me from lightning. Much easier to get hold of than belemnites.

Oh how I miss things living so far from London, so much wonder in those exhibitions.