Are you still with me? Thanks so much for your comments about New York -- I know it's a bit much to draw it out for such a long time, but it would take so long to record the whole trip in one go. I'm late posting again today as I've been finishing off some Thank You card designs to be sent to relatives. 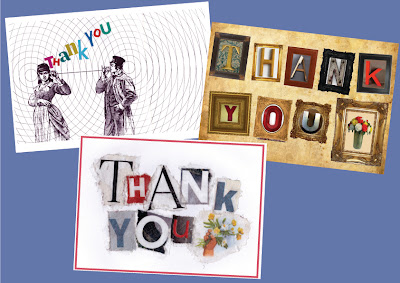 So, on our Tuesday in New York, we began by trying to offset the badness of the previous day with a healthy breakfast. I had oatmeal with berries and a smoothie. Not impressed! Once I had eaten the meagre scattering of berries, the porridge was bland and tasteless. I only like porridge as a carrier for, erm, cream, butter, brown sugar, strawberries, etc, etc. The smoothie was not a smoothie in my book but a slushy! Nasty icy thing. Let's face it, I'm just not a naturally healthy eater. I blame my granny on my dad's side (who I also seem to be starting to resemble physically, which perhaps shouldn't come as any surprise but it is rather unnerving) -- who worked in the baking bit of a baker's shop and was hardly ever not making a cake at any time of night or day.
Yes, it was more airport-style security in Battery Park in order to board a small boat to go out to Ellis Island. When you are being herded through a shed in your stockinged feet with your coat and belt and belongings in a plastic box you start to wonder if it's really worth it. But a person at work who I respect very much (a History professor) had told me he had wept at Ellis Island to see the touching belongings of the immigrants, and so I very much wanted to go there. All the time that we'd been in New York I had been reading Vol 3 of The Emigrants, Vilhelm Moberg's incredible 4-volume sequence about Swedish emigrants who went to America in 1850. I love these books so much and will be bereft when I reach the end (Vol 4 is on its way from Amazon as I type this). Reading this book also heightened my sense of expectation about visiting the point of entry for 12 million immigrants to the United States.
We chugged past the Statue of Liberty (you can't help but be moved by it -- Liberty seems lonely out there in the water). Before long we had arrived at Ellis Island, me trying to imagine I was Kristina Nilsson, pregnant, sick, struggling with three small children and a huge Swedish chest, as I arrived in America after a three-month journey on a filthy ship.
The museum was surprisingly serious, absolutely no dumbing down of this subject which is so significant in America's history. There were an awful lot of boards to read and a massive amount of information to ingest. I decided to try to follow a Swedish thread through it all.
The cabinets of objects brought into America by immigrants were on the third floor. We made our way up there and I prepared to be touched by them -- I wanted to be touched! Sadly, I remained unmoved, probably because you can't really set yourself up for emotion in that way. Lord knows I cry easily enough (Joe and Pip's final hug on Great Expectations earlier this week...) but it wasn't happening this time.
We sailed back to the city on the next boat and went for lunch at the famous Oyster restaurant underneath Grand Central Station. The station itself is a treat, with its vast hall, mirroring the hall at Ellis Island in a way.
The restaurant was fantastic, one of those down-to-earth places that serve great food without making much of a fuss about it. The menu was incredible, with oysters (ugh!), fish and scallops from all over America. We had scallops with fries and creamed spinach. The scallops were huge, about three or four times bigger than the ones you usually get in the UK. And we ordered far too much spinach! When will we learn?
You may have been wondering where the art was in this New York trip. Somehow, it all got bunched up at the end and now it began, with the wonderful spirally Guggenheim. When we got there, I was suddenly strongly put in mind of my Mum, who visited New York on her own in the Eighties. I remember her telling me how much she loved going to the Guggenheim, but that she'd been dying to borrow one of their wheelchairs, ride in the lift to the top of the spiral and let gravity whizz her all the way down. 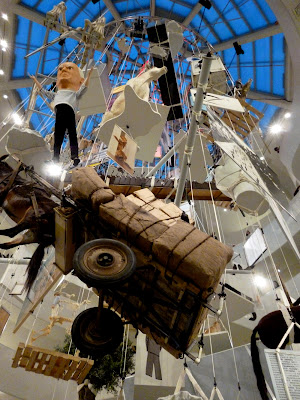 This time, all the art had been removed from the gallery walls and the entire space within the spiral was given over to a massive retrospective of the work of Maurizio Cattelan. I just can't pretend that I was really aware of his work before I saw this show, but I certainly am now. The visual impact of the mass of objects strung up on ropes was amazing. 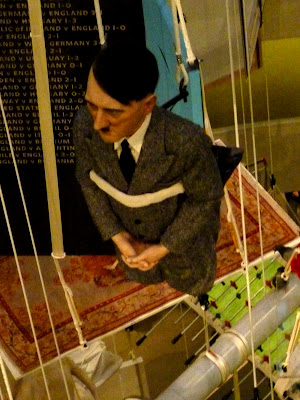 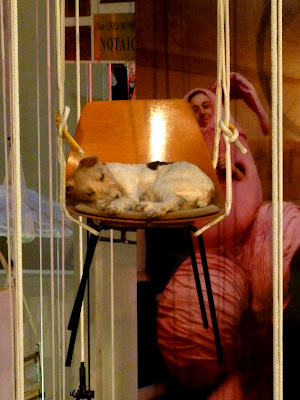 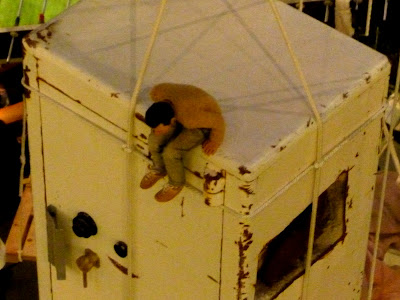 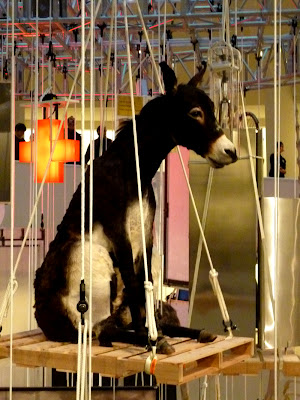 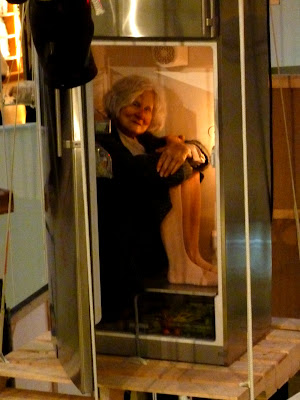 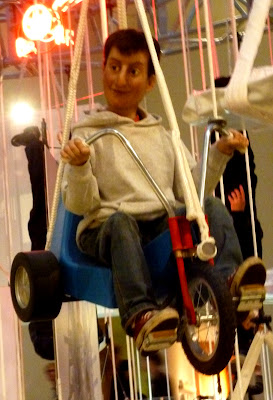 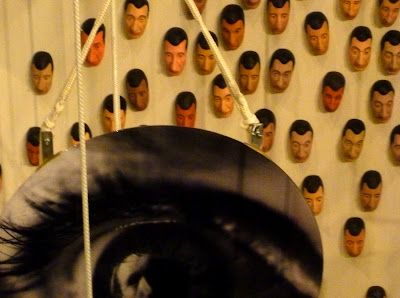 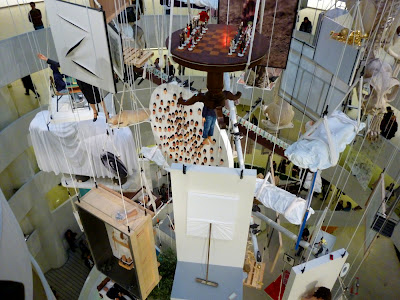 What I finally understood was that this wasn't some one-off installation -- or rather, it was, but each element of the installation was a re-creation of an earlier work by Cattelan, but now treated in this 'disrespectful' way, strung up, competing for attention with the mass of other objects. So it was a retrospective, giving a full overview of the artist's work to date, but it also had its own impact, undermining the seriousness of a gallery space like the Guggenheim, and also, to me, suggesting the artist's own 'head space' crowded with ideas and memories. It was fantastic, anyway.
That evening we went to see the musical Rock of Ages, which was fun (it's about 80s rock music, but also very sweet and pantomimey with a timeless, nay, almost Shakespearean, love story). It worried me that most of the people sitting around us in the stalls didn't seem to speak English, and they were a little bit slow to warm up, but by the end of Act 2, led on by a few dedicated rock 'dudes and dudettes' (ladies, those pumping fists became just a little tiresome after an hour and a half...), plenty of them were dancing in the aisles in the finale. A weird thing was that hunky male usherettes (? ushers?) sold drinks right the way through the performance, but it didn't really distract too much.

Come back tomorrow for MOMA and M&M World...
Posted by Jane Housham at 17:55

Loved this post. Especially seeing the spirals of the Guggenheim through the mass.

I must read The Emigrants. Sounds wonderful. I didn't go to Ellis Island. Now I wish I did.

What a memorable trip you had ... did you plan everyday? You must have otherwise it would be chaotic. Now I want to go back and do New York properly!

What strikes me about your posts are how amazingly colourful they are. Is it just how grey it has been here that is doing that? Maybe not. I'm very impressed at how much you managed to pack in - rather like the way novels and radio plays always seem so dense with activity in a short space of time.

I know just what you mean about the spontaneity of emotion at exhibitions. Sometimes something just gets you. Or not.

Just absorbing it all slowly Jane. What a trip to remember.