Reeling a little from the time difference, we woke up on our first day in New York and tipped ourselves out onto the pavement. We were staying at the same hotel I'd stayed at all those years earlier when I was on my two work trips, The Paramount on West 46th Street.

In those days it was trendy, with an interior designed by Philippe Starck. It still has a nice vibe but seems slightly wistfully retro, as though searching for its lost soul. It's been refurbished quite recently (I guess even the trendiest hotels get tired after a while) and there was an exhibition of huge painterly canvases featuring Top Cat and Tweety Pie in the lobby.
We didn't do much at the hotel apart from sleep. The best thing about it is that it's about a minute from Times Square. I don't remember loving Times Square the last time I was here, but now it seemed like a wonderful womb of warm light, a tulip-shaped space opening up almost organically amidst the skyscrapers. The constant throbbing of the huge electronic billboards didn't feel aggressive or intrusive, but, rather, like a reassuring life force. I realise that that sounds fanciful, but that's how it felt. 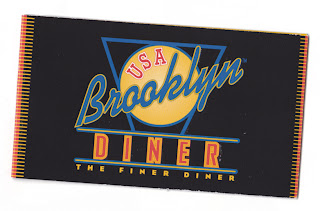 So, breakfast. Don't worry, I'm not going to give you the lowdown on every meal we ate, but we happened by chance on the Brooklyn Diner at 155 W. 43rd Street and it turned out to be by far the best diner we tried out the whole week. Warm and intimate, with a panelled interior like an old liner, it felt like the safest place in the world. Plus they did a great breakfast with ruby grapefruit juice and real poached eggs.
Before we left home, we had worked out a rough plan of what we wanted to do in the week. This is such a plus (for us -- it might not suit more spontaneous folk) -- it takes all the agony out of the question, 'What are we going to do today?'. You just consult the plan. Of course the plan can't be too rigid, and has to leave plenty of room for diversions and surprises, but it's great to wake up each morning with a rough idea of which way you're going to point your nose when you step outside. But it so happened that the most adventurous things we wanted to do could only be done on the first couple of days we were there. Thus it was that, after our lovely breakfast, we headed out to a rather battered block in Brooklyn.
One of the blogs I follow is Morbid Anatomy. This really interesting blog has given me an in to all sorts of things (including Peter Blake's Museum of Everything earlier this year), and I had read that Joanna Ebenstein, who writes the blog and runs the Morbid Anatomy Library and Cabinet, was holding a Christmas Fair on our first day in New York. I felt it would be wonderful to go and make contact with the real place and person behind the blog. So we did. 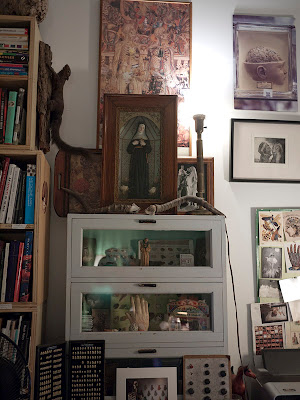 It was definitely worth it. In an inner sanctum behind the Proteus Gowanus gallery is a collection of gothic delight, featuring waxen body parts, stuffed animals and hundreds of other strange treasures, all very much to my taste. 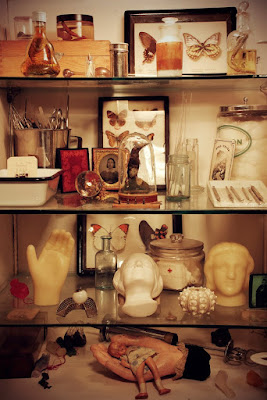 In spite of feeling a little shy, I managed to introduce myself to Joanna, who was extremely nice, and I found out that she is going to be in London in 2012 as an artist in residence. It was very exciting for my little corner of the blogworld to be 'made flesh' in this way.

The strange word 'Gowanus' in the gallery next to Morbid Anatomy turned out to refer to the nearby Gowanus canal, by all (online) accounts a filthy backwater teeming with all kinds of horrible bacteria. This is not my photo of it, but I like it:
All we actually saw of it was much more urban. 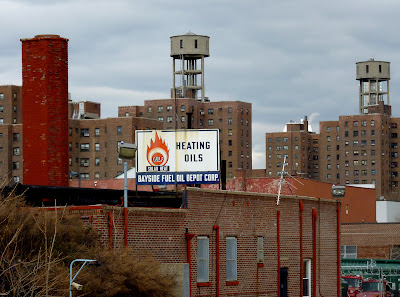 On the way back to the subway station, we spotted a Christmas craft fair in an old swimming baths and went in for a poke around. It was very similar to such fairs in the UK, with a nice atmosphere.
Then we got the subway back to Manhattan and jumped out at Prince Street (fairly randomly), and walked up town. When we got to the Flatiron Building we saw this art installation in the glass 'Prow' at the front, which looked great in the fading afternoon light. 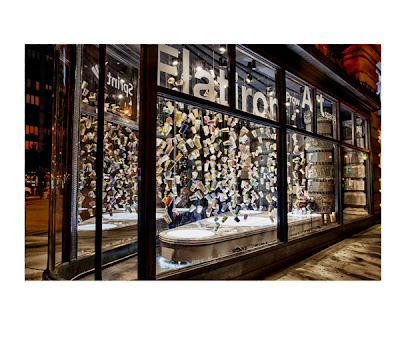 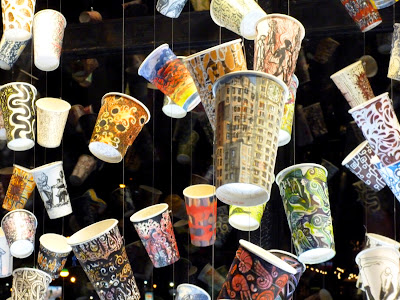 During the day time the artist also sits in the space and draws on new cups to add to the piece.

So we walked and walked and walked until my feet felt like raw stumps, but David had Christmas fever and wanted to see the Christmas windows in the big stores, so we kept on walking up Fifth Avenue. We came to Lord and Taylor, where you had to shuffle in line to see the windows!
Finally we came to Saks, where a huge projected clock was counting down. There were only minutes to go! I couldn't believe our luck. Fancy being here just as some great event unfolded. We stood and waited in great anticipation.
Just as I expected, when it got to ten seconds, the huge crowd that was now gathered began to count down in unison. As we reached zero, the clock faded and music started to play. Then a wonderful animation played out on the front of the building, with machinery, tubes, giant bubbles and snowflakes. 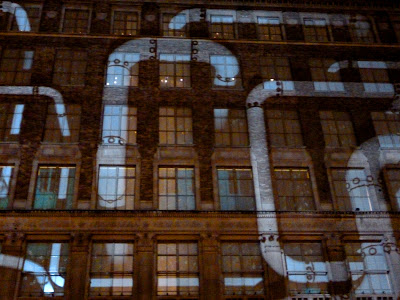 You can watch the whole thing in this video. It's beautiful, but I admit I was slightly disappointed when the clock restarted immediately afterwards -- it runs every fifteen minutes! So not the once in a lifetime moment I thought we'd happened upon. Still, it was lovely.
Then we turned around and found ourselves facing Rockefeller Plaza. The light here was just so beautiful and soft. It made me think of a 1950s Batman comic, for some reason, all soaring perspectives and purple light, pure Gotham City.

I barely made it back to the hotel, such was my weariness, but it was definitely all worth it.
Come back tomorrow for ... Coney Island.
Posted by Jane Housham at 11:39

Only day 1 and I'm jealous already.

I can see I am going to thoroughly enjoy these posts.

I am exhausted after day one but will be heading straight over to day two. Must check out Morbid Anatomy. Is that the same lady that does anthropomorphic taxidermy? Must find out.