Sorry that today's bit about New York is so late. I've been to London, at last, to see the Grayson Perry exhibition at the British Museum.
I was very taken by the exhibition and could certainly understand why I've read so many enthusiastic reports of it on various blogs I follow. I loved the exuberant mixing of cultures in the objects Grayson had selected, and the artworks he'd been inspired to make were incredible. In recent years I haven't been that taken with the logo-filled tapestries he's been doing, the brand-name Bayeuxs, but somehow the pieces in this show seemed more visceral, with a real connection to the artist. I particularly liked the skull with all the English symbols embedded in it, and the cast iron 'Parents' figures with their massive burdens.
But I must get back to New York while it's still fresh in my mind...
So, Monday morning found us getting a sugar rush in the giant pop-up store for Dylan's Candy Bar, even before we'd had breakfast. The day was fast turning into a kitschfest as we breakfasted on 'egg, sausage and cheese biscuits' at 'Tim Horton's Cake and Bake', followed by the best doughnut EVER, just oozing jammy gunge.
We'd set aside the morning to go to the top of the Empire State Building, which was something the kids specially wanted to do. We hadn't bargained on the airport-style security and the endless queues. It took a very long time before we were in the lift and swooshing up to the 86th floor.
Up there it was very very cold and windy. I was very surprised to see one or two pigeons landing on the parapets -- I would have expected them to stay down nearer the ground. We listened to 'Tony', a native New Yorker, giving us the lowdown on everything we could see, on the audio guide. There was a definite air of defiance and patriotism in the recording, post 9/11 -- the Twin Towers might have gone but the Empire State Building was standing proud. No wonder the security was so stringent.
Back down to earth again, we walked to Bryant Park where there was a Christmas market. Continuing the day's healthy theme, we had cheese and ham crepes and almond-flavoured hot chocolate, sitting on the comfy seats out in the open. We watched the brisk sales at a pickle stall, Pickle Me Pete. People's faces were lighting up as they spied the pickle man, and they would buy a huge gherkin to eat like a lolly! 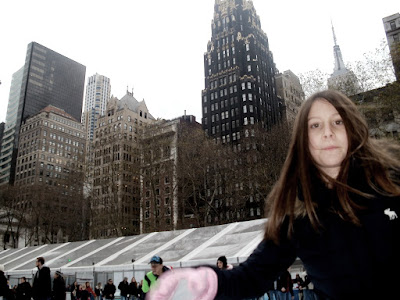 There was ice-skating in Bryant Park as well. It was very relaxed and pretty. The holiday spirit was really building up.
We just wandered up Fifth Avenue again, taking in Radio City and Abercrombie and Fitch where a certain person had been promised a hoody for Christmas. 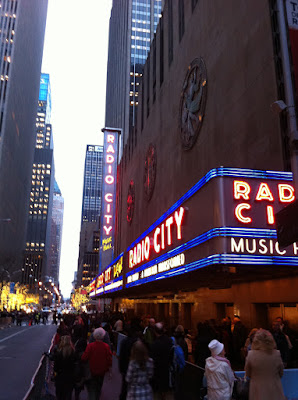 When we had entered the US two days previously and were having our retinas photographed and our fingerprints taken digitally (at least I think that's what was going on), the US Marshal on the desk, oblivious to the massive queue waiting to come through immigration, had chatted to us for far too long -- we didn't want to displease him so we just smiled and nodded -- but he told us that 'the best show in town' was the Christmas Spectacular at Radio City. There were crowds of people going inside to see it as we passed, but as far as we could tell it was very oldfashioned with the Rockettes dancing girls the chief selling point. So we just kept on walking until I virtually had to be airlifted back to the hotel.
Posted by Jane Housham at 21:19

What a great trip, you lucky duck.

Sounds great Jane. All those calories! I suspect all that walking burned them off though... or not?