The Museum of Everything #3 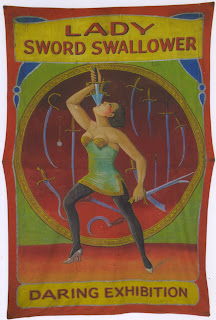 Yesterday afternoon, the four of us headed into London to catch the very last day of the Museum of Everything (#3) which, as far as I can tell, is a sort of pop-up museum which has previously popped up at Tate Modern, and somewhere else too. This was the third instance of its popping up.
The Museum was housed in some sort of empty warehouse just behind Primrose Hill, that most chichi of London villages. It consisted of wonderful items of kitsch and folk art from Sir Peter Blake's personal collection and other things curated by him -- Punch and Judy puppets, cigarette silks, circus posters, stuffed animals, fairground art, outsider art -- a great conglomeration of mad-looking things which have informed Peter Blake's art throughout his career. 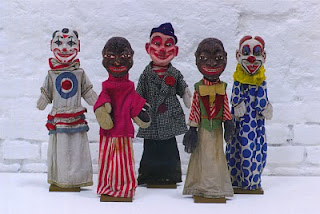 The way through the exhibits was winding and myseterious. You had to push through heavy plastic slats at various points, and eclectic music came from unpredictable places. When we came to the largest space, an Ethiopian musician was playing whilst a burlesque-style dancer did the hula-hoop.
It was hard for David and I not to envy the sheer quantity of objects. We feel we are fellow collectors of this kind of stuff but clearly we were out of our league here. David once had the immense luck to visit Peter Blake in his studio for work and he cherishes the time he spent with this artist whose work we admire so much.

Well, at least we got to see it just before it closed. There was a great atmosphere and a sense of event, even if it seemed to be largely populated by a particular breed of affluent and jolie-laide North London types (both male and female -- not sure there is a masculine version of 'jolie-laide').
Afterwards we went out into the late afternoon drizzle and wandered up and down the very posh row of shops, thinking we might go for a cup of tea in, say, the Russian Tearooms or Primrose Patisserie, but all tables were already filled with the rosy-cheeked people of the Hill. So we just went home and had hot-cross buns at our own table.

We were very glad we made the effort to go, though.
Posted by Jane Housham at 18:07

Email ThisBlogThis!Share to TwitterShare to FacebookShare to Pinterest
Labels: Museum of Everything

Must be as if the hole exhibition was especially made for you. If you had told us, that is all in your house, I wouldn't doubt it. And I really love love this squirrels!

That's looks fabulous and a bit eery and Carnivale!

Right up your alley! Am now going to familiarise myself with Sir Peter Blake ... his collection shows great childish imagination. It must have been fun to see!