Saying it with a postcard

I've signed up for Hertfordshire Open Studios for the first time this year. It will take place throughout September 2014 and I feel both excited and apprehensive -- I will be expected to do artist-like things for any visitors (the website where you sign up strongly recommends that you offer demonstrations while your studio is open). That would be quite challenging.
For now, I'm trying to prepare in good time and part of the preparation is to make some work that people might like to buy without spending a lot of money. I'm working on a series of limited edition digital prints which I'll frame. More on these in a moment.
Because I'd signed up for the Open Studios, earlier this month I was invited to meet up with other artists whose studios are nearby. We met at a pub. I was, as usual, rather excitable at this prospect. I got to the pub quite early and had to do that thing of walking around, trying to guess which person or group of people was the bare bones of the get-together. It felt a bit like going on a blind date. Nerve-wracking, but when I got to the far end of the large pub and saw a big table with two women sitting quite far apart I guessed that this must be it -- or they had just had a row. I got the right table! Soon there were ten or eleven of us and although there was the usual awkwardness of meeting a group of people for the first time, it was enjoyable. At a certain point someone made a move to hand out their cards and suddenly everyone did the same, there were a few minutes of happy card-swapping and the ice was definitely broken.
So the get-togethers are going to continue fairly regularly and hopefully friendships will grow out of it (actually some people already knew each other but I didn't know anyone). And the next meeting is coming up already. Last time we discussed something we could do the next time we met and we decided to each bring a postcard of something that has a bearing on our art -- an image of a favourite artwork, whatever we want. This will be a treat for me but it's hard to choose which one to bring: I'm obsessed with postcards. I have about 100 old postcards that I've carefully 'curated' for special qualities I see in them (potential for the sort of art I want to do in relation to them) and I frequently sort through them, again rather obsessively, looking for things I may have missed in them the last time I looked. I was telling my Dad about this activity and he described it as 'forensic', which I think is a very good word for what I'm doing.
So my postcard for the meet-up is going to have to be a Richard Hamilton. A fortnight ago I went to see the Hamilton retrospective at Tate Modern. I've long counted Richard Hamilton among my top ten favourite artists (along with Richter, Rauschenberg, Peter Blake, David Hockney, Warhol, Marlene Dumas, Eric Fischl, David Salle, Wilhelm Sasnal). I've followed him through quite a few different phases of his art, some I've liked more than others, but the work that I do like, I love. I agree with this art critic that he has been lumbered with the title of 'The Father of Pop Art', almost entirely as a result of the collage he made in 1956, 'Just what is it that makes today's homes so different, so appealing?' and that consequently his work as a whole has perhaps been over-valued, in the sense of taken to be more significant than it is, so made to carry a heavier burden of importance than it needed to. But it was very good to be able to see his work brought together and set out chronologically. It was exciting to see, in moving from one room to another, elements of pop culture almost literally breaking in to Hamilton's rather ascetic, pale, barely there academic paintings about perspective and movement. Suddenly, there were spacemen, baseball heroes and JFK, patched in to a new set of pale academic paintings. Popular culture can be seen shouldering its way in to his art in the early sixties.
The best part of the show, for me, were the paintings and prints based on postcards. It was wonderful to see them in the flesh when, previously, I think I've only seen them in reproductions. These have been a true inspiration to me. They were done in an era when enlargements had to be done using cumbersome equipment -- no scanners then -- and when Hamilton took a postcard of Whitley Bay, a little seaside town on the North East coast (quite close to where he had a teaching post at the time) and blew up a detail of it by stages, it was an experiment to see how far he could push the process before the 'real life' image broke down into abstraction. He made this foldout work, using a roughly A5-sized reproduction of the postcard, which shows the steps: 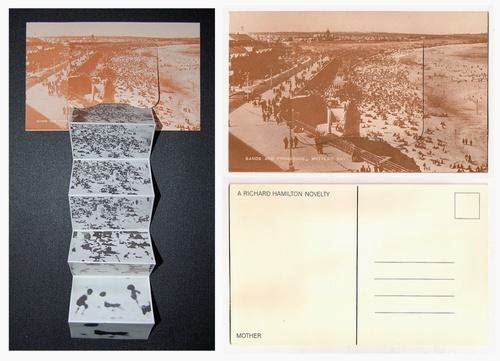 I've got the same postcard that Hamilton used: 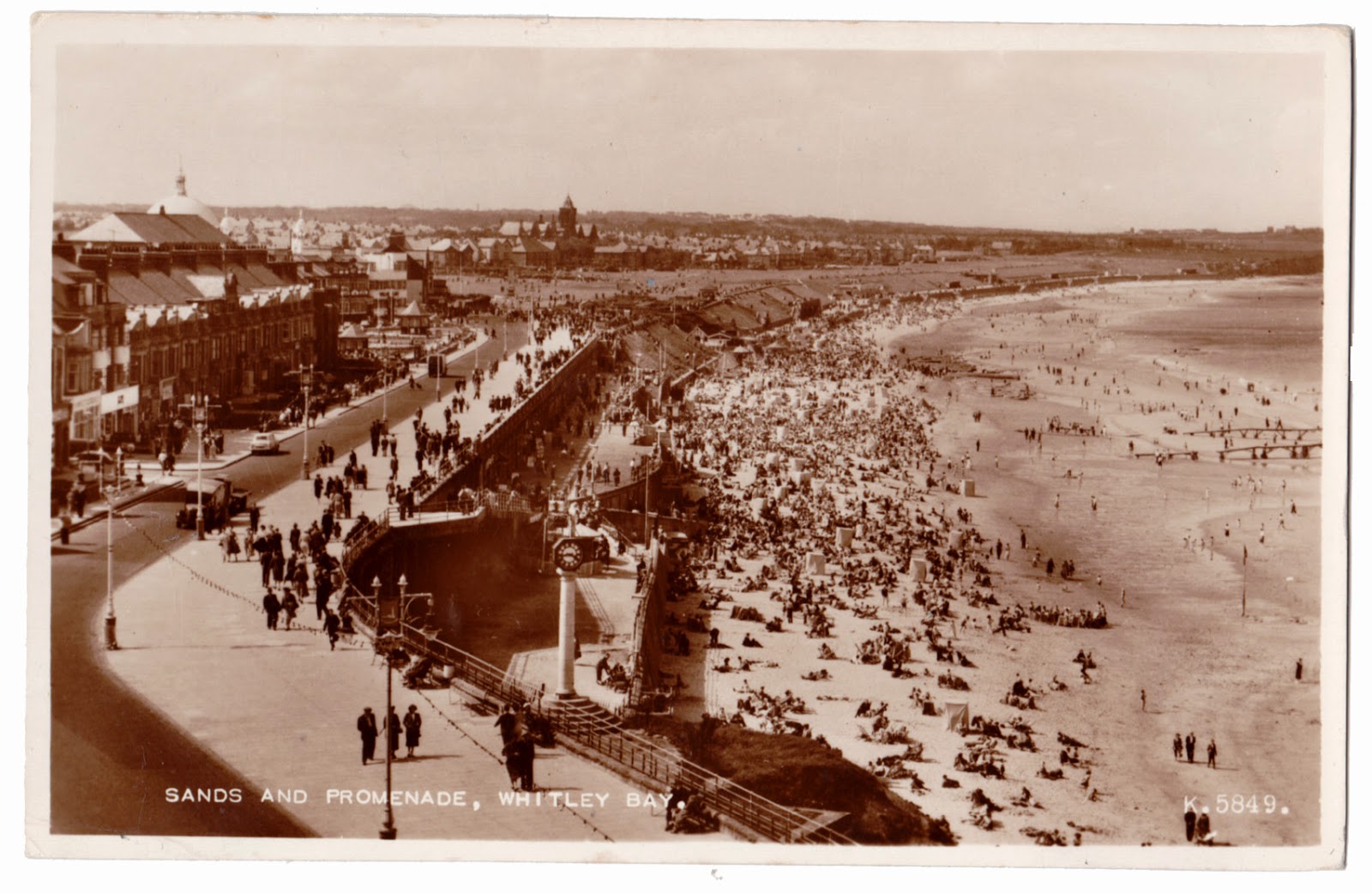 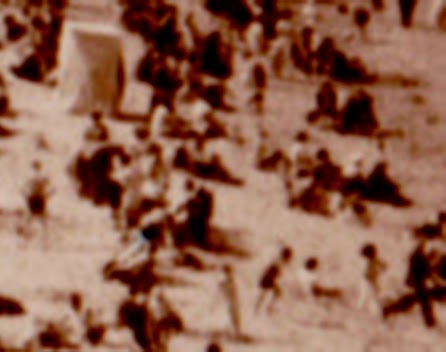 This is Hamilton's print based on his close-up:
Over the past few years I've done quite a number of large mixed-media pieces based on old postcards, for instance: 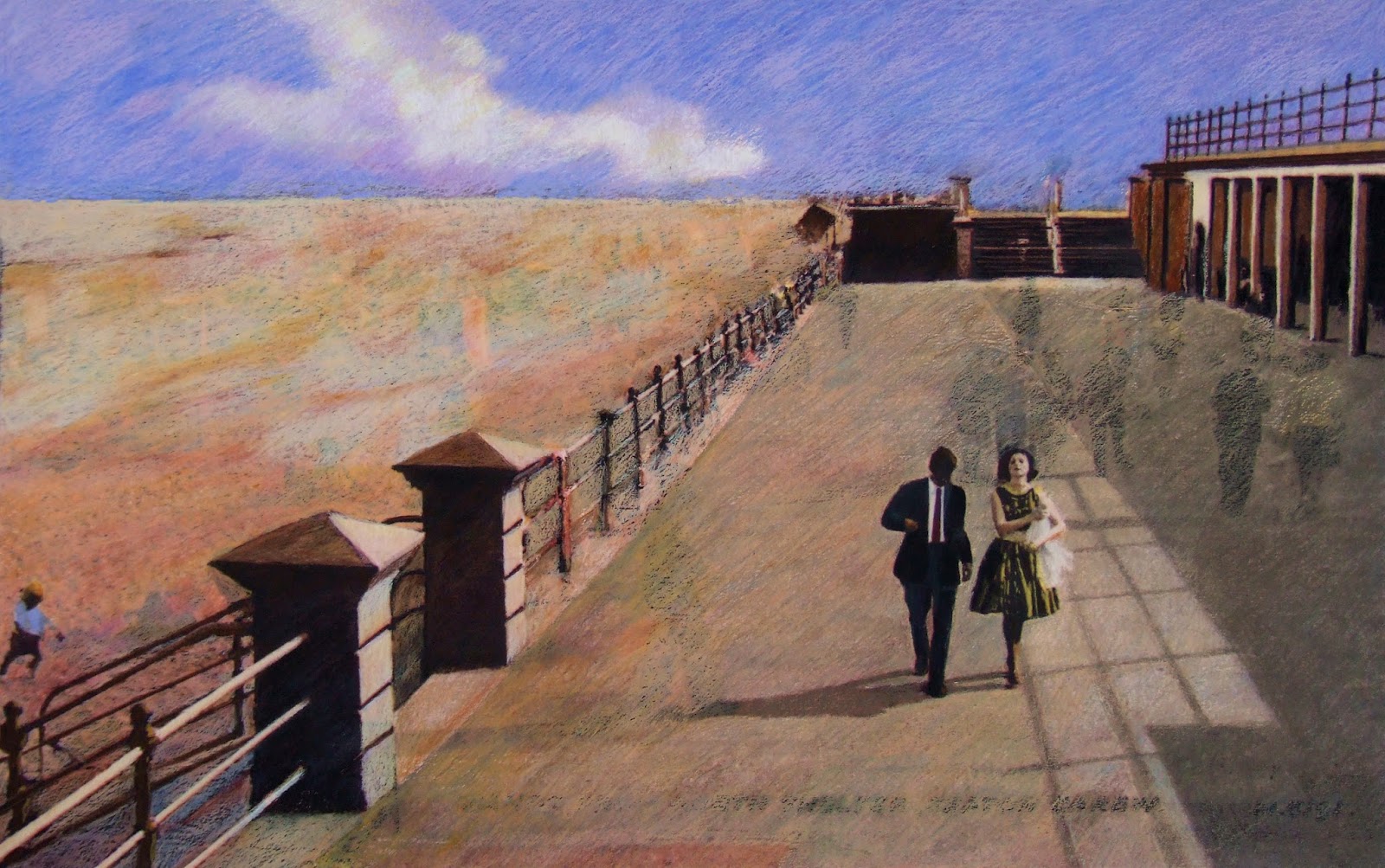 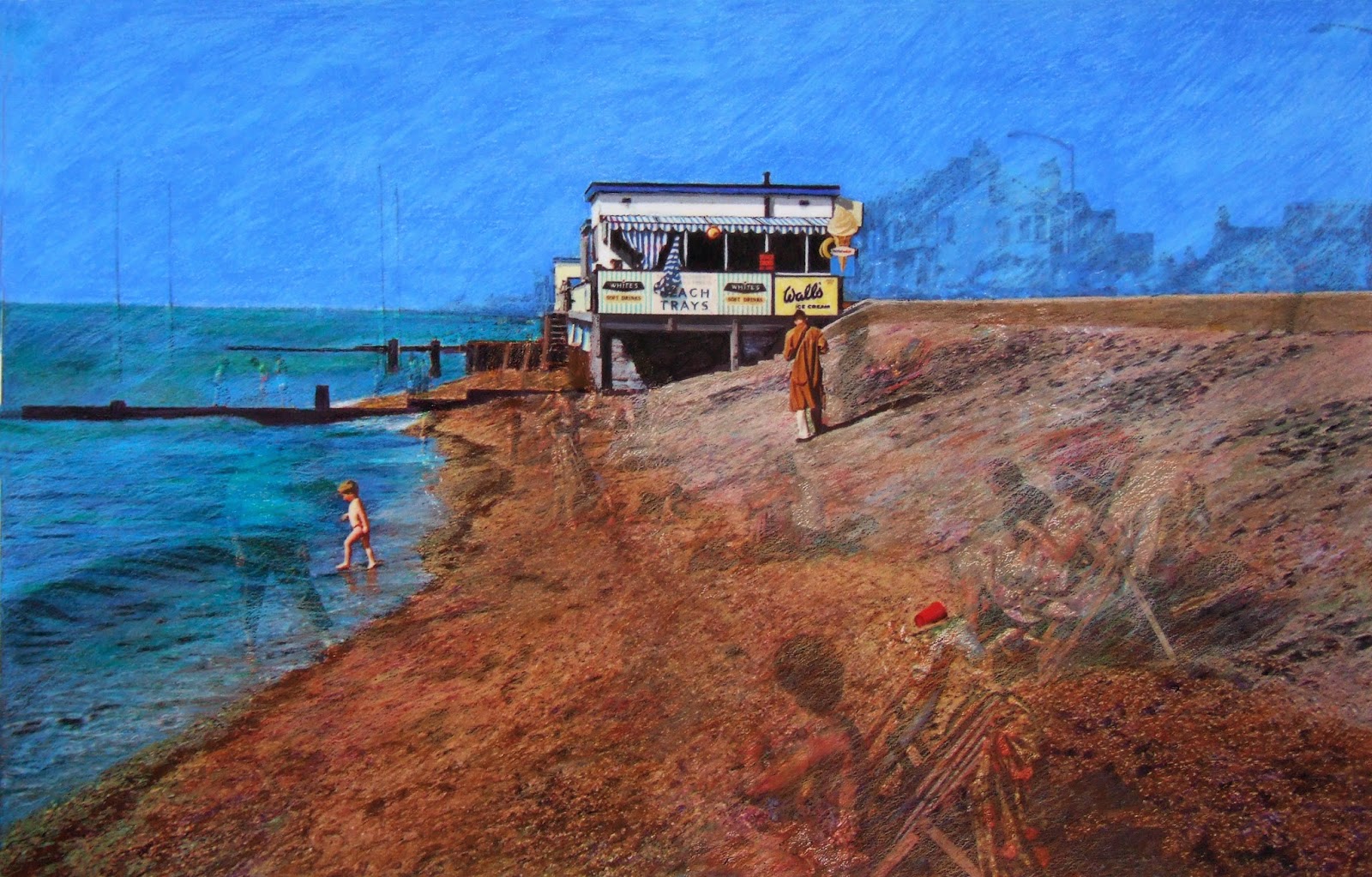 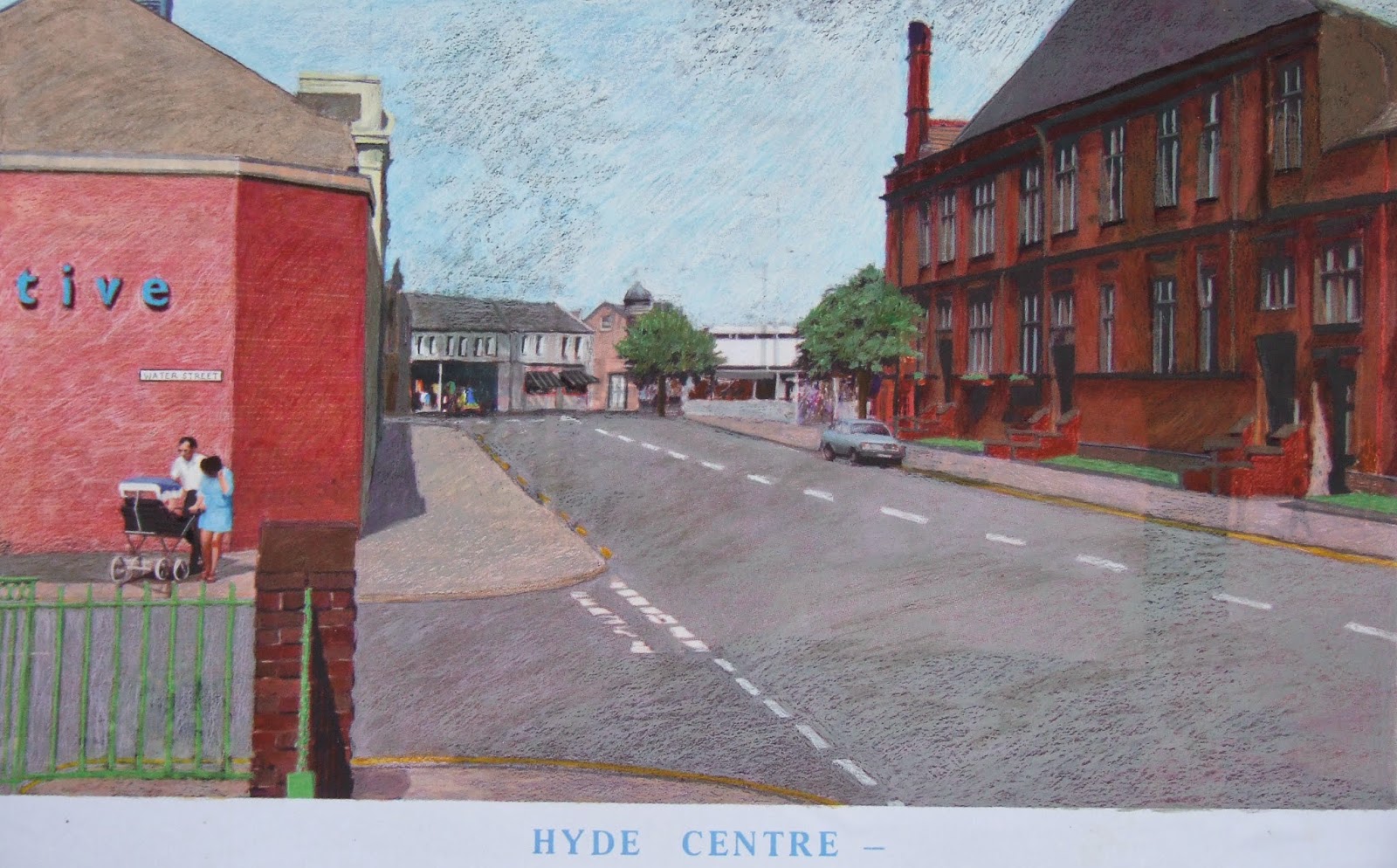 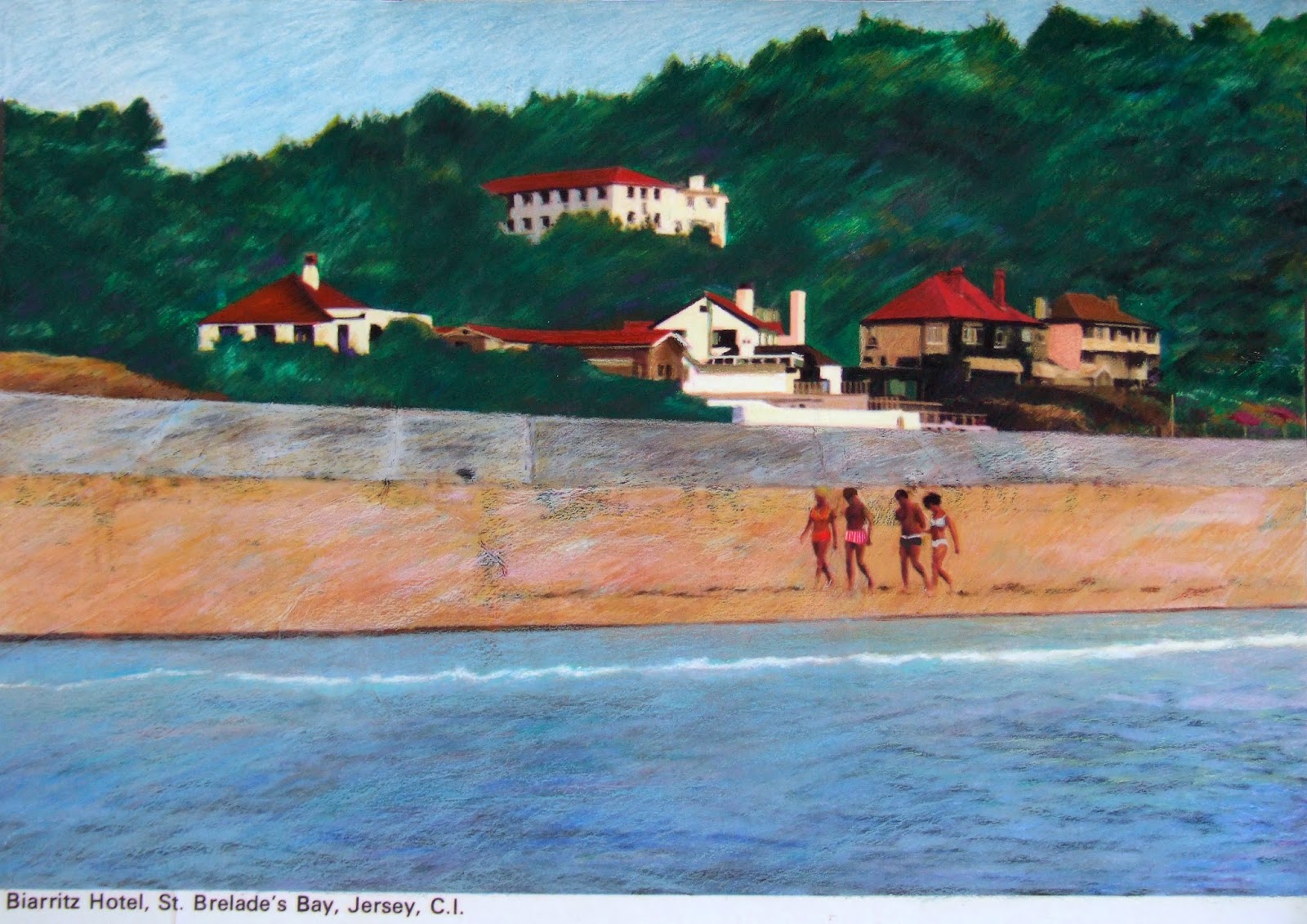 All the above four pictures are about 3' x 4'.The idea was to isolate a 'drama' that was not so apparent in the original postcard, by masking out other figures and objects. I left a ghostly hint of what was once there underneath the pigment. In the third picture down, 'Hyde Centre', most of the right hand side of the original image was taken up by a large tree. I masked it out and recreated the building behind it.
But currently I'm working on a series of digital prints, as mentioned above. In these I hunt for hidden details and make them into a new 'postcard'. So, for instance, below is a print I've made from the same postcard of Seaton Carew as the first of the above four pictures: 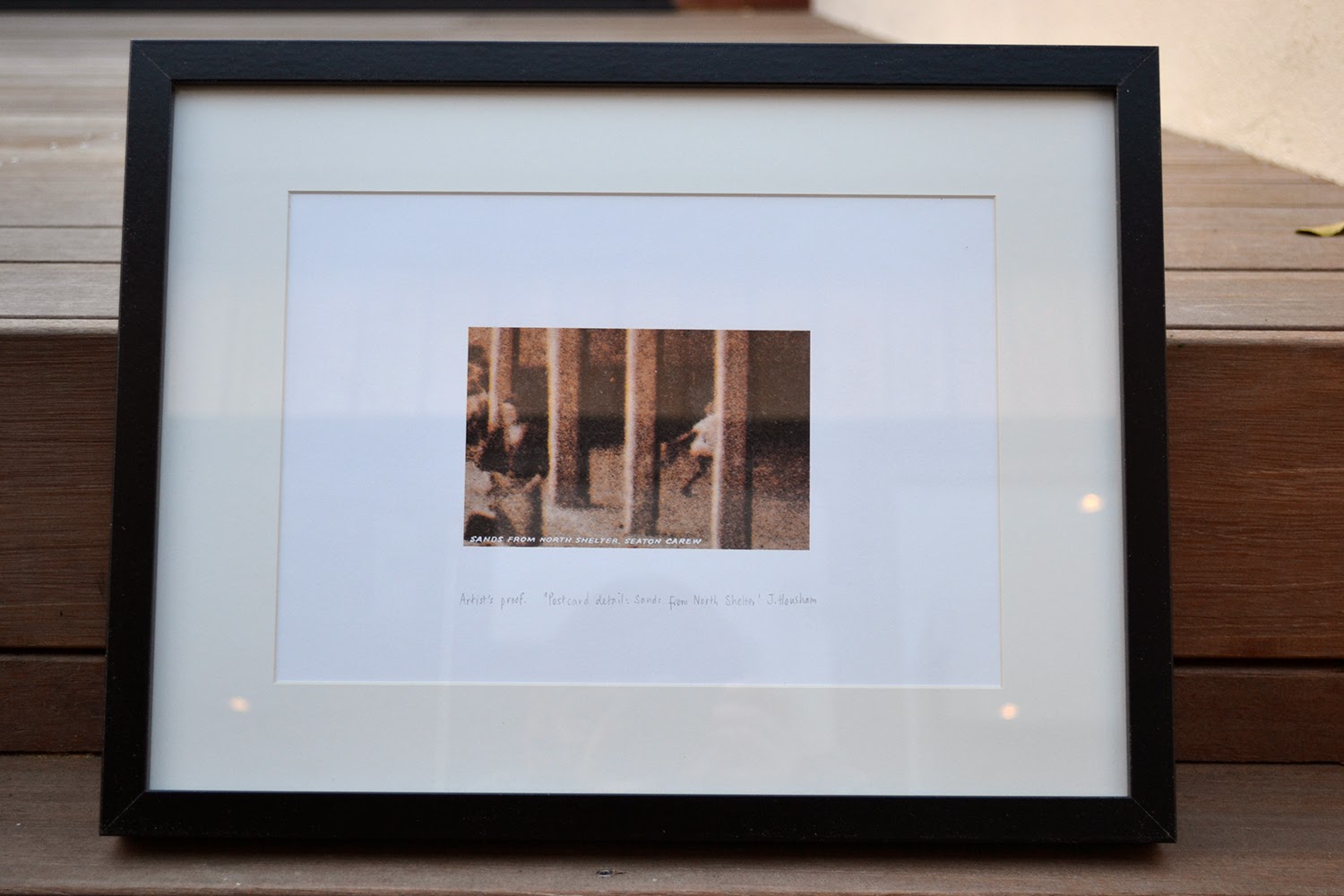 I've found a little girl who looks as though she might be running away. I don't want to upload too detailed a photo of any of my prints because they're digital, and so the image is the artwork -- hence the photo of this one framed, to protect it a little from being reproduced willy nilly. I'm working on lots of different images, but you might have to come along to one of my open studio days to see them properly. I like the quality you get when you go deep into the original image to mine its secrets. Anyway, I hope people will like them. And this is what I'll be talking about at the pub next week, clutching two postcards, one of Whitley Bay and one of a Richard Hamilton blow-up taken from it.

The Richard Hamilton postcards absolutely fascinated me - that was my favourite bit too (along with the Marilyn Monroe photos and what he did with them)! It's really interesting to see what you've done for your artwork, the image of the little girl asks so many questions.

Someone who puts as much into their art practice as you would be a wonderful venue to visit on an art trail. The people of Hertfordshire are in for a treat and I think that by the sound of it this is going to be a good year all round.Picking a postcard as your first 'show and tell' item just plays into your hands. It's a good omen.

I really enjoyed reading about your process and how it connects you with other artists. Thanks

Brillant that you're doing the open studio. And great that you're all getting a chance to meet and talk about your work. A facebook page for your art might be a useful addition to that perhaps? I'd follow you!
Love your postcard works and the ideas behind them. It really is true abstraction - isolating and taking elements out of the original.
Good luck for September!

Beautiful! A reminder that it is all in the details!!
Sorry I cannot see the exposition but perhaps you might share morre?
Happy Mum's Day!

I very much like that last digital image - it leaves so much to the imagination. Good luck with the work and the open studio. I could do with a trip to Herts.