Because of my renewed interest in art derived from postcards, I've been buying more postcards lately, quite often from international sellers. When the cards come in the post, it seems to be standard practice to slot the bought card in between two giveaway cards, used as stiffeners. Such is my interest in all things postcard that I always hope these extra postcards will have something to recommend them to me as well -- who doesn't love a freebie? But the most recent ones have been rather dull. 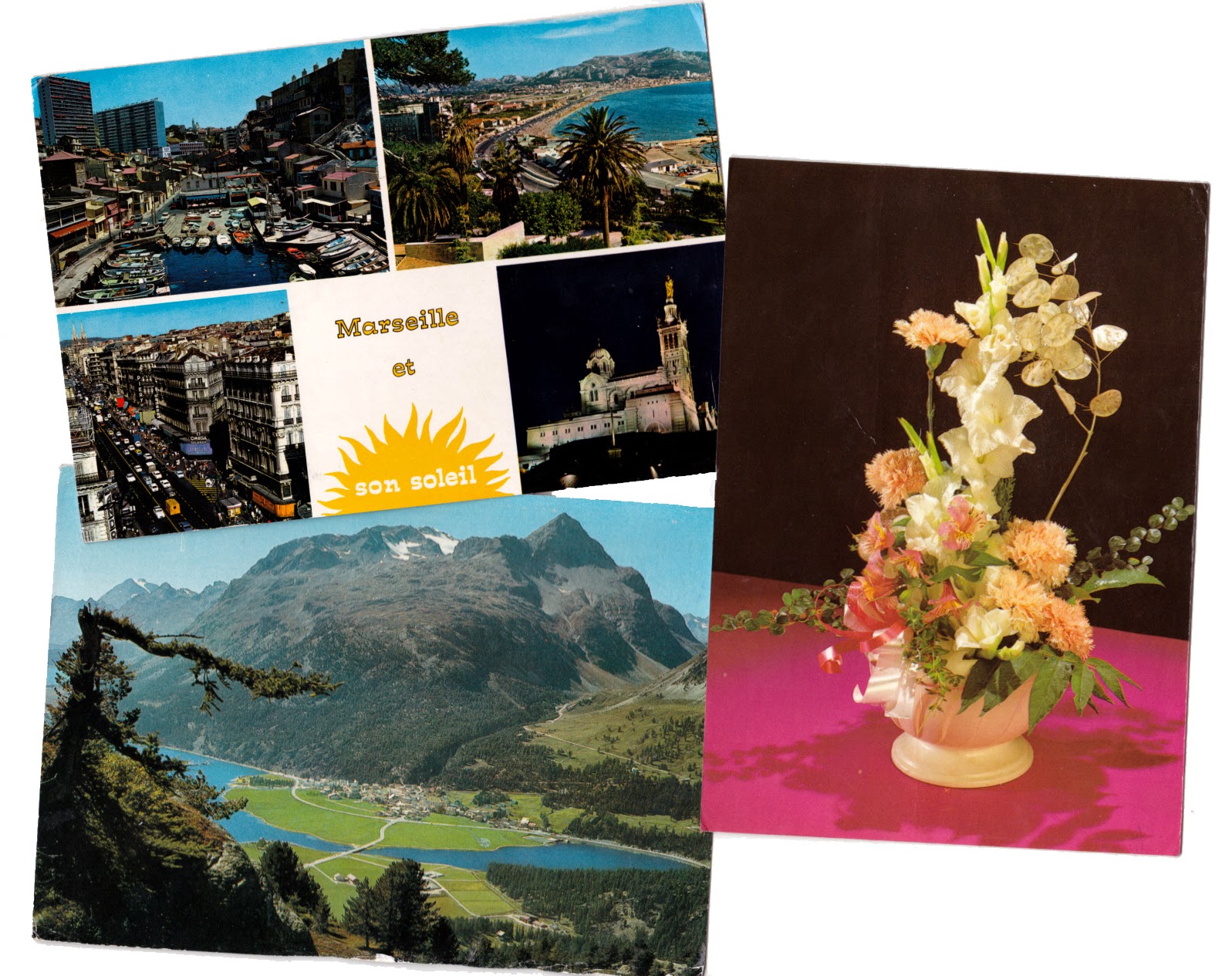 Except.... (now, I may be more or less the last person in Western Europe not to be aware of this story, in which case, please smile understandingly and pass on your way...) I noticed that a couple of these postcards were addressed to the same person. One card was from France, one from Hungary. Then I found a third among my collection, from Switzerland. All addressed to the same person, called Craig Shergold. 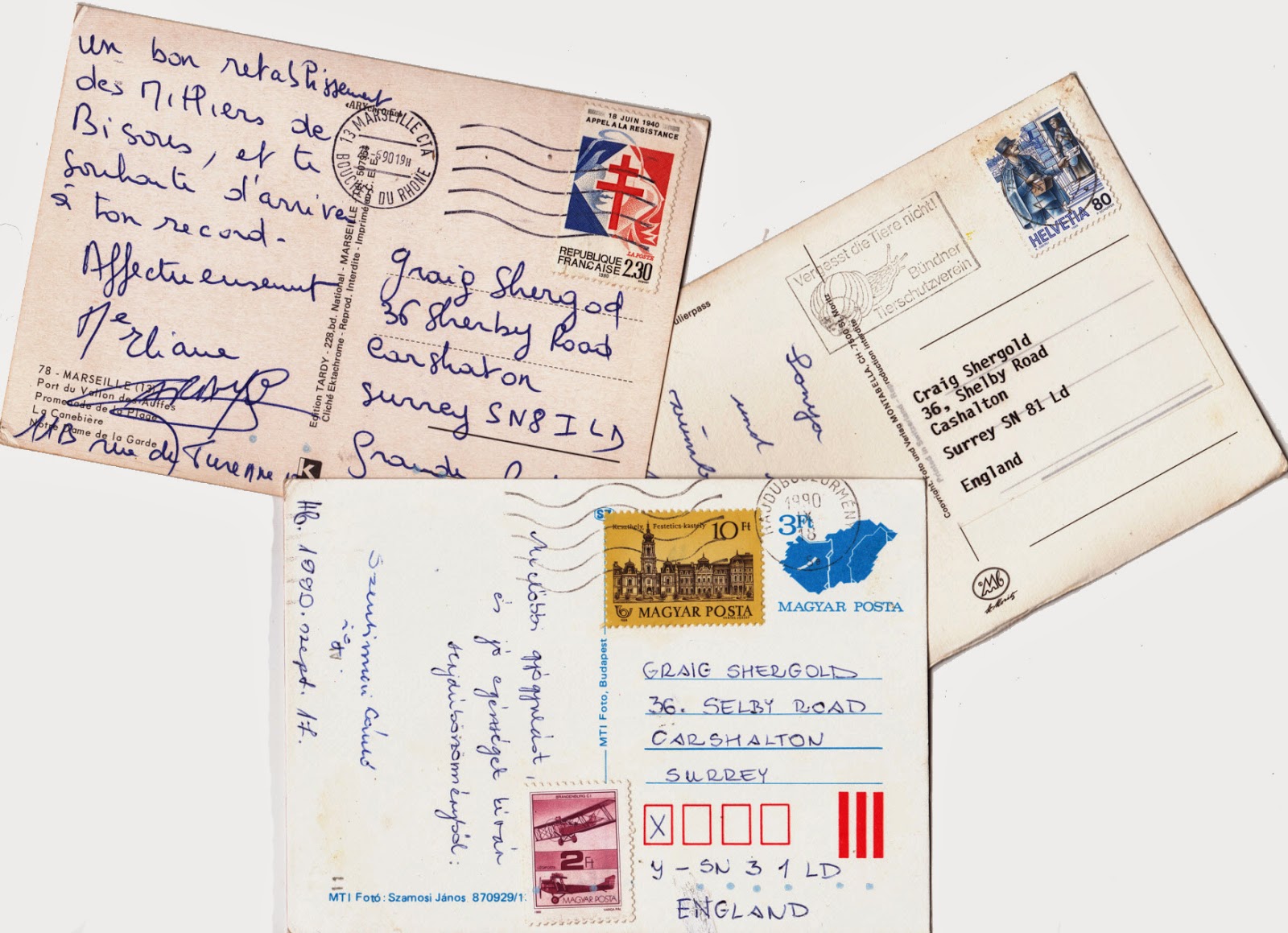 My mind was racing, thinking, 'What on earth are the chances of that?' I thought I might be able to do one of my research projects on this person, but as soon as I googled his name, I discovered his story. As this is readily findable online, I won't go into too much detail, but when Craig was nine, back in 1989, he became very unwell. Perhaps as a way of cheering him up, his friends and relatives started up a campaign to have so many people send him get-well messages that he would get into the Guinness Book of Records. The campaign was a great success and cards began to pour in from all over the globe. By May 1990 Craig had received over 16 million cards and this was duly recorded as a record in the 1991 Record Book. But the inrush of cards had taken on a life of its own and by May 1991 over 33 million cards had been delivered to that address in Carshalton. Wonderfully, Craig had surgery in America that saved his life and he got on with living it, but the cards just wouldn't stop. By 1998 over 250 million cards had been sent to Craig and the Post Office had had to give his house its own postcode. His family asked the Post Office to stop delivering the cards and they moved house. The request to send Craig a get-well message was like Chinese whispers and got corrupted as it went round and round the planet -- so even the three cards I've pictured have variations in the spelling of Craig's name and address.
The cards had become a kind of curse, though no doubt everyone who sent them meant well. He wants nothing more than for the deluge of cards to stop -- the total may be as many as 350 million cards by now.
So it's not such a coincidence that I should own just three out of the 350 million postcards sent to Craig. Cards that arrive for Craig now go straight to recycling. People, it's got to stop!
Posted by Jane Housham at 16:39

This story is simultaneously funny and tragic. What a curse that request turned out to be. I'm not surprised his family moved house after receiving millions of cards.... now Jane... promise me you won't start collecting Craig Shergold cards with misspellings.....

I like Lesley's comment about you starting collecting them! I was thinking we should start a campaign to have postcards sent to you - I'm sure you could make an art project out of millions of postcards!

No No and No!! Let's knock that idea on the head right now!