A friend of GBS -- a photo researched and a curious coincidence... 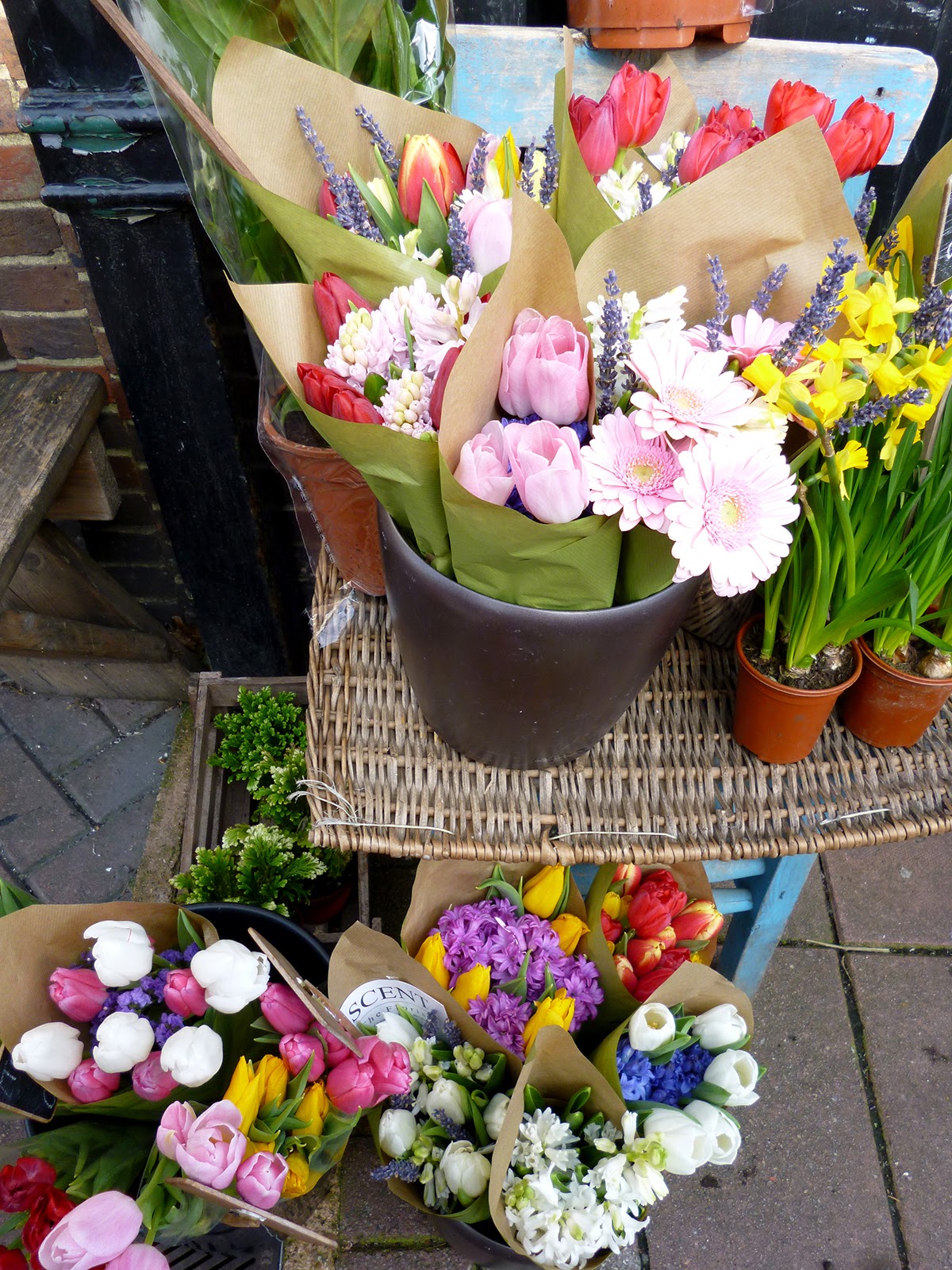 Last weekend I tagged along on a visit to Sussex Uni (for my son) and while he and his Dad toured the campus, I snatched a quick visit to the North Laine. I was with my daughter and it was she who noticed the perfect outfitter's for me as we wandered along Upper Gardner Street market: 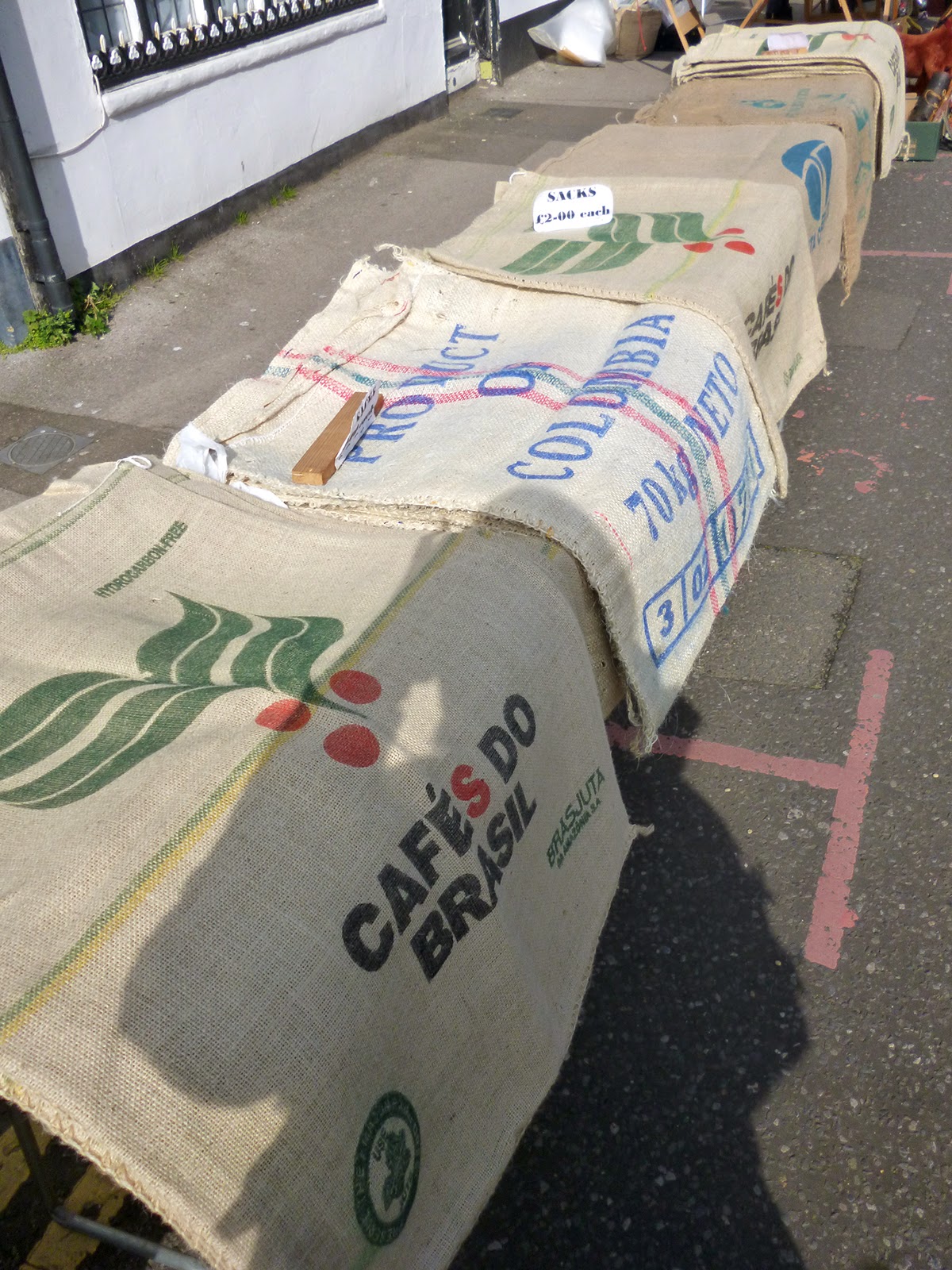 I withstood the ribbing in good part. It was such a lovely day and I was so happy to be back in Brighton. 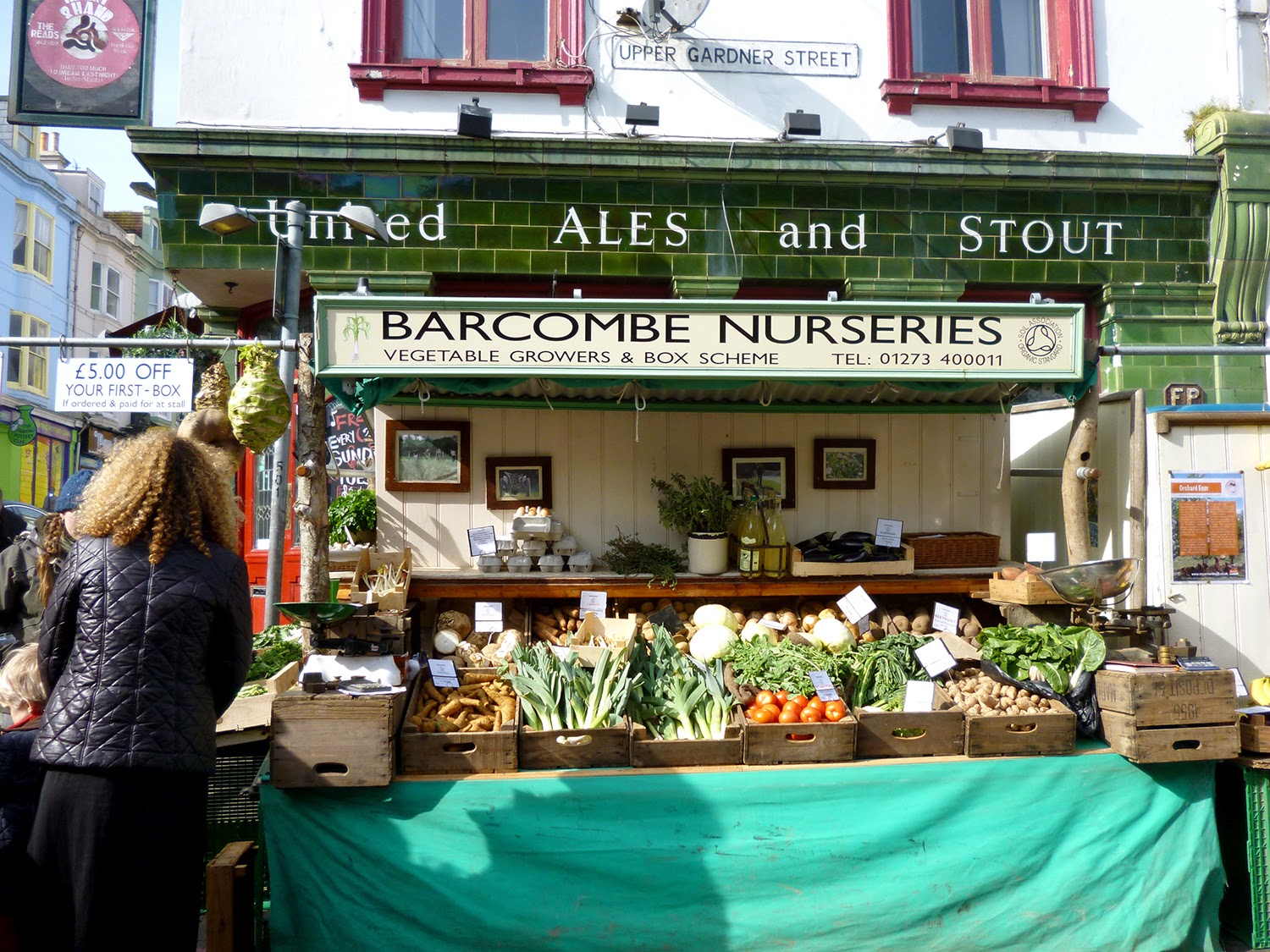 Best of all, soon we came around to my favourite vintage emporium, Snoopers' Paradise. 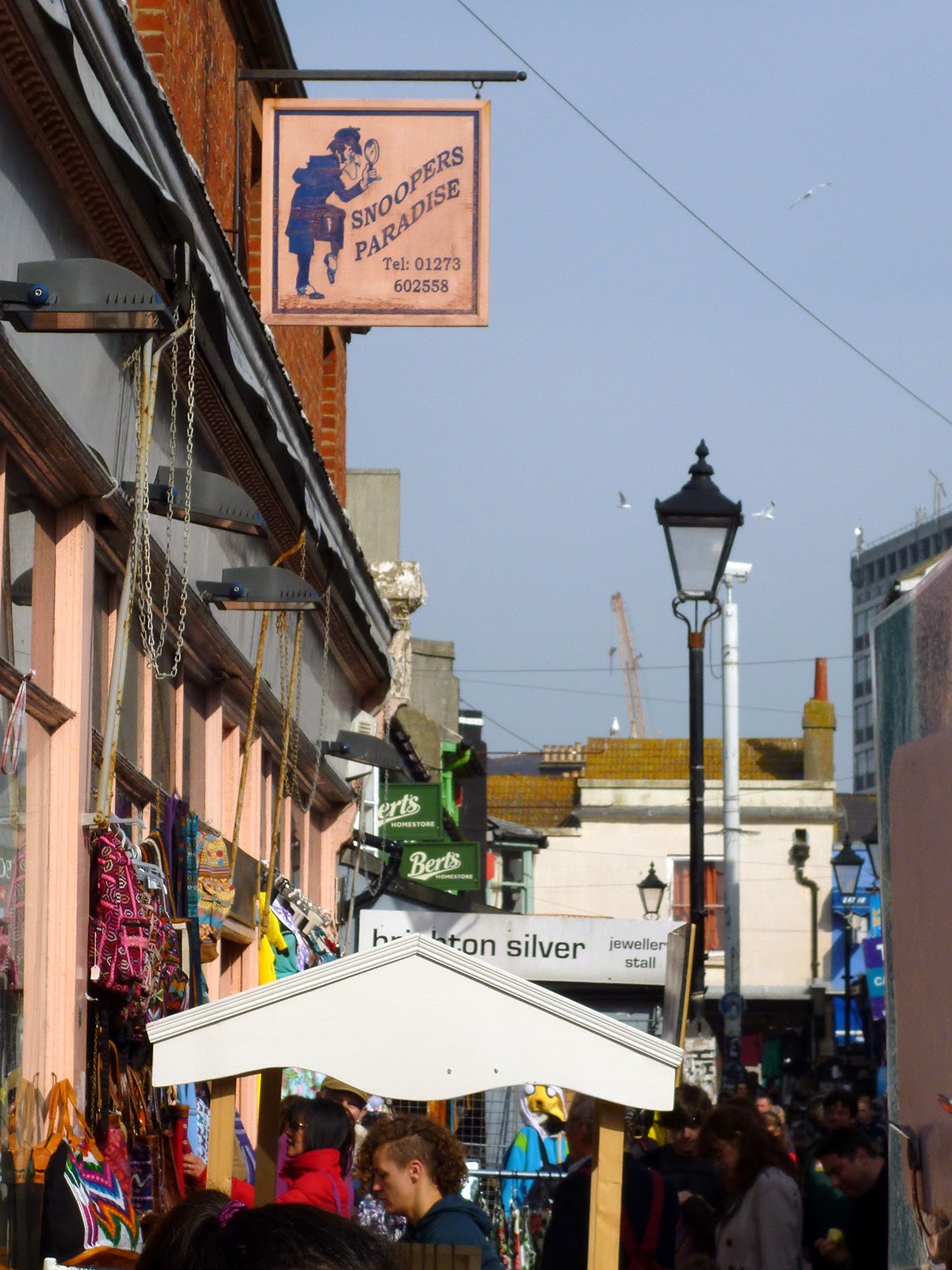 Once again I had had to negotiate how much time I was going to be allowed in there. The time before last, on my own, I had crouched on an old pouffe (as one does) for over four hours, going through the old photos at my favourite stall. Last time was with my son and I only got a measly twenty minutes, if that. This time, in an effort to avoid similar frustration, I had already made it a condition of the whole visit that I would get an hour or so on my own in there -- but in the event it was more like forty minutes, and for quite a lot of time I was being 'helped' by an impatient young person flipping through the photos at high speed. It was agonising as I had just zeroed in on a new set of photos -- dispersed throughout the hundreds in the boxes -- from a single family where the owner had very helpfully written dates of birth and all sorts of other details on the backs. My mind was boggling at the thought of the research I could do into that family! But I ended up scrabbling and grabbing at a few more or less random photos that caught my eye before I was marched away.
I chose one of the photos because it had a name on the back, but it wasn't until a few days later that I worked out what the name was and started to look into it. This is the photo: 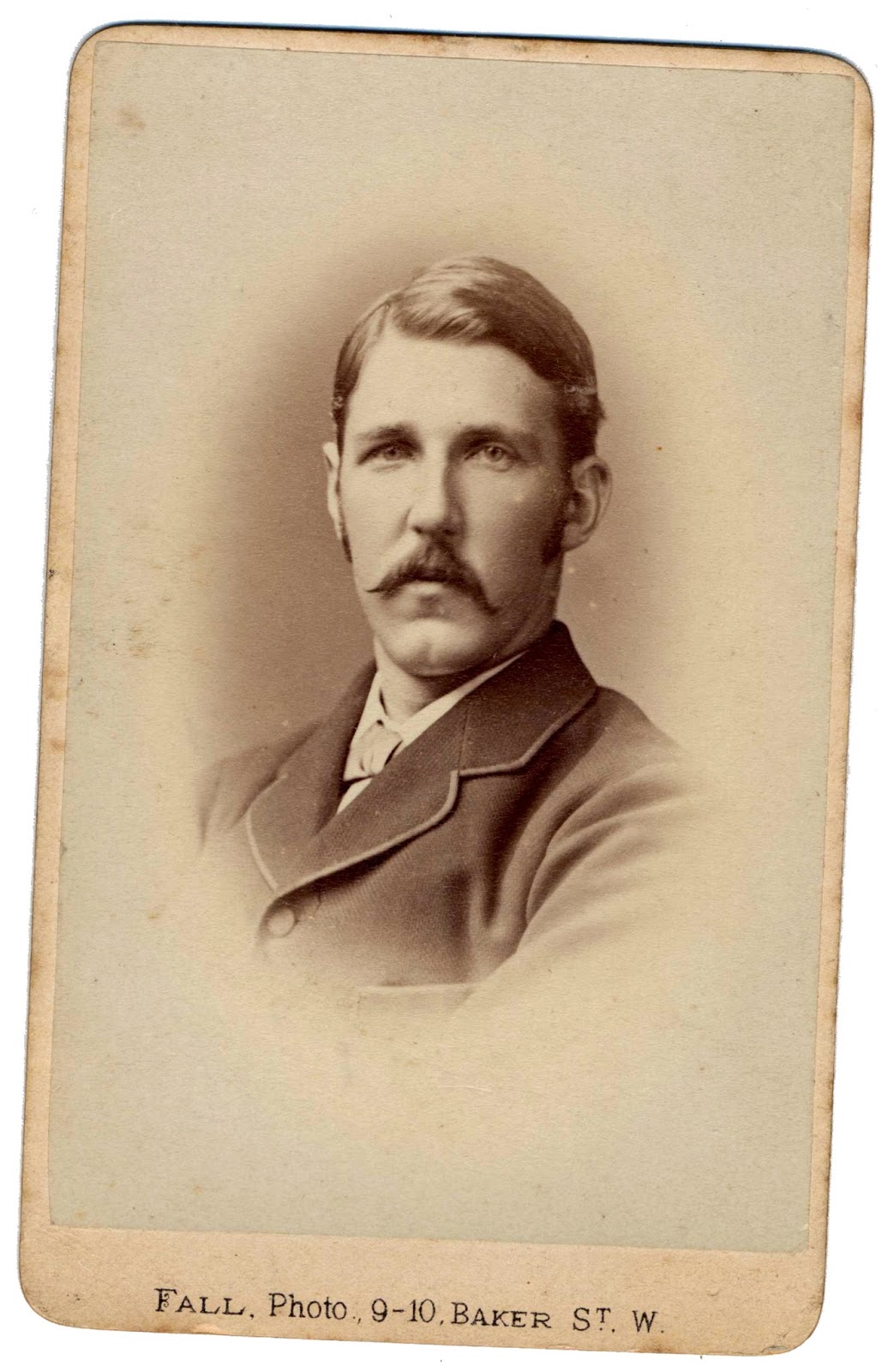 On the back is the name 'J Kingston Barton'. The J is for James. 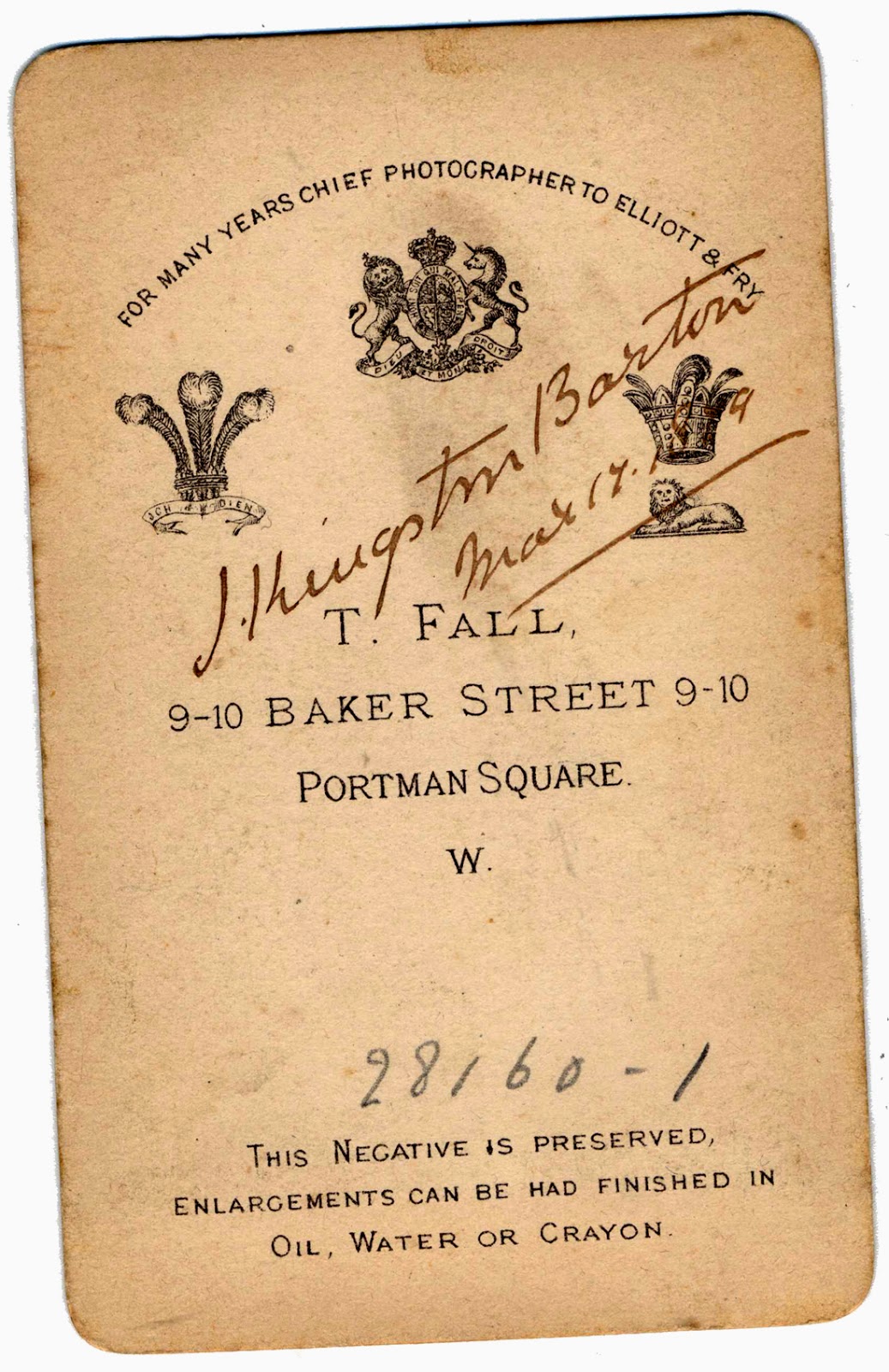 It's unfortunately rather difficult to read the date because it goes over the right-hand emblem but I believe it says Mar[ch] 17 1879. James Kingston Barton was born in Hong Kong in 1855 so would have been a young man of twenty-four at the time. Do you think he looks twenty-four? It's sometimes difficult to tell with old photos. I also believe that his name is written by his own hand: if you compare it to his signature on his marriage banns, from 1891, almost twenty years later -- although the capital letters are a little more flamboyant (amateur graphology bit coming up here), perhaps hinting at his more secure position in society, the other letters are formed in exactly the same way: 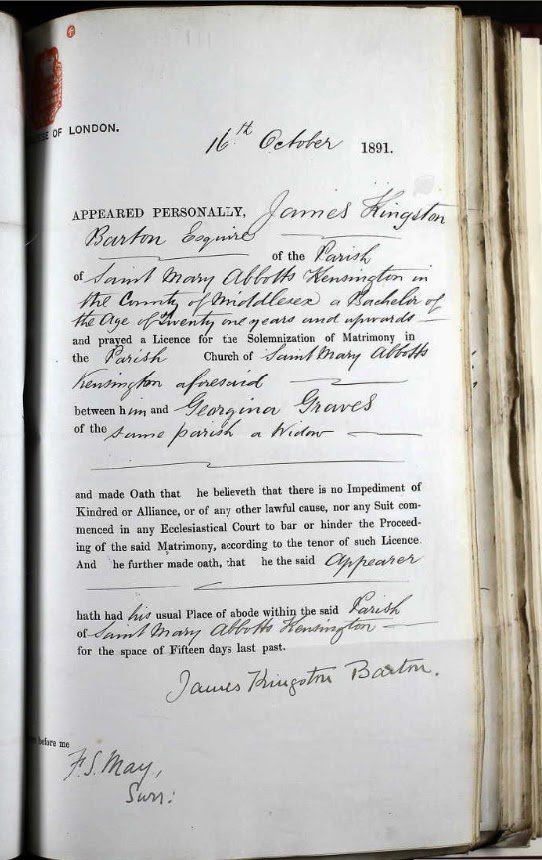 James Kingston Barton's father was an Irishman and a medical doctor who had taken his wife Rhoda out to China in the mid 19th century. Their first four children were born in Hong Kong before they returned, first to Ireland and then to London. The family lived at Chester Villa, 14 Lansdowne Rd, Kensington for a while, then seem to have had a spell in Bedford. James was already training to be a doctor himself by the age of 16 and in 1876, aged 22, he went to Australia. But he did not emigrate permanently  (See addendum at end of post): he was having his photograph taken in Baker Street by 1879 (if I have the date correct) and at the next census, in 1881, he was a visitor at 88 Gloucester Road, London.
J Kingston Barton, as he styled himself, seems to have had a very inquiring mind. His name pops up on late Victorian papers about 'puerperal sepsis in cattle' and 'congenital anaemia' and he is often to be found debating the issues of the day at the Royal College of Medicine. His particular claim to fame seems to have been a close study of the digestive habits of 'kelts' -- salmon or sea trout that are weak and emaciated after spawning.
The most interesting thing about JKB is his close friendship with GBS -- George Bernard Shaw.
Shaw was in the habit of dining at Kingston Barton's home every Saturday evening in the late 1870s and into the 1880s where no doubt the discussion was piquant and wide-ranging. According to Michael Holroyd's biography of Shaw, when Shaw's lover became pregnant she went to see Dr Kingston Barton, perhaps as he would be discreet. And when Shaw wrote an alarmingly frank account of the alcoholism in his own family he sent a copy to Kingston Barton.
In 1891 JKB married Georgina Graves, nee Marshall, a woman who had been widowed just a year earlier. She was Irish and he seems to have been back in Ireland for a time, or at least visiting regularly. They lived for many years at 14 Ashburn Place, Kensington. JKB outlived his wife by 17 years and died at the age of 86. His last home was in a very pleasant private road in Wimbledon. He seems to have left all his money to the Public Purse.

When I discovered that the photograph I had picked up more or less at random on an antique stall was of a man who had been a close friend of George Bernard Shaw I was pleased. What are the chances that a random person will have any claim to fame at all? But there's a further twist to the story...
Today I have been sorting out the old photographs I inherited from my Mum. These are not my family's photographs but a large stash of very old photos that I found in her outside shed when I had to clear her house. They were not kept in ideal conditions, far from it, but were a little damp and covered in gritty dirt. I think Mum must have bought them in a job lot at an auction and perhaps lost interest in them. There were so many of them and I just threw them into a drawer without sorting through them. It was because I've become so interested in old photos that it finally occurred to me that it was stupid to hanker after photos on the stall in Snooper's Paradise, which I can only visit very occasionally, when I had a whole drawer of old photos just waiting for me to look at them. So this weekend I did. There are so many and I have no idea who they belonged to or who they're of. They seem to come from a number of different families. So far I have just sorted them into postcards of places and photos of people and a few other subsets. The numbers are overwhelming and it makes me feel sad to think that I have no way of finding out who they're of (barely any have names attached to them). But I was just putting them away more neatly in boxes when I spotted one of a gentleman. No, it couldn't be... I think it is. It's James Kingston Barton again! 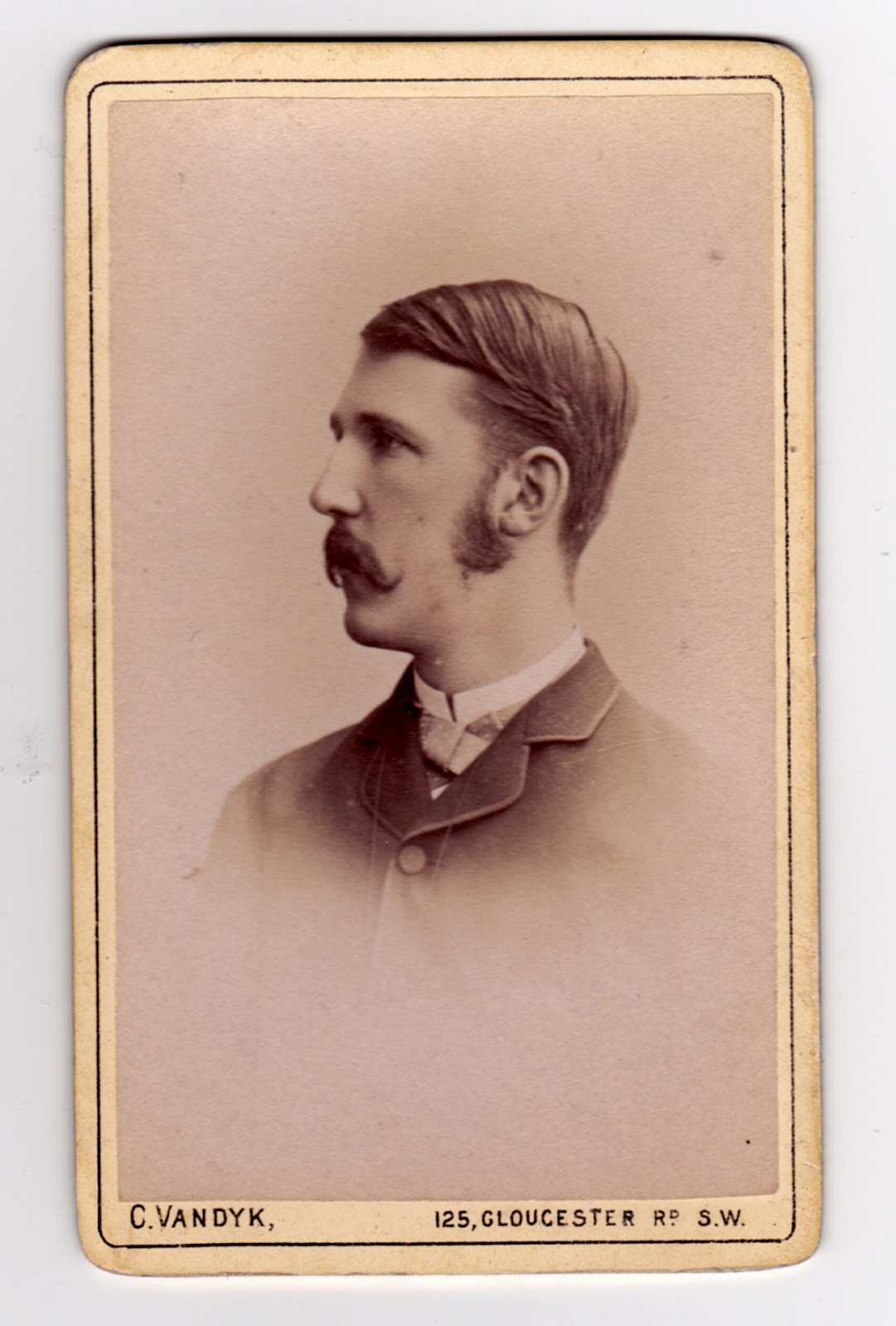 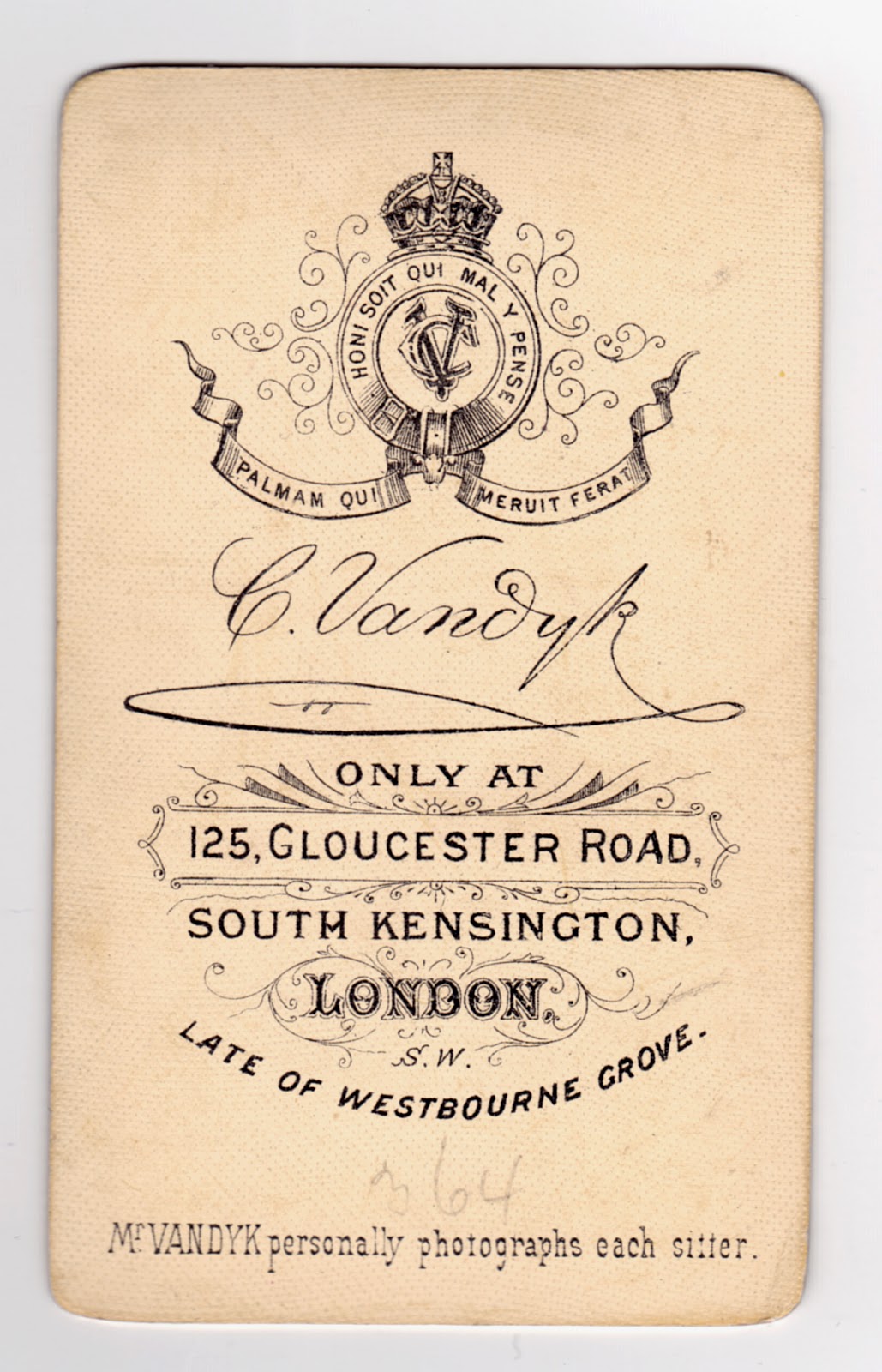 The fact that the photo was taken at an address just five minutes' walk from 14 Ashburn Place clinches it for me. And of course the similarity of his moustache, collar and tie, hair, sideburns. It's him! But what on earth is the probability of my already having (unknowingly) a photo of this chap who I discovered in Brighton? Infinitesimally small! I feel all a-flutter with the wonderful serendipity of it.

ADDENDUM
I mentioned above that James Kingston Barton went to Australia in 1876. Two new things have come to light since I first wrote this post. Firstly, on scrutinising the handwritten manifest of the SS Osyth on which James sailed to Australia, I see that he was not a passenger but rather the ship's surgeon. What an excellent way to see the world!
The other thing I've discovered is that on this trip JKB also went to New Zealand. I know this because, on going through my Mum's old photos, I found a second photo of him in the pile! This one is by the well-known Christchurch photographer Nelson K Cherrill, who in fact had only arrived in New Zealand himself in 1876, having emigrated from Tunbridge Wells (see this very interesting biography of him). 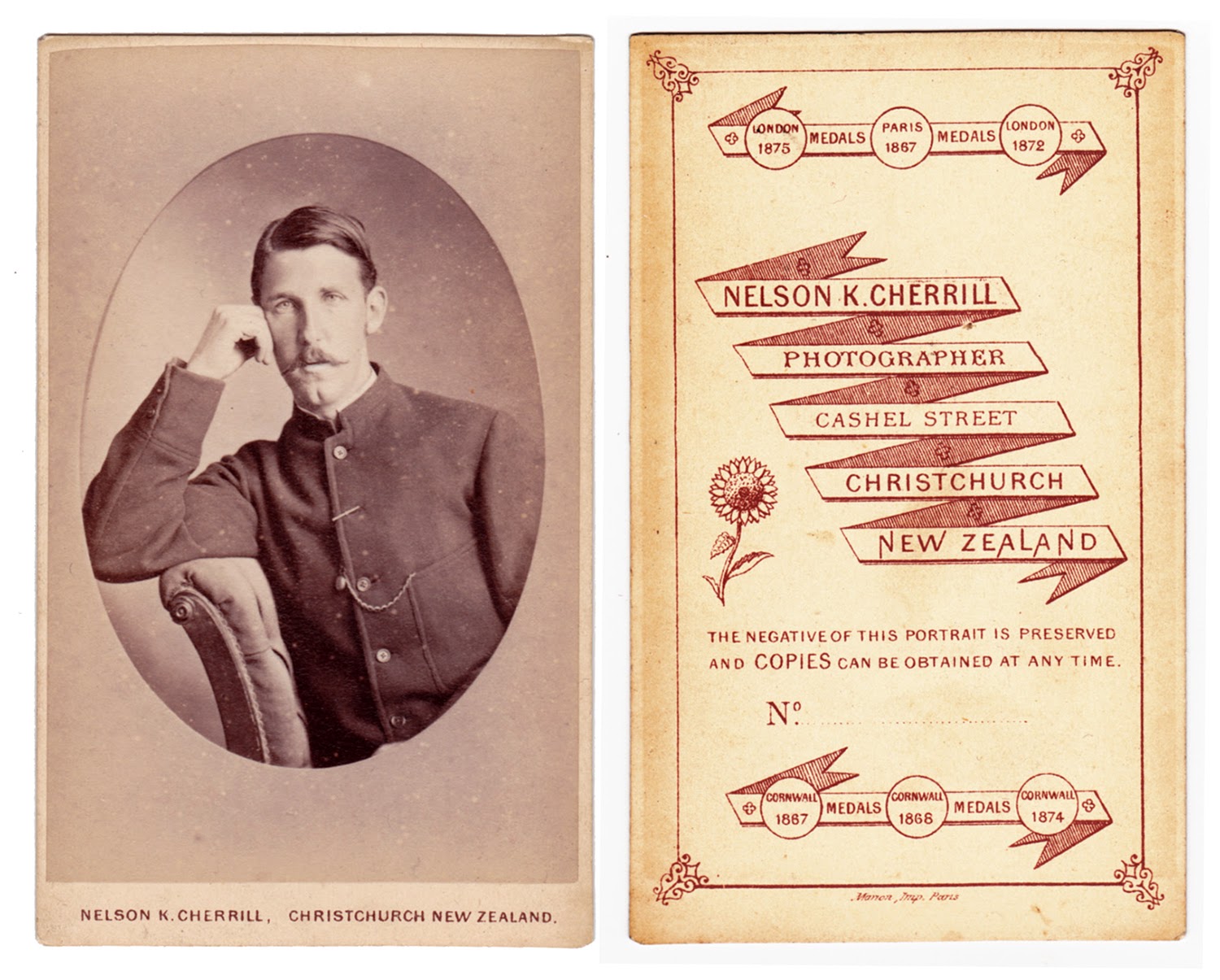 So someone whose photo collection I now own knew JKB well enough to have more than one photo of him. I wonder if it could possibly be Reverend Bott?
Posted by Jane Housham at 00:23

My immediate reaction is wanting to hum the theme tune form 'The Twilight Zone'! That is quite spooky and fate tells me you were destined to find the other photo in Brighton.... unless JKB had a fetish for having his photo taken and there are hundreds of them out there.....somewhere.... a brilliant read as ever.

Another co-incidence.
Browsing art blogs I came across
your blog for the first time and read your fascinating post.
I too am an artist but one of my other interests is genealogy.I love old photographs and am currently using old family photographs in my latest piece of art work.