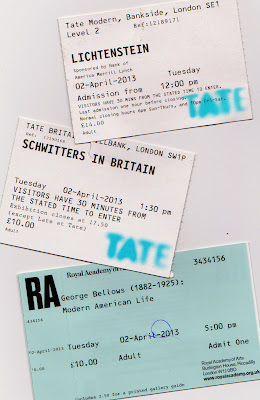 So sorry for the intermittent blogging of late. Lots going on including a mini car crash (a literal not metaphorical one) which took up far too much time to sort out, but you don't want to hear about that (I've just deleted a whiny paragraphy about it...) -- no one was hurt and it wasn't my fault, and it's sorted now.
More interesting (hopefully) was a great day out in London with my son. As I was wearing my pedometer (part of a project at work to motivate staff to be healthier), I know I walked 14,500 steps, all told. Not bad, seeing as we took the tube everywhere, so the walking must have been mostly inside the three galleries we managed to fit in. 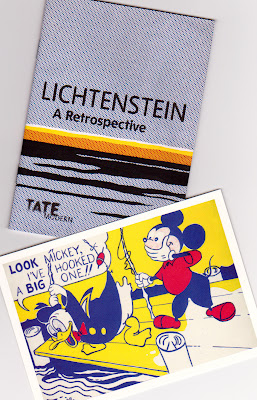 First up was the Roy Lichtenstein retrospective at Tate Modern. I had more or less decided to give this a miss, but my son wanted to see it. I'm glad we went as it was worth it to see Lichtenstein's works at their real size: reproduced in books and magazines, they shrink back down to the scale of the images they are based on and thus lose one important aspect of their 'difference' from those originals. It was great to be able to examine the canvases up close and to see the tiny blobs and flaws that are another of the signifiers of the artist's hand at work (rather than a printing press). I particularly liked the black-and-white scaled-up images of objects from adverts (a glass of Alka Seltzer, a ring, a tyre, a radio...). However, I found myself thinking heretical thoughts.
Firstly, was there no issue with copyright when Lichtenstein lifted the work of comic book and other graphic artists and made derivative works from it? As far as I've been able to find out, none of the artists whose work was 'borrowed' ever sued Lichtenstein. I think the early Sixties must have been a more innocent era when thoughts of copyright infringement perhaps simply didn't occur to people. Since visiting the exhibition, I've looked into this issue online and found David Barsalou's website dedicated to tracking down the originals on which Lichtenstein's works are based and also this article from the Chicago Herald Tribune. Do click on the links (specially the Barsalou -- it's fascinating). I'm afraid my feeling is that the originals are often better than Lichtenstein's versions: they're almost bound to be, because they were drawn freely, from imagination, unfettered by the constraint of having to copy someone else's drawing, which I know from experience can cause the hand to stiffen and become over-controlled. The originals are more alive, somehow, although I realise that's not really the point of Lichtenstein's work, which was precisely to elevate 'cheap' art to the level of 'high' art. In the exhibition, the funny thing was that whenever Lichtenstein dared to wield a paintbrush freely the marks he made seemed so weak and hesitant, completely different from his incredibly confident reproduction-work. Try this one, for example: Washington Crossing the Delaware. Actually, that's not the best example because it's so far removed from RL's signature style. It was the paintings where a stray bit of 'free' painting straggled across a more graphic background that I found more unsettling, and that may very well be the whole point -- to disturb and alienate us. 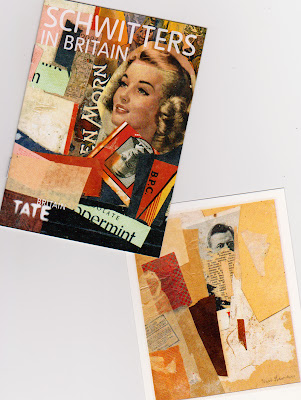 Next it was Tate Britain (but, sadly, we didn't take the spotty river boat to get there) and Kurt Schwitters. It was fascinating to find out that so many German and Austrian emigres had been interned in Douglas on the Isle of Man, including Schwitters who was there for sixteen months. It was ironic, really, (and wrong, I think) that he was denied his freedom in Britain as he had fled Germany in 1937 after the Nazis included his art in their sneering exhibitions of 'degenerate art'. He went first to Norway but the Nazis invaded there, so he fled to Scotland on an icebreaker. The internment camp in Douglas contained many artists and academics and there seems to have been a rather lively atmosphere, with lectures, a camp newspaper and art made with whatever could be put to use: Schwitters made sculptures out of porridge which went mouldy. They ripped the lino off the floors to make lino cuts and scratched drawings into the windows. More on the Schwitters page on Wikipedia. My son found Kurt's endless rather repetitive collages a bit dull and dated. I thought it was a shame they chose the most colourful and cheery one by far for the tantalising poster -- the overall impression in the exhibition was of  brownness (this sounds as though I didn't like them either, but I did -- they quietly told his life story in train tickets and chocolate wrappers). I enjoyed hearing Schwitters performing his Dadaist sound poem, Ursonate ("beeeee bö fümms bö wö tää...") -- see (and hear!) here. One of the most extraordinary elements of the exhibition was a room that had been created by Laure Prouvost, in response to Schwitters' installation in the Lake District, Merzbarn ('merz' was his made-up word for the raw materials of his collages and montages). Prouvost created a surreal tea room with misshapen cups and teapots, and chairs customized with Schwitters-style agglomerations of wood. A film she had made was showing -- she narrated the story of her imaginary grandfather who, we were told, had been a great friend of Kurt's and had received many of his artworks which he had put to more practical use -- as a draining board or a candlestick. It was very mad and funny. 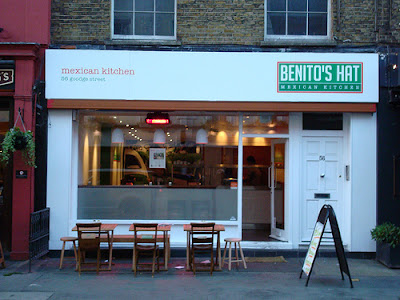 For our lunch we made a pilgrimage to Benito's Hat on Goodge St, a Mexican place my son discovered when he did a week's work experience nearby. I took a photo of our EPIC burritos but they just looked like doughy canisters, completely belying the deliciousness within -- who would have thought so much could be packed inside a tortilla? Amazingly good value too. 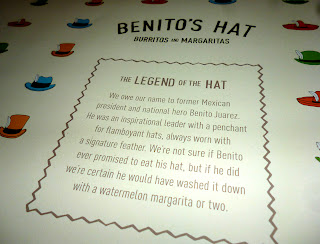 Finally to the Royal Academy to see the George Bellows exhibition. Bellows is not such a well-known artist (not here, anyway) and he's interesting because he seems to bridge the schism between late nineteenth century figurative art and modernism. He died terribly young, in 1925, aged only 37. His paintings of the Lower East Side of New York and, particularly, his visceral scenes at boxing matches show both fantastic draughtsmanship and a feeling for alienated and excluded people in an urban context that reaches towards Edward Hopper (born in the same year but lived 30 years longer). 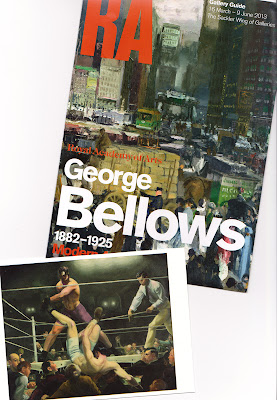 So sorry to hear you were involved in a car accident - always shocking whatever the circumstances and whoever is involved. Always expensive too, whoever is to blame :(

I went to the Schwitters exhibition and ADORED it, although unlike you, I didn't really appreciate the Prouvost room. I wanted to hug his collages, I loved them so much!

Hope and I are going to the Lichtenstein exhibition tomorrow, and I'm really looking forward to it.

We were hoping to go to the British Museum to see the Pompeii exhibition but it's fully booked (I guess I should have realised!!).

I too loved the Schwitters exhibition. He was a fabulous painter - I thought those two portraits, made when he was interned on the Isle of Man, were extremely moving. The collages were fascinating and made me think a lot of the ephemera we dispose of - those lovely old bus tickets for a start, and the sweet wrappers. I think they appealed to the quilter in me, the thought of using up scraps of this and that.

I haven't seen the Lichtenstein yet but will go - I ldo like a late Saturday night at Tate Modern, though it seems to be busy even then.

Hope mentioned the BM. We went to the Ice Age exhibition recently and it is amazingly moving and enchanting.