A day trip to Brighton

This was the (slightly 'Shopped) view at my feet as I waited for the 9.20am train from Luton yesterday morning. I had had to give in to an insistent voice in my head telling me to go back to Brighton again. Brighton looms nearer because there's a wonderful direct train from Luton that takes you there in two hours, right through the heart of London. Unfortunately, I only discovered after I'd bought my ticket that the 'through' part wasn't working this weekend so I had to cross London by Tube. Still, by noon I was in the North Laine (and the rain). 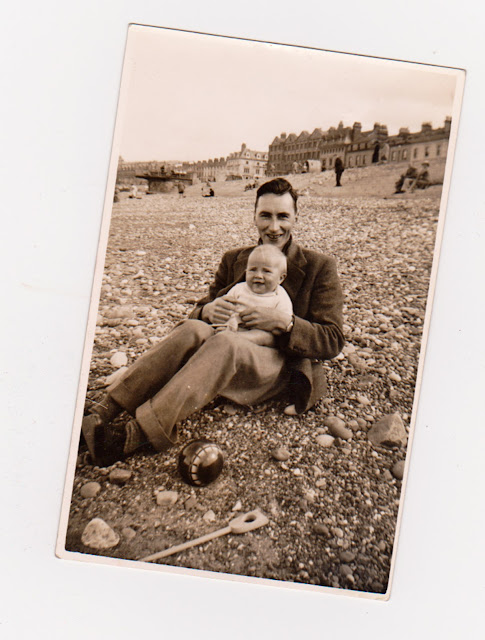 It didn't matter. I wasn't there to sit on the beach (unlike this lovely pair, found yesterday). I was there to feed a terrible hunger that's been raging in me for getting on for two months now. You may remember that, last half term, I went to Brighton with my family and got to indulge my love of old photos with an hour in Snoopers' Paradise. I think I bought five photos that time. One was of Lionel and Ethel Long and I managed to find out a little about the Longs, as reported in this post. Two of the other photos I bought that day turned out to be related to each other. I started to research the family in them and it exploded into an almost full-time project. I haven't been so absorbed by something for a very long time. I'm not quite ready to tell of my discoveries -- I'm waiting for a book to come from the National Library of Australia! Luckily I can arrange international loans through the Uni where I work. The book is going to be the culmination of the whole thing (I hope) but meanwhile I thought I remembered that there had been other photos from the same set that I'd left behind in Snoopers' Paradise. 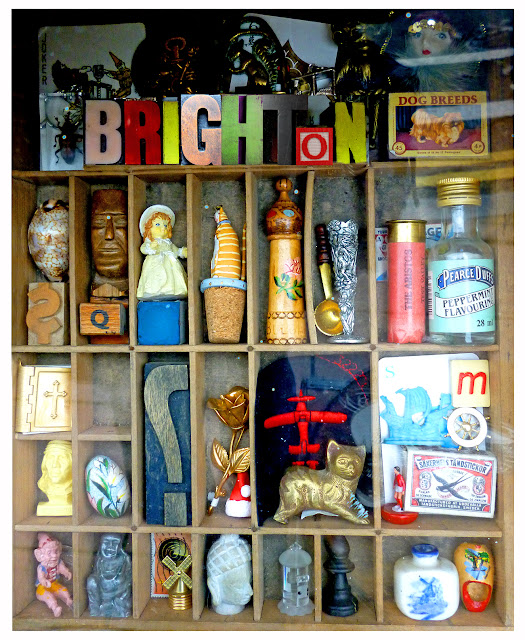 There had been about 2000 photos in three or four boxes at the stall where I got the first ones and I had only had an hour. Now that I had got so intensely engaged with the family in the photos, I just couldn't bear the thought that there were more photos of them left behind. I had to go and see if I could get them.
I went straight to Snoopers' Paradise and made for the stall where I remembered standing to look through the boxes of pictures. Nothing. There were no photos at all! I can't describe how desolate I felt. I thought some of them might have gone, but surely not all of them. I hunted all over the stall, in drawers, behind old fire screens, in cash boxes. Gone. Then I rallied myself and thought I should at least check around the rest of the flea market -- perhaps people own more than one stall and move their stock around. At the very least there would be other stalls with photos, even if they weren't my special ones. I couldn't leave empty handed. So I spent an hour or so going round the whole place. I didn't find 'my' photos but I found a few other nice ones, including the beach scene at the top. I went to pay and to interrogate the people on the till. 'Can I contact one of the stallholders, please? I came specially to get some photos and I can't believe they've all been sold.' They rolled their eyes and said, 'No.' The woman said, 'There are lots of other stalls with old photos, I'm sure you'll find something you like.' I couldn't explain how I felt that my 'photo family' needed to be kept together and that those photos were saturated with meaning now. They'd come to life. 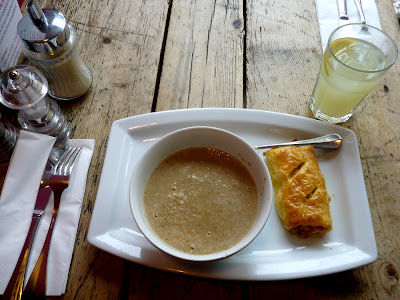 I went back out into the rain and got some lunch -- the £6 special at Soup-Urb -- pretty nice. The piece of rocky road I had for pudding was the best I've ever had. I sat looking out of the window at the rain and I thought, 'I can't just go home. I'll go back to Snoopers' Paradise and I'll look round with my "kitsch" eyes on instead of my "old photos" eyes. There must be something cool in there.'
Back I went. It was more like a fun house in there than a flea market -- everyone was trying on wigs and hats and taking photos of each other: 'Try this coat on, you'll look just like a pimp!' I wandered round and within a couple of minutes, I have no idea how, I'd found the stall with the boxes of photos! There they were, still thousands and thousands of them, all jumbled up. What with misremembering which stall it was and then missing it on my first trawl, it's a miracle I found it at all. I was so happy. I hunkered down on the floor and went through each box systematically to sort out the ones I needed. Very thoughtfully, 'my' chap had numbered and dated all his photos so it was easy to tell which ones were his. And I know his handwriting so well now -- I've matched it to his 1911 census return. If anyone had been watching me (I'm sure no one was remotely interested) they'd have seen me going through box after box of photos looking only at the backs. I found TWENTY more of 'my' photos. Some of them are very blurry or don't have any people in them, but I bought them just the same. I had to reunite them as much as possible. What's hard to bear is that the highest number on the ones I've now got is 'No. 442' and I only own 22 in total, so I don't like to think about where the other 420 have got to. I wonder if I'll ever find any more of them? Probably not.
I was in Snoopers' Paradise until almost 5pm, just sorting through photos. By the time I left I was so stiff I was reeling. I just went back to the station and caught the next train to London. It was the strangest day out I've ever had but I have assuaged the need I had to see what was still to be found.
I'm keeping schtum for now on the story I've managed to find out, but will just show one of the photos I got yesterday, of the daughter of the family -- blurry but lovely, I think. More -- much much more -- to come... 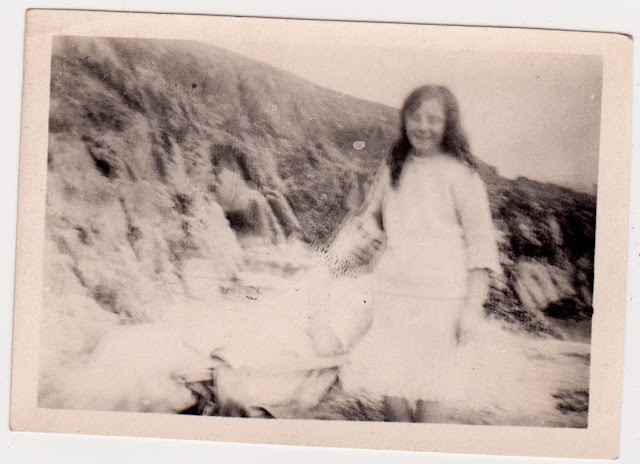 This is such an exciting saga, I can't wait to find out the result of your investigations. Well done for finding the photos - try not to dwell on the photos you don't have and just think of the 22 that you do.

I am planning a trip to Brighton during the summer months, Snoopers' Paradise will definitely one of the places I'll be making a bee-line for!

Can't wait for the next instalment.

That blurry photo - just like memory, an inkling of emotion and a sense of the fleeting nature of passing time. Really lovely.

Twenty two is a very nice number ( I have a thing about double/ triple etc numbers). This is all going to end well, I feel.

By golly, but you have got tenacity Jane......... well done for not giving up and like the others I can't wait to read the next instalment!

Longing to find out what happens next now!

I can imagine the adrenalin rush when you went back for the second visit and found the photos. I was hyperventilating just reading it with you!It all sounds mysterious and exciting and I know you... there will be something amazing at the end of this tale. Can't wait. x