Do you like watching webcams? There was an exciting, almost Truman-Show-style moment earlier this week when, after weeks of complete inactivity (during which I was worried the people had actually moved away), human beings appeared (for the first time ever!) on the screen of the Sarasota Swimming Dogs webcam and looked into the camera and waved! I managed to grab a screen shot just after the wave. There was, momentarily, a sense of connection: me in rainy Hertfordshire, these guys in sunny Florida. The Sarasota Swimming Dogs webcam is one of my absolute favourites because it's on such a human scale -- most webcams just show matchstick-sized people coming and going indifferently. Here, if you catch them, the dogs come out to play: 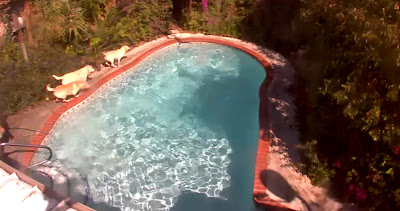 The best time to see them is usually between around 3pm and 4pm UK time (more details on the webcam site).

I really love webcams -- but only ones with live streaming. It has to be a real-time picture with moving creatures on it -- preferably human but animals can be very engaging too. Or even jellyfish (really beautiful, actually): 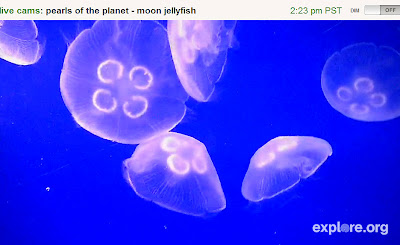 Or how about microbes wriggling about? 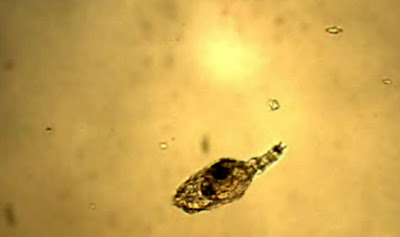 There seems to me to be a huge difference between a live feed and a still picture, however frequently it's updated. Even if you're only looking at trees and water, as soon as the wind begins to move through the leaves and the water to ripple, you're there. It is truly a window on the world.

One of my favourite webcam sites is the Mila I Beinni site in Iceland which has a number of cams trained on beautiful places in Iceland. The weather is so tumultuous that some of the cameras are often offline or clogged up with snow but I've seen some breathtaking mountain views, and the Blue Lagoon with its bobbing swimmers is always entertaining: 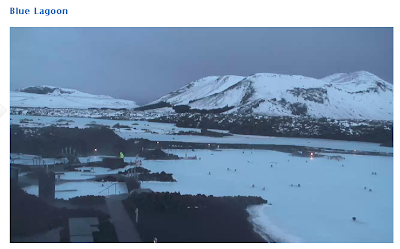 What would possess someone to set up webcams all over their home? Perhaps so they themselves can keep watch when not there. But there's something quite odd -- and fascinating -- about being able to see into this house: 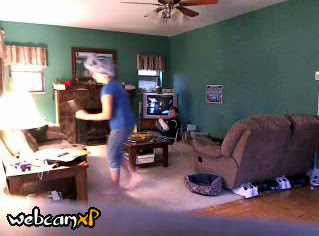 Here are some sweet animalcams (links in the captions):

These Shiba Inu puppies are also very sweet but their camera was offline when I was preparing this post. There are also some sleepy chinchillas here.
What I really wanted to find were some artists at work -- there are quite a few webcams to be sought out, but of the ones I've found, either there was no artist to be seen or I really didn't like the look of what they were doing! But some links are here.

Enjoy your watching.
Posted by Jane Housham at 09:07

Wow, what a world I never knew existed. I love the idea of being able to see Iceland. I was thinking about your post on sleep patterns. In medieval times it was thought unusual to sleep all night. It was normal to get up in the night and eat etc we think it bizarre for a monk to rise at 4am to pray but it was more normal. It's become a social norm to sleep for 8 hours quite recently but then you probably knew all that by the sounds of your late night research. Sometimes when I wake at night I really enjoy that my mind can wander where it wants and nobody needs my time. When the kids were very small it was my time to think my own thoughts without being interrupted.
Jo

Jane, the whole webcam area is somewhere I don't venture. I'm not sure my connection would be up to it and I don't think I'd better find out. I already lose too many hours in the day to the virtual world. I'd better not start getting involved in something else!

I have lurked over a few webcams in the past and have found them addictive. There is something fascinating about watching people from around the world who are totally unaware they are being observed - when I first got the internet I spent ages connecting with a webcam at an African waterhole waiting for lions to come for a drink - they never did!
Luckily I usually sleep like a log so no nocturnal distractions needed.

Gosh, how fascinating. I don't think I've ever seen a webcam!

Fascinating stuff! Like Lesley, I know I could spend hours watching this kind of thing, but I can't afford to!

Belated comment, sorry... Have you watched the CIA thriller series 'Homeland'? Webcams used to good effect in that, though nothing quite so hilarious as badly behaved puppies... You should do a 21st Century Insomniac's Handbook, it would go down a storm