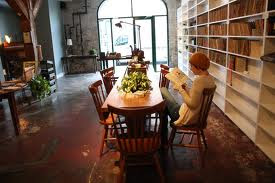 I was just about to leave work on Friday evening when I got a text. It was from my friends and colleagues Karen Pine and Ben Fletcher and it said that they were at the Brooklyn Art Library (above) and had just been talking to the people there about my sketchbook. This brought about one of those rare moments of connectedness -- I'd sent off the sketchbook back in October, thinking, 'Ah well, it's gone now but it was a good thing to have done,' and now people I know were across the Atlantic talking about it. Okay, enough already, but it made me very happy. 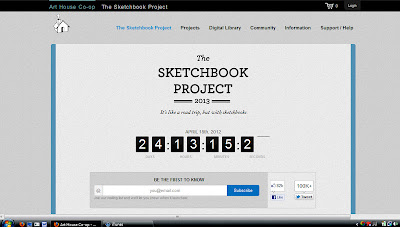 Then I went onto the Sketchbook Project website (still only one comment on the page where you can see my sketchbook images so not exactly setting the world on fire just yet -- got to keep things in perspective!) but was stunned to see that the 2013 Project kicks off next month -- they're already counting down to it on the homepage (above). Am I going to do it again? I'm not sure -- it was soooooo much work and I've got a ton of other things I want to do in the coming months, but I'm still seriously thinking about it. I might wait until the tour comes to London and then go down and see what 'vibes' I get. Are you going to do a sketchbook this year?
Well you may have noticed that I haven't been posting very frequently lately, which I regret, but I've been really busy with things that haven't really been bloggable. However, I can post a picture of a painting I've just done for my mother-in-law's birthday which is based on a photo of her as a little girl with her parents and a beautiful dolly. We're going to give it to her today so I do hope she likes it and feels I've caught everyone's likeness.
Something else that has been capturing my attention is my first commission. This is also thanks to Karen and Ben, who really are exceptionally encouraging and supportive. They've asked me to do their portrait and I'm currently in the early stages of something I hope they'll like. I'm not going to say too much about it here as it's their private commission, but the whole thing has gone to a new level since I went to their home to take some photos of them which I intended to use as references for a double canvas (ie one image split across two canvases -- I'm exploring the idea of their strength and unity as a couple). However, while I was there they showed me all the art they've collected and we talked about what they find exciting, with the result that I came away thinking that a conventional painting wouldn't do. I have quite a few ideas, one of which is ahead of the rest at the moment, but I'll keep it all under wraps for now. 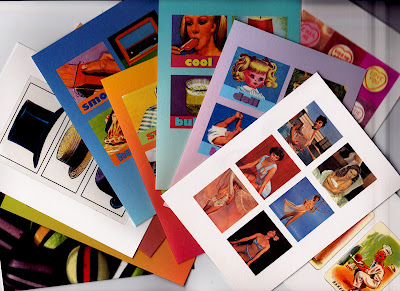 What else can I tell you? I'd really like to grow my blog, so as soon as I get to 50 followers, I'm going to celebrate with what I hope will be a nice giveaway -- something special for the first name/s out of the hat, but also a selection of my Housham Home card designs (above) for everyone who leaves a comment, no matter where they are in the world. So I just need two lovely new followers to trigger that all off.
Did anyone see the new reality show on Channel Four last week, Get Your House in Order? I did and found myself shouting at the telly like my granny used to at the wrestling on a Saturday afternoon. Pretty Amie did seem to have a problem with accumulating too much stuff -- she and her fiance Ali were having trouble finding their bed amidst the chaos. So the programme sent in two bruisers who stripped Amie and Ali's house bare apart from the bed, sofa and telly (it looked like). They took all their stuff (or rather just Amie's stuff -- it wasn't clear what happened to Ali's as he was not the 'guilty' party) and arrayed it in a warehouse. Then they took A & A to see the huge quantity of stuff that had been packed into their house. True, it was incredible. Then they gave Amie a modest rail and told her she could only 'save' what she could fit on the rail. She wept as she gathered as many pairs of shoes as she could carry, then festooned the rail with handbags, hair straighteners and clothes. The next stage was that everything else was sold off in what was essentially a pop-up charity shop, but the charity was money for a makeover of A & A's house -- the reward for Amie's big sort out. Poor Amie had to sit at the till of the shop and put her own possessions into carrier bags for people who had paid one or two quid for her things. As a person who feels, rightly or wrongly, 'defined' by her possessions, I found it almost impossible to watch this stripping bare of Amie's life in objects. I might not share her taste but I shared her pain, I really did. It really annoyed me that the only people there to look after Amie while she went through this trauma were the guy who was basically a house clearance man and the interior designer who would be doing the makeover (not the finest, I thought) -- oh, plus ghastly Jane Horrocks doing the voiceover and giving us contradictory tips on how to buy designer shoes and so on -- I'm sure she only got the job because of the incredibly ANNOYING way she pronounced 'hoard', which the script called for her to say every three minutes. If poor Amie had a real problem with over-accumulation of belongings (which she well might have done -- and from the sneak preview of episodes to come, it seems that future 'targets' are even more seriously afflicted), then there should have been some element of counselling and support for her, not just ripping all her things out from under her very nose. Ooh I was cross.
But do you think I might have the same problem....? 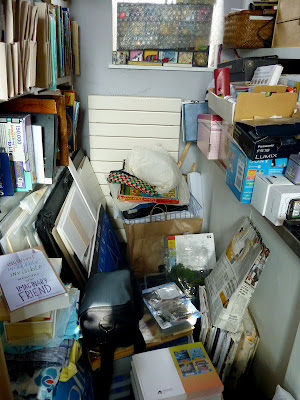 One down, one to go as I've followed you! I don't think I was already a follower. I've come up as an egg shape - no photo, alas. Wonderful that you are making progress with your work.

The TV programme sounds fascinating and ghastly in turn. I used to see regularly one of the works associated with Michael Landy's disposal of his worldly goods and have often thought of the fortitude you need do that. So drastic though. Surely baby steps to getting rid of stuff would get you there in the end, or at least leave you with some comfort.

Hi Jane, thanks for mentioning our Brooklyn connection - Ben and I were mooching around Williamsburg (having gone in search of a fab cafe for breakfast called Egg, where I had, guess what? eggs) and a lovely guy in a funky craft shop (called Trash-a-Porter!), reworking bits of recycled cashmere into gorgeous goodies, told us to head down to North 3rd Street. There we'd find, he told us, a 'place that looks like a library but sells really cool stationery'. Being a stationery fetishist I was off like a shot. Got a bit distracted by an awesome chocolate factory and cool book shop before wandering into the Brooklyn Art Library and noticing the shelves groaning with sketchbooks. Thousands of them! They are the 2011 project and, with one of their special library cards (I'll bring you one back, it'll be useless but I felt you should have one!), anyone can take out four at a time and sit and browse through them. Yours will be there next year, of course, and in the 2012 collection that goes on world-wide tour soon and comes to London in October. Can't wait to see it :O) They also have a self-portrait project on at the moment, they send you a 4x4" canvas and you submit your artwork. Something else to think about? Hope the 'other' portrait project is going well! Karen.

I have added myself to the following list. I follow you on google reader but it does not show up on the followers thing. I tried to look at your sketchbook but couldn't work out how to do it. Just me?!

Hi l think you have made it!! CONGRATULATIONS!l often pop by for a read when l visit menopausal musings and click on her link..SO reading you wanted 50 and the total was standing at 49 !!l went for it! because l always like what l read here .x

In the land of coincidence, the last post I read on my short list of blogs I follow was also headed This and That! I don't follow that many blogs but yours is a must so I'm glad there at now at least 49 other people who know what a treat they have in store for them. Aways guaranteed to tell me something interesting and raise a smile at your singular take on the world. As for that gift for your mother in law... it is fabulous.Guaranteed to be a winner I suspect.

I just noticed all those typos in my comment. Sorry Jane. I'm having one of those rare sleepless nights I told you I don't have!! Blame the spelling on a tired brain that won't slow down tonight... or should that be this morning?

I always love your posts, Jane, and often come back again and again to read the same post. My daughter and I adored the webcam post, but have yet to see any swimming dogs. The penguins were wonderful!

Anyway, wouldn't it be WONDERFUL to live near the Brooklyn Art Library?! My husband would always know where to find me, that's for sure! I'm sure your Sketchbook is causing something of a stir - every so often something very special comes along, and your Sketchbook was certainly VERY special. I will, more than likely, take part in the 2013 Sketchbook Project. I just can't resist them. As you know I did 2012's and I'm just finishing the Limited Edition Sketchbook (and I've still got 5 weeks to go, so I'm rather pleased with myself).

The painting for your MIL's birthday is, again, really very special and will be received as such. Lucky lady!

x
ps maybe we could meet up at the London Sketchbook show?

Yay!You've reached 50! I didn't know you could see and comment on the sketchbooks, so I'll go and see if I can do that. I'd love to see you do another sketchbook, but I guess it depends on whether you have time. I might even consider it myself this year, now that I've seen the process.

The painting is great. Your husband's grandfather (is that right?) looks so jaunty and a bit cheeky. Funny how one interprets a stance.

I saw the start of that programme, but I was busy with other things and was not enticed to watch the end, for all the reasons you've described. (Someone else who thinks Jane Horrocks is ghastly - yes!) There used to be a similar programme on BBC with Dawna Walter, where at least you felt that the hoarders had been helped, because she was so sympathetic. (Despite the use of a shredder.) So long as you can use all your rooms in some way, and get to your clutter, where's the problem? But then I would say that, wouldn't I?

Like the others, I am going to wander over and take a peek at the Brooklyn Sketchbook site.

What a wonderful painting you have done - I am sure the recipients will ADORE it!

Re the decluttering....... I am trying to do a bit myself at the moment...... but its hard. I cannot imagine ever being brave enough to let someone else loose on it!