I'm very much enjoying the self-indulgence of photographing some of my bits and pieces and putting them into this blog. I hope you're not getting sick of the sight of these pictures. I had yesterday off work and I'm also at home today and tomorrow, for half term, so have got more time than usual to indulge. It should be unalloyed pleasure ... and yet...
Take these boxes, above, for example. Some of them were on the table in the back room where I sit to make stuff. Some of them were stashed away in boxes under the sofa in there. Two were in drawers -- different drawers. A couple of them I'd forgotten I even had. Still, here they all are together in a nice lot. But, no sooner had I uploaded the image than I glanced up and saw two more nice boxes literally in front of my eyes on the shelf above my desk: 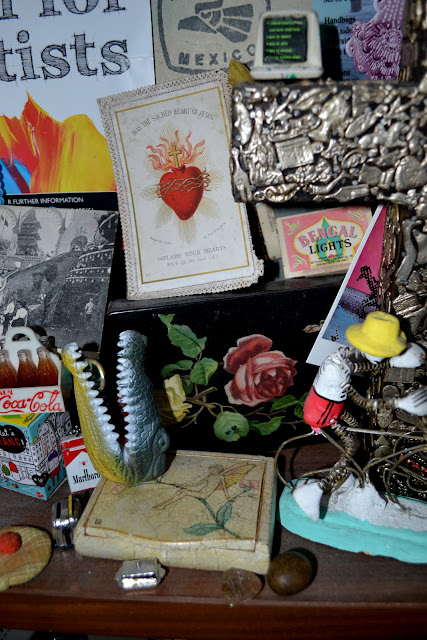 Can you see them? One's got a fairy on it and one's got decoupage roses. But I'd completely forgotten about them. Can you also see the DUST? And all the other nutty stuff, which is actually LESS than normal because I took half of it into the other room yesterday to photograph it?
The problem is that not only do I have no idea where anything is but I don't have any real idea of what I've got. It makes me feel very rocky and unsettlingly vague. One obvious answer would be to have a massive sort out, throw lots of things away, and start afresh, hopefully able to retain the knowledge of what was left. But I can't see myself doing this because I feel such attachment, such affection for all these stupid things. Most of them have no monetary value whatsoever, but I really love them, specially if I've had them for a long time. And trying to sort it all out just brings out the obsessive in me.
I've already posted the seahorses, but yesterday I had to rephotograph them because I'd found one more tiny one and it was so sweet... 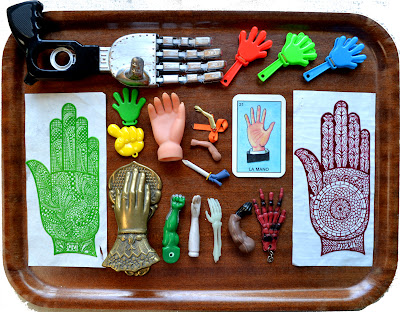 Then I HAD to redo the hands as well because I found lots more as I was paddling round in all the mess. THEN this morning I found two more small brass letter-holder hands but have so far managed to resist the urge to do them all over again. But it's really annoying me that they're missing. 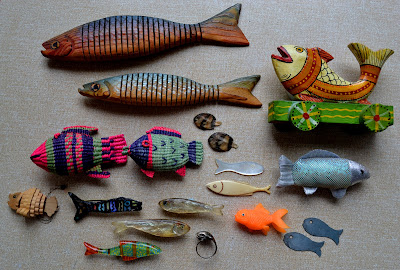 And what do you do about objects like these fish, which are mostly hideous and ill-matching. I only really like the one on wheels (which I love). The rest are just ... there. So should I get rid of them? I realise now that I'm contradicting my declared special love for all these things, but what it shows is that it's given or withheld according to unknowable rules. Take these monkeys, for example -- I love these: 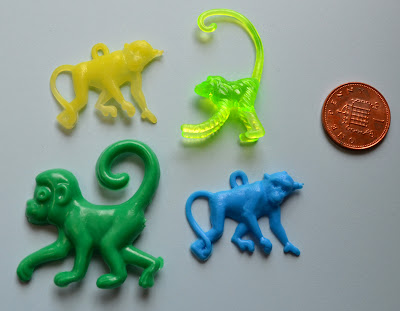 But why? No idea. I love these robots too: 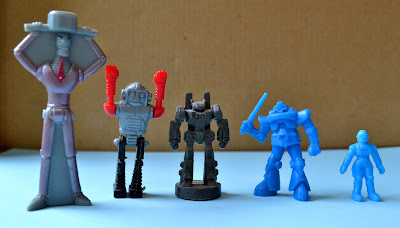 The problem is twofold. One is that I 'collect' so many things and then, on top of that, am a de facto collector of things that just happen to have arrived in the house one way or another and are just asking to be taxonomised.

The things I actively collect include:
But I also collect, unofficially:
That's not even counting some things that my husband collects and I don't. Madness, no?
The other problem is storage and organisation -- lack of both. There are boxes of things in every nook and cranny and none of it is ordered or catalogued in any way -- well, you wouldn't really do that, would you? When we moved down south from oop north a decade ago we moved from a house quite a lot bigger than this one we live in now -- the exchange rate on those Northern Pounds isn't too good. We had one and a bit pantechnicons of stuff. It was terrifying. Most of the stuff we haven't got room for is now crammed into our loft and I quite often lie awake in bed and wonder when the ceiling is going to come down on us... Help! 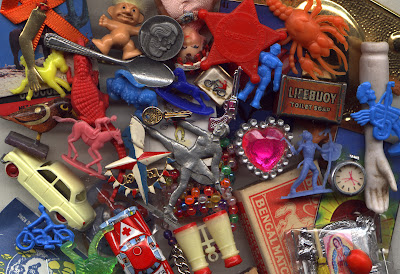 It's quite easy really - just send it all my way! ;¬)
Or maybe just buy one of those big sets of metal drawers that people have in their garages - one drawer for each little collection. I personally would buy some wooden printers drawers and some box frames and display it all.

I'm sorry, Jane, but you are way past helping. They'll make a tv programme about you in years to come, and people will wonder about the cause of this madness (remember Mr Trebus with his fridge full of broken biscuits in the garden?). Yes, that will be you, with your gorgeous little collections (will you still be searching for those brass hands, I wonder?)

Just stop fighting it and keep collecting, because I love them all!

Laughing at Joanna's comment re Mr Trebus. He was such a sweetie.... now come on, lets have a good gander at the "Day of the Dead" stuff please. I am SO enjoying this.......

“Have nothing in your house that you do not know to be useful, or believe to be beautiful."

I don't think William Morris had a clue about people like us....

Just found you through Kitcsch and Curious and love our blog - great collections and your altered postcarsd are fab - very much remind me of Peter Blake's work!

Jane,
You are beyond hope! When I made that innocent comment about sharing our collections I had no idea I was releasing the floodgates... but it has been wonderful and you just keep going girl. Get it all out, photograph it and love it all over again. I have no idea who Mr Trebus is by the way. What did I miss? Lesley x