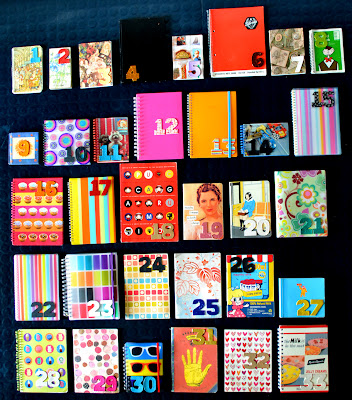 I've just completed my little project to number all my old notebooks. I was intending to scan some pages from them, but half an hour spent riffling through random jotters has convinced me that I am mad, self-obsessed and better off keeping my weirdness to myself.
'Oh, that's disappointing,' I hear you cry, 'we were looking forward to a glimpse into your strangely uneventful life where one of the highlights of your written account of yourself is a list of "Ruth Rendell novels read".' Oh, go on then, if you insist. 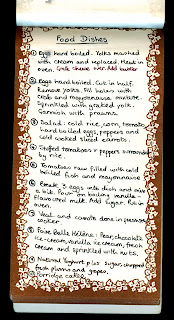 This is a page from notebook no. 2, compiled during my last year at school and while I was spending the year before university as an au pair in the suburbs of Paris. The family I worked for had an odd set-up. Both the parents worked, so they had me and also a kind of vampire home-help who never slept. Mme B had three low-paying jobs to make ends meet: she worked nights in a hospital, she took in dressmaking, and in the mornings she came to my French family's house to clean and to spend the 10 franc coin that they left out each day on food for the evening meal for the five of us (M. et Mme G, their two kids and me). This was very little money and our diet reflected this. Mme B would buy, say, potatoes and eggs, or pasta and a tiny lump of cheese, and then it would be up to me -- me! -- to make it into a meal in the evening. At this point I was a 17-year-old schoolgirl from Yorkshire whose mother hated cooking and whose greatest culinary achievement to date was a cold pork bap.
However, the French family only had themselves to blame if they expected me to put food on the table every night. Mme B would tell me what to do -- 'peel les patates, boil les patates, fry les oeufs' etc -- and I would try to turn out a passable meal. I remember I used to struggle to drain pasta. It was bad.
The list above represents the things I learnt to 'cook' which I actually liked. As this list contains such French delices as raw tomatoes filled with cold boiled fish and yoghurt with grapes, I think you can imagine what the less successful meals were like.
In fact our bad diet had one dominant effect on all of us: it gave us terrible constipation. A few pages on in the same notebook is a list of 'Things to Pack for skiing, 8th February 1980', which includes this item:

I knew enough about the magic of fibre to have got myself a huge box of bran from the local health food shop (I can still remember the French for bran: son). One evening I was bold enough to get my giant box of sawdust out and start tipping it into the yoghurt I was having for pudding. Monsieur et Madame G stared at me for a while. Then I remember that Madame asked if she could see the box. She studied it for a while then went to get a yoghurt. Soon all three of us were munching down bran at every opportunity, so, if nothing else, I take credit for having saved that family from the nightmare of les problemes de transit.
Posted by Jane Housham at 17:22

Hi Jane, I keep forgetting to thank you for commenting so much on my blog. I really love that you do that, thanks so much!

I'm afraid I don't come around to visiting your blog very often. This blogpost is wonderful! Taming your notebooks, what an idea! Great!

Lol!! Too funny Jane! I for one DO think you should share more pages from your now organized notebooks! Come on--don't keep all the weirdness to yourself ;) This is good stuff. I think I'll go find myself some bran 'n yogurt now! --Suzanna

Share more! That's such a funny tale. What a great memory prompt those notebooks would be. Share more! More!

Jane,
You have a great turn of phrase. This is such an amusing read. Henceforth I shall always refer to 'that' word as les problemes de transit. Off to have yoghurt and fruit for breakfast but must get some 'son' for later! Lesley

Brilliant post - very funny!
I definitely want to know more about the contents of those notebooks....

Very funny, Jane - especially as bran features large here as my resident Mother-in-law makes a great thing of whether and how much to add to her breakfast each day. It's know here as 'the medication' which is what she calls it!
I did a spell as a mother's help when I was 19. The family were very upperclass - he the younger son of a titled family - and she had very great ideas about what they should eat, so i was constantly provided with food requests which were well out of my comfort zone at the time. Talk about a steep learning curve!