Yesterday I took another unplanned day's holiday. What decadence!
After going to the Royal Mail depot at 7.15am to post my postcard for our swap (check out the website later to see everyone's first creations), I got an early train to London so that I could go to Bermondsey market. I've always wanted to go to this market which is so redolent of the underground history of London -- I'd heard that it was covered by a special law which meant that the provenance of an object sold between sunset and sunrise couldn't be questioned and so it was a perfect way of 'fencing' stolen goods (this law of 'marche ouvert' was only abolished in 1995, it turns out). To function within this law, the market traditionally opened at 4am.
I didn't get there at 4am, but at about 10am. Early enough for me. In my mind Bermondsey was a Dickensian enclave crouched down below Tower Bridge in a foul miasma off the Thames. In reality it was incredibly up and come, and when I got to the square where the market takes place, it was developed to within an inch of its life with a boutique hotel, some kind of gallery space and a posh cinema. In the midst of all this brand-new smartness (which I don't dislike, don't get me wrong), like a besieged encampment, was the market. I fear it must be in the final phase of its existence, however long it can hang on for. All the stallholders seemed quite elderly and most had their heads wrapped in thick layers of hoods and scarves against the wind, like dwellers on the Russian steppes. The goods on sale were largely silver, watches, cutlery, jewelry -- not really my thing, but I still very much enjoyed the whole experience.
All I bought were a few postcards, of which this is one: 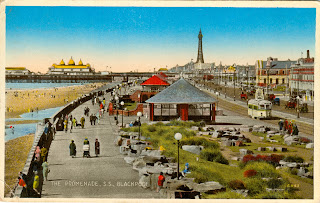 Just now I've been googling the market and found this interesting article, which seems to confirm that the place is probably on its last legs. It will be a shame if it goes because it really is a bit of London history and made me think of Fagin and Bill Sykes. The article mentions Italian traders and in fact there was just such a trader who was desperately trying to sell the stuff on his stall to the man whose stall I was at (slowly going through a box of postcards). My chap was scoffing and shouting, 'If you can't sell it, why would I be able to?' which is a fair point. Then he tried to get me to buy the whole box of postcards (about 300 or more) for 50p a shot (instead of £1 each) but I said no thanks!
Well this was only the start of my day out as next I went to the Hayward to see the Contemporary British Art show. This had me feeling completely perplexed and spaced out. I don't normally feel like this in the face of very modern art, not even at Frieze with its animatronic rubbish heaps and phoney architectural digs, but this was ... really out there. Normally I just take a very simple approach and take what pleasure I can find, without trying to analyse it all very much. But there just seemed to be so very little to get hold of at all, let alone to like or dislike. There was a metal park bench standing on its own, one end looked a little blacker than the rest. A card nearby said that 'at unspecified times the bench will burst into flames and a naked man may attend'. Alas the bench did not burst into flames and no naked man attended. There was a big square heap of soil with some yellow powder sprinkled on top and some little nodules of soap scattered about it. Why? There was a little pile of rolls of sticky tape and some cans of paint. A bulb rotating over a radio and making the radio buzz. There were some more conventional figurative paintings too, including some by George Shaw, who paints in Humbrol enamel. 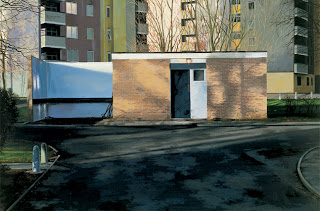 I really like his work. I don't think I've really given a fair account of this exhibition because now I'm recalling more things that I liked, but still there was quite a lot that didn't engage me. But I'm still glad to have seen it because I like to keep up with what's happening.
After that I went out of the South Bank past the Royal Festival Hall, where there was an amazing farmers' market, infinitely superior to anything I've ever seen before, so I feasted on the free samples (naughty me) and a samosa. Then I got the bus to Tate Britain to see the Susan Hiller exhibition. 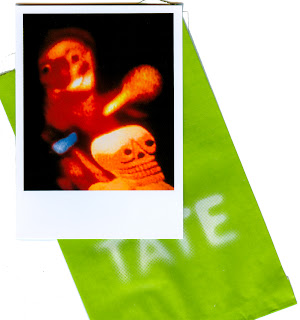 This is the postcard I bought, a still from a film which played on four huge screens simultaneously in a darkened room with very very loud sounds of 'Whose a naughty boy, then?' and other snatches of Punch and Judy dialogue amusingly translated by a ponderous anthropologist voice. The film involved close-ups of Punch beating Judy, or Punch beating the baby and so on, to 'explore' the idea that Punch and Judy embodies deep atavistic violence. I think we all knew that already, but it was quite enjoyable being battered with sounds and images in the dark.
I enjoyed it all quite a lot. I don't know very much about Susan Hiller, who was an anthropologist before she was an artist, or as well as being an artist, but I got a strong feeling about her that she has never really stopped being a 'real person' and been subsumed into an artist 'persona'. She seems like someone with curiosity about the world and who playfully explores ideas and collects things just because they appeal to her.
There was another room where hundreds of tiny speakers hung down from wires in the ceiling and each speaker played a recording of someone telling how they'd seen a UFO (in lots of different languages), so you could wander through this forest of dangling wires, making them swish about and tuning into different accounts. You can see the anthropology in this, but it was also a good aesthetic experience.
Another room, my favourite, had Hiller's collection of postcards of 'Rough Seas' -- hundreds like these ones:

She had carefully ordered them according to place and style of image and catalogued them all. It wasn't profound but I liked the rhythm of the cards in their framed grids. There was also a sweet sequence of frames where she had photographed her baby bump during the course of her pregnancy, looking down her body, so that the bump grew to fill the space of the photo over the ten (lunar) months that she recorded it. I also liked a wall of photographs of memorial plaques to Victorians who had died heroically trying to save people from fires or from runaway carriages and so on. This didn't really feel like 'art' (although I'm not about to debate what I think art is), but just felt as though she was sharing something wonderful that she'd found.
These are some of the plaques: 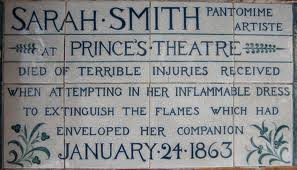 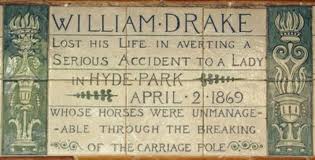 In fact the plaques come from Postman's Park in Clerkenwell, I've now discovered, so this would be something to visit another day.
I had better stop going on at such length. But I had a very stimulating day. No matter that I could barely walk by the time I got home and was in bed by 9pm.
Posted by Jane Housham at 11:31

Brilliant post, Jane - what a day! I really wish I'd been there to also experience these interesting places. Well done you for seeking them out and sharing them with us. Love the postcard of Blackpool promenade, wonderful retro colours.

I received my postcard from Joanna Teague today and I'm v happy! I'll put it on Postman's Knock later. Looking forward to seeing the one you receive from Chrissie.

Sounds like you had a lovely day! How lucky you are to be able to take a day for yourself and have all that rich history around you. thanks for posting.

Hi Jane,
I posted about Postmans Park last year and would love to see it but getting to London from this far west is a non-starter. I have a great book about it that you're welcome to borrow. You seem to have a penchant for postcards. Snap. I love them too. What about the postcards on Postmans Knock. How wonderful they are. Already looking forward to the next posting. Lesley

You certainly made the most of your day out - you have given me lots of food for thought and lots of interesting leads to follow up.

What a wonderful day! I think I share your feelings about that market. What a shame it's no longer like it was centuries ago ... how magical would that be? But, sad it's dying a modern death.

I'm glad to read that you don't gert some 'art' ... sometimes I feel there's pressure on own to come away from all 'art' with some sort of impact. The bench sounds ludicrous, as does the pile of dirt.

Days like yours though are so stimulating and exciting and sensual, really. Lucky you, and thanks for bringing me along via post.

London is wonderful, but so very, very exhausting. Liked your honesty re the contemporary art and not analysing everything. Many years ago I took my (then!) young children to the Hayward and we "experienced" a James Turrell exhibition/installation. He played with light and space in a way that I would never be able to explain to anyone, but it left me in awe of him and its a dream that one day when his Roden Crater project is finished that I will be able to glimpse its interior. With contemporary art I always feel you have to "kiss a lot of frogs............" ;O)

Thanks so much for all these lovely, thoughtful comments. It adds to the experience to have people to share it with like this.