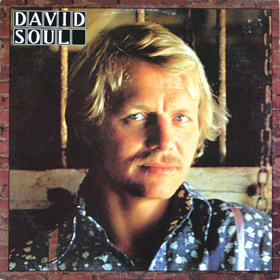 I've finally started doing something I've been meaning to do for months, which is putting all my old notebooks in order and numbering them. I've always had a notebook on the go and I've accumulated over thirty of them, dating back to early 1977, when I was fourteen.
These are just cheap books full of random notes, not diaries, although some of them contain diary-like accounts of holidays and other experiences. There are two from when I was a teenager and then, sadly, there's a gap of about ten years (although I also have diaries which do fill in some of those years).
So I've only got a little way in to the numbering exercise, but the first notebook is full of things that fascinate me. I can remember writing them and living the experiences they refer to, but at the same time they seem to reveal a strange, obsessively organised creature that I don't fully recognise as myself. 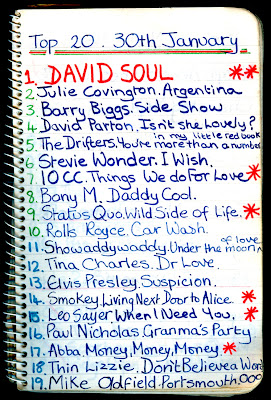 This is my record of the charts for the week ending 30 January 1977. The tracks with the asterisks are the ones I recorded off the radio onto a C46 cassette. David Soul was my idol and gets red pen. Actually it's only the top 19, I see.
It's funny because it wouldn't be long before I was obsessed with the Tom Robinson Band and Stiff Little Fingers and the Fall and wearing a railwayman's donkey jacket and collarless white shirts all the time. But here's a couple of pages from a five-page record of my wardrobe at the time: 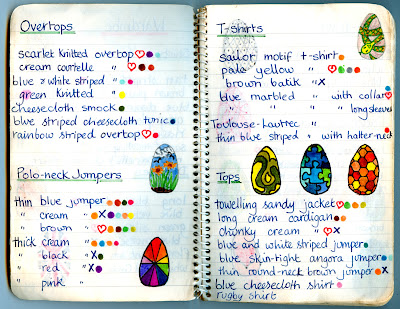 The key at the end explains that a heart symbol means 'best in section', a coloured dot indicates items that make up an outfit and a cross means 'on loan from Mum' (the shame!). This was the era of tunics worn over polo-necks and this was virtually all I wore at the time. I like that I've included the fabrics of some of these clothes -- I remember adoring the feel of towelling tops, which regrettably I didn't keep just for the beach. Courtelle and cheesecloth are also very redolent of this period for me.
The eggs are designs for decorated blown eggshells, which was something I was really into at that time. There are 38 egg designs in total in this book. 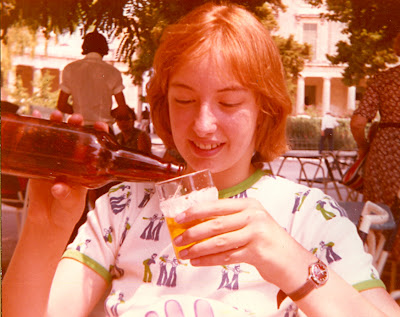 This is me wearing the 'sailor motif t-shirt' mentioned in the clothes list. I'm pretending to drink beer on holiday in Corfu with my mum. 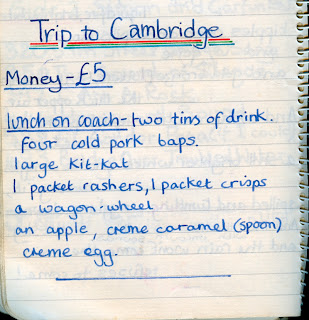 The notebook reveals my appalling diet at the time. And also my great enjoyment of this bad food. Above is my lovingly prepared list of what I was going to take on a school trip to Cambridge -- about a 200-mile journey, but, still, FOUR pork baps! It would not have done to forget the crucial implement for eating the creme caramel. 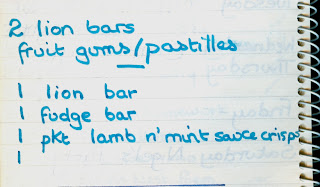 Here's a little shopping list for goodies. Mmm, lamb n'mint sauce  flavour crisps. Not quite as good as tomato ketchup flavour, but not half bad. I must have gone into a daydream over the crisps as I haven't filled in the final item.
Finally, here is the most damning evidence of my piggy lifestyle and lack of fashion flair: a page dedicated to preparations for a special school meal: 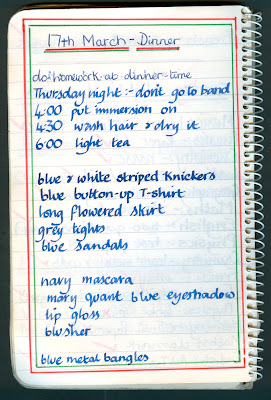 We were having this meal in the evening, but nonetheless I planned to have a 'light tea' at 6pm. And I don't suppose the grey tights with blue sandals won me many admirers. Blue mascara. blue eyeshadow, lip gloss, blusher -- so funny! I haven't worn make-up for years now.

I was a blue mascara girl too. These books are just fabulous! Look at the detail put into them.....

Hi! Well I can't believe I've found someone else who adored David Soul!! LOL - GO US!

What fun. Although I'm a bit older than you, this post took me right back to the seventies. I went through a phase of decorating eggs too, although I didn't share your passion for David Soul!

Boo - David Soul was soppy! David Essex was much better looking and had better songs! So there! Although being a bit older than you, by 1977, my main music love was 10cc. I was slightly obsessed by the charts in the 1970s. I think it was because you had know when you would be able to tape songs off the radio!

Did you have roll-on lip gloss? I still have one of my old ones - I think it's lemon flavour. Like putting a mix of syrup and wet varnish on your mouth!

The older I get, the more nostalgic I get for the trappings of my teenage years....

Yep, roll-on lipgloss in a clear bottle with little fruits printed on it in red, I think. I liked orange flavour and cherry. Completely disgusting stuff!
I was completely fixated on the charts and had a pair of huge headphones for listening in on an almost professional level when waiting to tape stuff. I liked 10CC too, honest. Still love them today. And David Essex.

What a trip down memory lane! I seem to remember a need to keep writing out lists of things too but didn't keep them for posterity. Wish I had as this was so good to look back on.Navy mascara really took me back.... Lesley

These lists are phantastic!!! I really love it - so funny that you were so obsessived with docementing everything so precisely!
I had an enormous amount of diaries, but was throwing the last ones away 2 years ago, because I thought it would be to embarassing, if somebody would found them, when I'm dead and realising how absolutely stupid and ridiculous I was (and still am) ;).

1977 - I was 13 and I too was in love with David Soul. You were such a list maker/recorder of facts/planner, weren't you? I think I was too busy cuddling my dear little guinea pig (RIP Pogle).

I had roll on lip gloss (peppermint flavour) and towelling hot pants!

You've certainly brought back some memories.