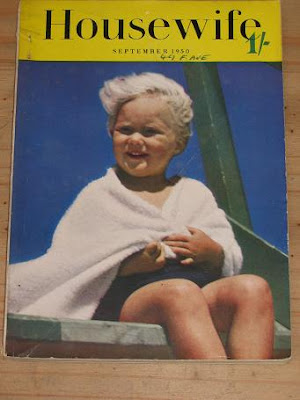 I've been reading a copy of Housewife magazine from August 1950. My copy has no cover, sadly, but above is the cover of the September 1950 issue. It's a magazine I found at my mum's, which no doubt once belonged to her mum (the book alterer) and is full of cheerful 'modern' articles for young mothers coping with the tail end of rationing such as 'Need they quarrel?' and 'Furnishing an Alcove'. The cookery pages have nine 'ways with gelatine', which is about eight too many, in my view. 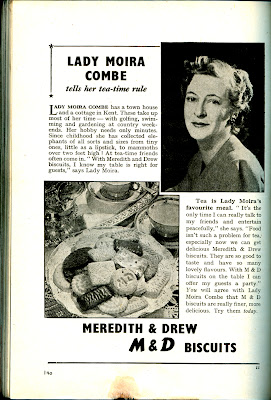 In my search for amusing apercus about this magazine, I have discovered Lady Moira Combe, wife of Sir Ralph Combe and, as such, probably not short of a bob or two. She seems not to have been able to resist the lure of the celebrity endorsement as she appears in this issue of Housewife telling us her 'tea-time rule', which is serving Meredith & Drew biscuits. The ad copy tells us a little about Lady Moira: 'Her hobby needs only minutes. Since childhood she has collected elephants of all sorts and sizes from tiny ones, little as a lipstick, to mammoths over two feet high!' There is some sort of odd subtext going on here, I'll warrant...
I went searching online for Lady Moira's elephants (to no avail) which is when I discovered that she was quite the Carol Vorderman of her day when it came to endorsements. As well as M&D biscuits, she also signed up for Californian Poppy perfume and Silvo polish. I wonder how much she was paid? 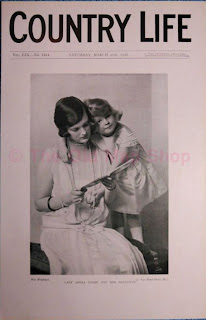 Here she is from an earlier era on the cover of Country Life with her daughter Estelle. 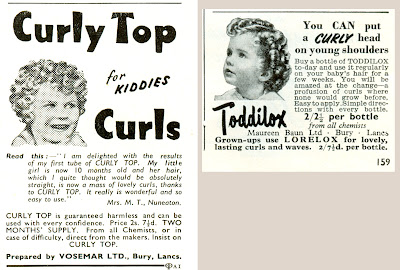 Also amusing me in Housewife are not one but two adverts for lotions to put on your toddler's hair to make it go curly. Curly Top is 'guaranteed harmless', but how did it work if it was not a kind of crude perm lotion? "My little girl is now 10 months old and her hair, which I quite thought would be absolutely straight, is now a mass of lovely curls, thanks to CURLY TOP." 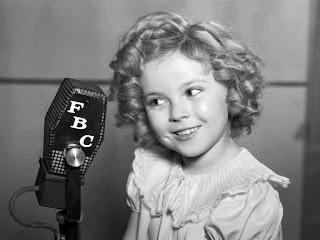 I guess the appeal of Curly Top herself, Shirley Temple, was still strong in 1950.

The final thing to catch my eye in Housewife was this ad for Spirella's corsetry service. The Spirella factory was -- is -- just up the road from here in Letchworth, and it's a wonderful building: 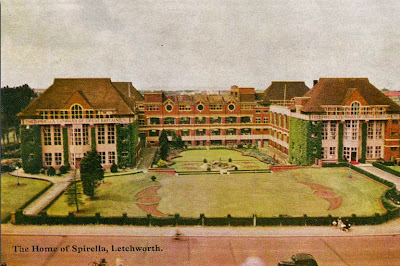 Last weekend I found a copy of their in-house magazine, Threads, on a charity stall in Hitchin market. It's the October 1961 issue, but the corsetry fittings are still going strong and by this time the company were being very proactive, going into women's workplaces to demonstrate "the importance of well-fitting foundations for the working woman". Here they are in a Leicester factory ("Machines were stopped half an hour earlier at lunchtime for the women to see, of all things, a demonstration of Spirella service")  where the wonderfully named Mrs Dewsnap takes a no-nonsense approach to bosoms:
Elsewhere in the magazine there is news of Spirella births ("Baby Susan took her parents by surprise when she arrived nine days early"), deaths ("The death of Miss Eva Jones (Corset Assembly) came as a shock...on holiday on the Isle of Wight...") and marriages ("Dorothy Dellar (formerly Corset Assembly) became Mrs Hankin on September 9"). I was gripped by the story of Miss E Bristow, "a well-known figure in the Garment Service Department", who retires at the end of October. "Singing is one of Miss Bristow's great interests... With a little more encouragement from her family Miss Bristow might have tried singing as a career... She sang over the public address system at Spirella one Christmas some years ago...."

I knew my CD collection was missing something! The Joyful Sounds of Miss E Bristow should be in there.

I bet Mrs Dewsnap was a bra-strap snapper ... all in the name of demonstrating the effectiveness of elastic.

Great post, Jane. Chuckled so much my hair's gone curly!

Jane,
As my Mum used to say 'You're so sharp you'll cut yourself one day!' Such caustic wit - I love it and have had a good laugh. I suspect Lady Esther was pretty sharp too. I'm not sure whether I would have bought anything she endorsed but I could have a soft spot for Miss Bristow - imagine retiring with a longing unfulfilled...... Lesley

"Jane H., a well-known figure in Corsets, amused many ladies at teatime with her gelatine novelties and Curly-Top biscuits. Mrs Dewsnap also attended."